Home » Brandi Glanville Fires Back at Critics of Her Looks (Exclusive)

Brandi Glanville is done with people talking about her looks. The former Real Housewives of Beverly Hills star has spent more than 10 years dealing with commentary about her appearance, reaching her breaking point amid the pandemic.

“I was super depressed and I kind of went offline, I didn’t do any video chats, I didn’t do anything,” the 48-year-old shares with ET, ironically, over video chat. “And then when I finally did an interview in Australia, other people picked it up and were like, ‘Brandi looks completely different. She looks crazy!’ They were so mean.”

Headlines dubbed Brandi “unrecognizable,” with article after article reading as a guessing game as to what plastic surgery or cosmetic procedures the Drinking and Tweeting author may have had done. Ultimately, Brandi felt forced to reveal a private medical accident that left her severely burned and scarred on her face, sharing startling photos on Twitter.

“I didn’t plan on sharing those pictures, because obviously they’re disgusting,” Brandi admits. “I feel like Khloe Kardashian in a less famous way, because people for the past 10 years have been picking on everything about the way I look, everything. ‘She’s plastic. She’s this, too much filler, too much Botox…’ Whatever it is like, ‘She’s so fake!’ It’s been constant, constant. And so I just thought to myself, you know what, guys? Here’s my real struggle. I have burns all over my face and I’m going to have to deal with that scarring for the rest of my life. And please don’t kick me when I’m down.”

Khloe just spoke out against appearance shaming after an unauthorized photo of her made its way online. While fans called the seemingly un-retouched picture “beautiful,” Khloe said it was within her rights to not have a snapshot she didn’t like on the web after years of ridicule about her own appearance.

“Who goes after someone for the way they look?” Brandi asks. “I feel for Khloe because I’ve been going through it, too, for 10 years, no one has anything nice to say. And it’s just like, even if I did get a bunch of plastic surgery — which I will one day — why is anyone else commenting on it? Why is it up to them to say, ‘Oh my god!'”

Brandi says people don’t seem to accept that people they see on TV will age and change over time. It’s not always plastic surgery, fillers or Botox that lead to a difference in appearance.

“I mean, you have your opinion, but don’t put it on me,” Brandi adds. “I do care what my family thinks. I don’t care what haters are saying. I mean, I’m already having anxiety and depression because of the pandemic. I’m on an antidepressant. That kind of thing did not help. I didn’t get out of bed for three days after I saw those articles. I was so devastated.”

Brandi takes full responsibility for the incident that left her scarred, calling it “user error” while operating a special light to help treat her psoriasis. She left the high-intensity rays on her face for more than 17 minutes, when she was only supposed to use the device from her dermatologist for a little over 17 seconds.

“I have psoriasis and during the pandemic it was all over my face, and I’d never had it on my face before and I was covered in it,” Brandi explains. “When you look in the mirror, your face is bleeding and cracked and it’s just disgusting. And so my dermatologist prescribed this light therapy.”

“I didn’t even know —  it doesn’t even feel like it’s burning,” she recalls. “And then I got up and my face was swollen and then blisters were forming and I was just like, oh my god. And then I couldn’t see for three days, ‘cause it burned my retina, it burned my eyelashes off.”

“I’m not going to say it’s anyone’s fault except for mine, but it does suck,” she adds. Unexpectedly, Brandi’s psoriasis battle brought her closer to her ex-husband Eddie Cibrian’s wife, LeAnn Rimes, who bravely revealed her own struggles with the skin disorder last fall. While the pair famously feuded, they’re now in a good place.

“We talk about it all the time,” Brandi shares. “We were talking about it at dinner last night. For a while, she was sharing her medication with me because I didn’t have medical insurance, which is very nice of her, but … we’re two peas in a pod and, yeah, we definitely talk about it.”

Brandi is finding some power in reclaiming the narrative around her appearance, but has one simple request moving forward: Be kind.

“We’re all going through something right now,” she points out. “The last thing we should be doing is picking at each other for anything. If you have a problem with my character, whatever, come after me. But, if you just want to be mean to make me feel bad about the way I look, no thank you. I feel like, be kind. That is really what it comes down to, remember we’re all human beings and it does affect us.”

“What if someone was in a car accident and their face is all messed up, and you assume they have plastic surgery and then you go after them?” she asks. “They’re already depressed because they’re trying to heal. Don’t go after people’s looks or anything. The color of their skin, their sexual orientation, that’s off-limits, period.”

Brandi is hoping for a more loving world once the pandemic ends. She’s spent the last year trying to figure out her next move, texting Andy Cohen about potentially joining Bravo’s Chat Room for at least a guest spot — “Come on, people! Mama needs work,” she quips — and studying for her real estate license.

“I actually just finished my real estate courses,” she confesses. “I was just so bored during COVID. I did not know what to do with myself, and I was getting depressed because I felt like I was doing nothing. So I just thought, I’m a very honest person. Maybe people would want to buy houses from me because I’m honest?”

Becoming a realtor could open more reality TV doors for the star, though she’s not sure she’d want to go down that route. When asked about potentially joining Netflix’s Selling Sunset, Brandi says she doesn’t want to have to fight with friend Christine Quinn.

“I adore her,” she gushes. “[And] I don’t think she needs me tagging along. She’s doing pretty well herself.”

Brandi can currently be seen on a different Netflix show, though, the sitcom Family Reunion. She guest stars in a Part 3 alongside Kenya Moore and Candiace Dillard in an episode that spoofs The Real Housewives. Brandi says she pulled inspiration from The Real Housewives of Orange County alum Heather Dubrow for her character, Heidi.

“Honestly, I just wanted her to be completely pretentious and obnoxious and catty — and that’s not who I am, honestly, it’s not — but I kind of felt like it’s some of the other Housewives that right now,” she cracks. “So why not take the opportunity to be like a snobby?” 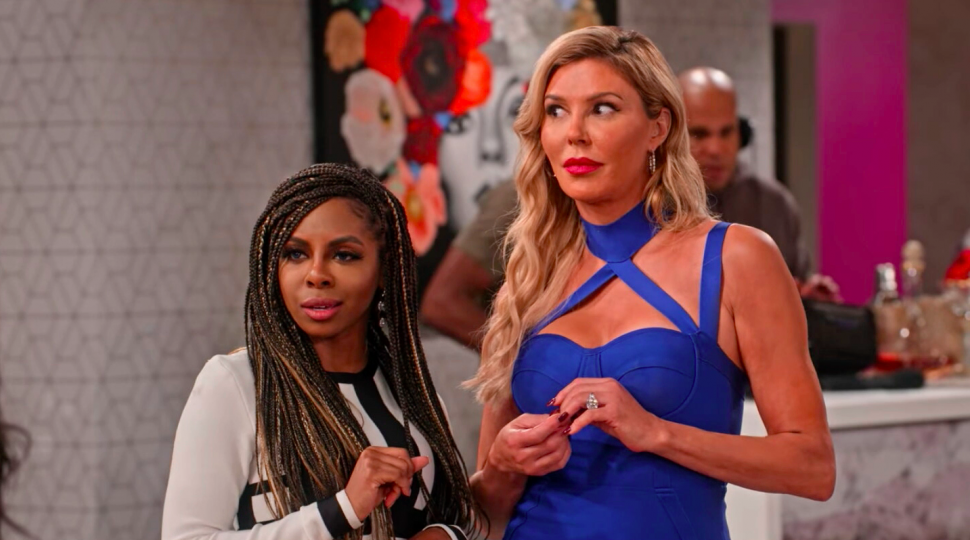 “[Heather’s] so together and uppity, but in a good way — I like her, but I just felt like she’s got that snob appeal,” she adds. Brandi also says she’s down to return anytime Netflix calls.

“Those actors are so committed and they’re so good, and everyone was so nice — and you don’t always get that,” she points out. “I’d been on acting sets before where there’s a lot of attitude. So it was just really refreshing. Everyone was nice. Everyone was willing to help and suggest ways to do things. And it was just, it was great. It was like a family.”

Speaking of family, Brandi is asking for help when it comes to her extended one. Her hair and makeup artist, Mark Hasche, is currently battling pancreatic cancer, with medical bills exceeding $350,000.

“Mark is my best friend,” Brandi says. “He was starting his transition from a male into a female. I mean, he was on hormones. That was the idea, we were going to do this journey together, and he wasn’t feeling well. He went into the emergency room and basically never left.”

“He’s going to start really aggressive chemo,” she continues, “and during the pandemic, he lost his medical insurance because he wasn’t working. So, I wanted to do something to help … so, I started a GoFundMe and I said I’m going to try to raise $50,000.”

“It breaks my heart,” Brandi admits. “I not only want to help him with his medical bills, I want him to be able to then go and get the surgeries that he wants to get so that he can, for God knows how long, live his true, authentic self as Mia.”

To learn more about Mark’s battle, visit this GoFundMe page. All episodes of Family Reunion are now streaming on Netflix, and you can keep up with Brandi on Twitter, Instagram and through her podcast, Brandi Glanville Unfiltered, available anywhere you listen to podcasts.