Let’s start with: Correlation is not causation. (Listen to your imploring math teachers, kids; the ramifications of shoddy data science are no joke.) And yet, when the most popular band in the world releases a song primly named after a pantry staple, one has to wonder — by which I mean, I may have been the only person who wondered — whether it packed enough of a Pavlovian punch to actually influence purchasing patterns of said pantry staple.

On May 21st, BTS released “Butter” as a single. The earworm made immediate conquest of music charts; it came in at Number Two on the Rolling Stone 100 Songs Chart with the second-highest debut of 2021 (beat out only by Olivia Rodrigo’s “Drivers License”) and with the highest debut of the year by song sales. And in the week after May 21st, U.S. butter-sales volume jumped 30 percent higher than in the same week in 2019, Alan Bjerga, communications lead for the American Butter Institute and the National Milk Producers Federation, confirms to Rolling Stone, citing numbers from the butter and butter blends syndicated database of research firm IRI. The group used the year 2019 as a baseline comparison for 2021’s butter sales because 2020, with consumer trends stricken by Covid-19, was such an outlier: The pandemic’s rapid roll across the spring and summer spurred heavy bouts of panic-buying and stock-piling of pantry items, and butter — a staple of Western kitchens that papers of record have declared a love language in and of itself — was also an essential ingredient in the lockdown baking craze.

Might butter’s uptick at the end of May 2021 be a direct bump from the ferocious foothold of “Butter” on American audiences, subliminally triggering salivary glands and sending people flying straight from cars — where “Butter” had been making ceaseless circuit on pop radio — and into Kroger and Safeway dairy aisles? Caveats here: Bjerga notes that, per his organizations’ tabulations, butter is generally bought with some regularity by some 74 percent of American households every year. “Pre-pandemic, U.S. per-capita butter consumption was already going up steadily, and in 2019 was at its highest since the Sixties,” Bjerga says. “So, butter’s been heating up for awhile.”

So while we can track release dates against retail sales, there is no definitive way to actually attribute butter sales to “Butter.” But studies have found that grocery store decisions are quite malleable, and spending levels are often influenced by the music piped into shoppers’ ears; the company Soundtrack Your Brand, which dubs itself the “Spotify of background music” and conducts research for multinational restaurants, has even tied particular genres and BPMs to consumers’ desire for certain foods over others, so take that as you will.

As of July 2nd, “Butter” has been lodged at Number Two on the RS 100 for seven consecutive weeks. To date, the song has seen almost 86 million on-demand audio streams. BTS’s previous major hit was “Dynamite,” in August 2020. We haven’t yet inquired anywhere for comparable analysis on that subject. 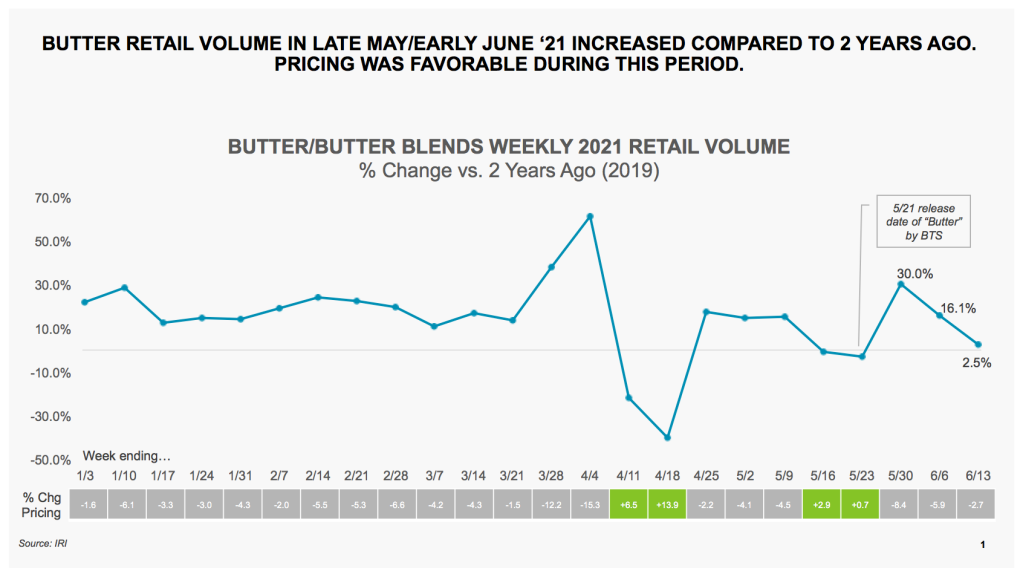 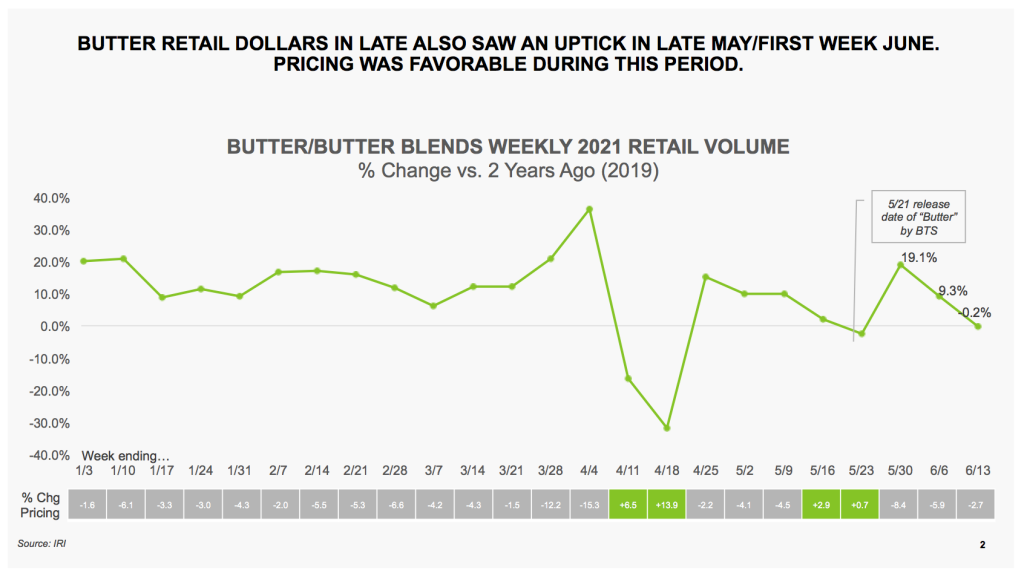