After six days, he’s finally done it everyone: Greg James has got his Radio 1 show back.

In what you may call puzzling scenes, on Wednesday morning, while presenting his Breakfast Show from Brighton, Greg was told that he was being kicked off the show with immediate effect, with Scott Mills and Chris Stark taking the reins.

And that’s where they stayed for the remainder of the week and into Monday morning.

For those not across the shenanigans of the past week, in order to win his show back, Greg had to complete a giant jigsaw with the help of his listeners, travelling across the UK in search of 20 giant jigsaw pieces which were scattered in secret locations.

From diving from a 10-metre board on The One Show to braving a shark tank to collect another puzzle piece, poor Greg has been put through the wringer to get back on his beloved morning mic.

And come 8am today he’d managed to find 19 of the 20 pieces required to complete the jigsaw and get the keys back to his radio show.

Want to know where the final piece was? Just meters away, buried on Brighton Beach, in a move Greg called ‘the final insult’. 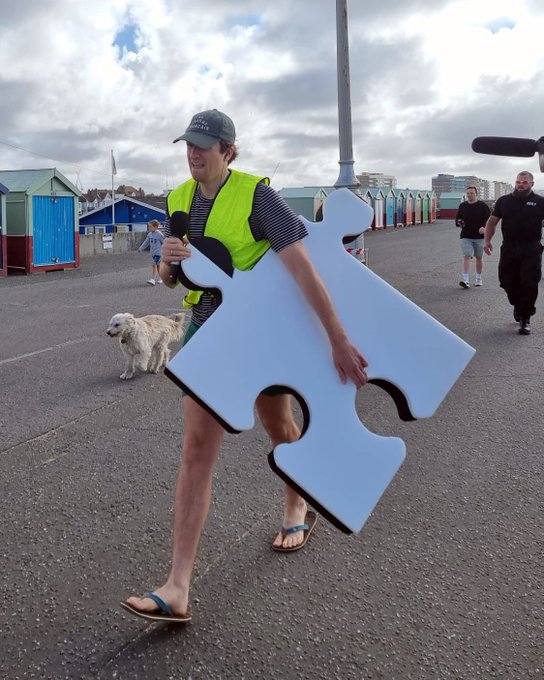 The presenter was left standing in the lagoon in his waders on Monday morning, with the Gumbrell family en route to Brighton with the ice block piece from Cardiff to help Greg finish this mad puzzle.

In a Radio 1 statement, Greg was given a clue as to where the last piece lay: ‘Greg, you are a beacon of hope for the whole nation. We’re sure you can detect what we mean with this subtle clue.’

Picking up what they were putting down, Greg said: ‘Detect! It’s buried. Metal detector. It’s gotta be buried on the beach!’

Around 9.15 Greg finally found the final piece of the puzzle which had been buried on the beach and, walking along the footpath with the piece proudly tucked under his arm he placed it into the jigsaw and, well, job’s a gooden.

Branding it ‘nonsense’ Greg revealed there was a crowd gathered on the piece as he asked them each to ‘bless the puzzle’ while he prepared to get it into place.

He said: ‘Frustration has been a big part of my week,’ calling the fact the final piece was buried just moments away from him ‘the final insult’.

The man even got a ‘stress sty’ in his eye.

This all began last week when, after being escorted out of the Brighton studio by security, Greg was told that in order to get back into his studio he must complete a giant jigsaw puzzle, with pieces scattered around the UK.

Harnessing the power of his listeners (who had already updated the Breakfast Show’s Wikipedia page to include new hosts Scott Mills and Chris Stark) to help him retrieve the pieces Micah in Wrexham discovered a piece in a local record shop while another was found in Land’s End and at the other end at John O’Groats in Scotland.

Sam Fender even had one in the background of a video, while Rosie Jones had one at Latitude Festival.

With another found at Hadrian’s Wall, and listeners offering to fly and drive the puzzle to Greg, he pleaded on air: ‘We just need very kind people who are really invested in nonsense and up for a laugh.’

Pieces were also found in Coventry and in the background of ITV2’s Aftersun, with Radio 1’s Dean McCulloch tasked with bringing them to Greg.

A tweet celebrating the mighty win for the presenter, and the end of this madness read: ‘The #Radio1GiantJigsaw 🧩 is COMPLETE 🎉

‘There were 20 pieces scattered across the country, at festivals, in ice, on TV shows and in a shark tank but @gregjames found the lot and got his show back👏.’