Upon finding herself being a trending topic on Twitter, the ‘A Long Walk’ songstress says that she expects ‘this energy’ from social media users when she releases any movie, album or TV show.

AceShowbiz –Jill Scott has reacted to a rumor that her sex tape has been leaked online. Taking to her social media account, the “A Long Walk” songstress responded to the chatter, noting that she was surprised over all the commotion.

On Wednesday, January 5, the 49-year-old singer tweeted, “Say word!?! I expect this energy when my new movies, albums and tv show drop.” Reacting to the rumor that has become a trending topic since Tuesday, she added, “Ya’ll too much,” and included hashtags that read, “#headedbacktowork #hydrate.” 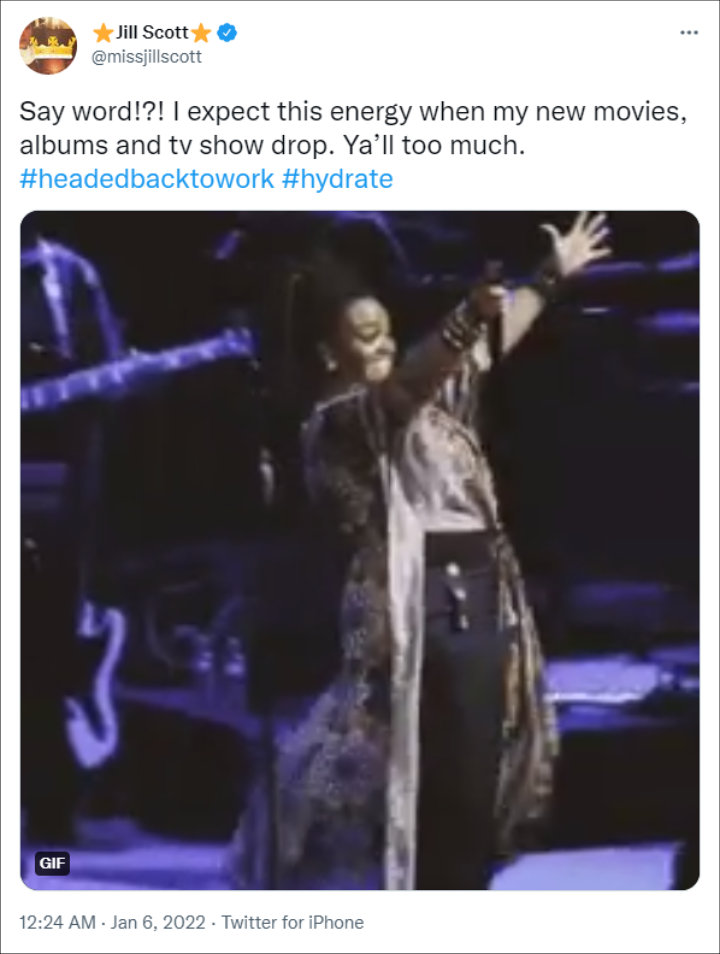 In response, many of her fans showed their support. “You already know I’m there. If you drop anything. Movies, shows, albums, crumbs I’m there,” one supportive fan replied to her tweet, while another gushed, “I can’t never stop thinking about you and I love your music and movies you make me melt every time I see you I don’t want your money or anything I want you that’s all.”

The social media frenzy started after one Twitter user claimed that the “Woman” singer has a sex tape floating around the world wide web. “Jill Scott sex tape? Somebody link me please,” the said person tweeted, setting off a firestorm of reactions.

Into Tuesday night and throughout Wednesday, fans shared tweets, GIFs and videos about their desperate attempts to track down the alleged tape. “Jill Scott gotta sex tape?????” one wrote via Twitter. “N***as out here down bad tryna find this Jill Scott tape…,” another chimed in.

Others, meanwhile, seemingly pissed off as it was only a rumor after Jill broke her silence. “So it was a rumor…,” one commented, adding a GIF sticker that saw a man with teary eyes. “Soooooo we not getting the sex tape,” someone else added.

In the meantime, some Twitter users noticed that Jill called those who tried to seek her alleged sex tape “thirsty.” One person said, “She straight up called our a** thirsty & kept it Pimpin the whole post. Gotta Love ya some Jill,” adding a face with tears of joy emoji. Another quipped, “I was definitely ready to hydrate.”