Travis Barker’s ex-wife Shana Moakler previously alleged that Kim Kardashian had an affair with the rocker years before her older sister Kourtney.

Kim Kardashian, 40, is setting the record straight on those rumors swirling around her and sister Kourtney‘s boyfriend Travis Barker, 45. The SKIMS founder cleared the air via her Instagram story on Wednesday, May 26, after a fan asked directly if Kim had “hooked up” with the Blink 182 drummer. “NO! False narrative!” Kim replied back. “We’ve been friends for years,” she went on.

Notably, Travis neighbors the KarJenner clan in Calabasas, and often hung out with Kourtney, 42, before they struck up a romance. “I’m so happy for him and Kourt,” Kim, who is in the middle of a divorce from husband of almost seven years Kanye West, added. The direct question came in response to the KKW Beauty founder letting her 224 million followers know she was “getting her nails done” and had “time” to answer “anything.” 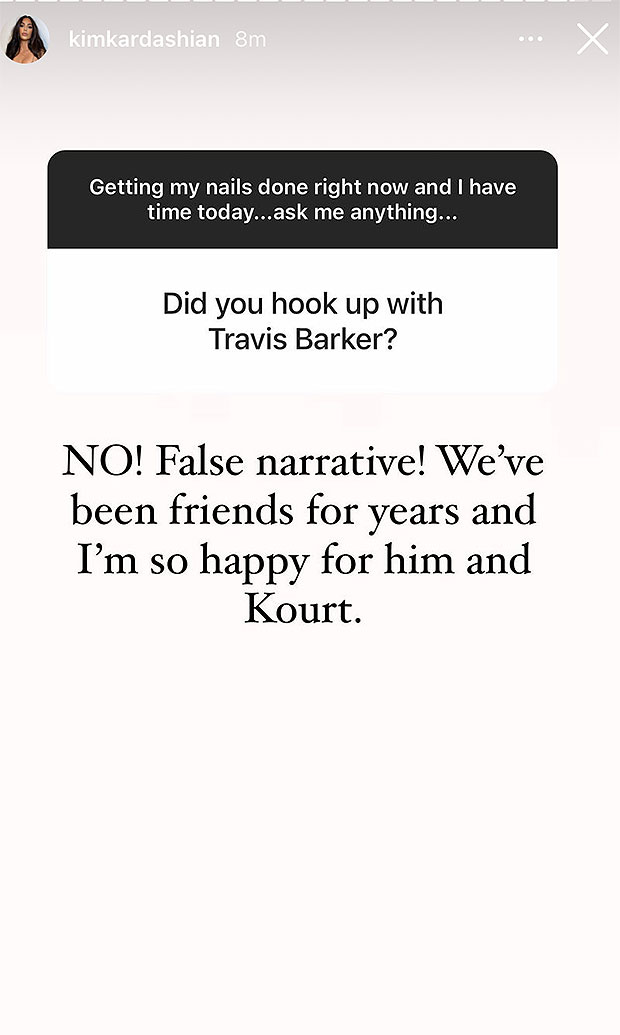 Kim’s response comes after Shanna Moakler seemingly shaded Kim outside of JOEY’s Woodland Hills restaurant last weekend. “My family is broken because of this family and now my kids and I are alienated from each other because of another sister in the family, so yay for me,” she said to TMZ, alleging a past relationship with Kim and Travis, as well as referencing her strained with her kids her kids — son Landon Asher Barker, 17, and daughter Alabama Luella Barker, 15. The blonde then added, “thanks for destroying my family” — a comment seemingly directed at Kourtney. 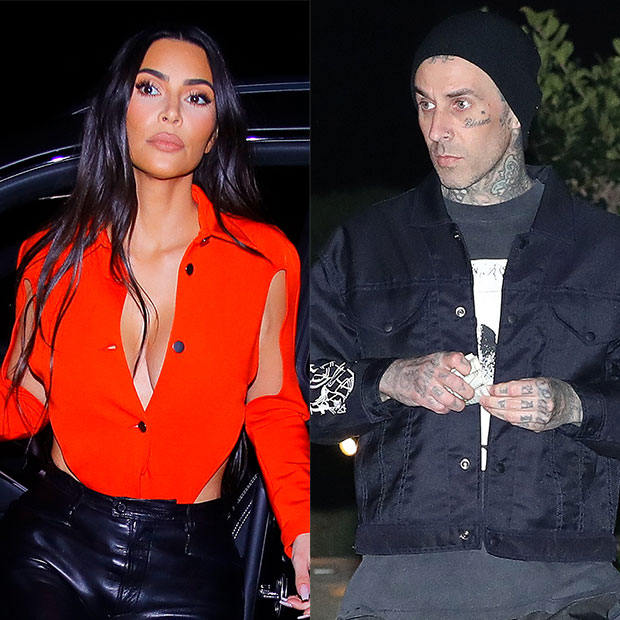 Travis and Shanna — who was known for competing in pageants like Miss USA and Miss Universe — tied the knot back in 2004. Their four-year marriage was documented on the MTV reality show Meet The Barkers, but the couple ultimately split in 2008 — which is when Shanna seems to allege that Travis had a romantic encounter with Kim. At the time, Kim would have been one season into Keeping Up With The Kardashians, and dating NFL star Reggie Bush. Reggie and Kim dated on and off between 2007 and 2010.

Meanwhile, Kourtney and Travis seem to be happier than ever! The couple regularly share photos and updates about their relationship on social media, including some super sexy PDA. The Poosh founder and the rocker recently took a romantic getaway to Utah’s Lake Powell, where Kourt sizzled in a thong bikini as she kissed her tattooed beau. On May 22, she also skipped sister Kendall Jenner‘s tequila party to support Travis at his Las Vegas area show.