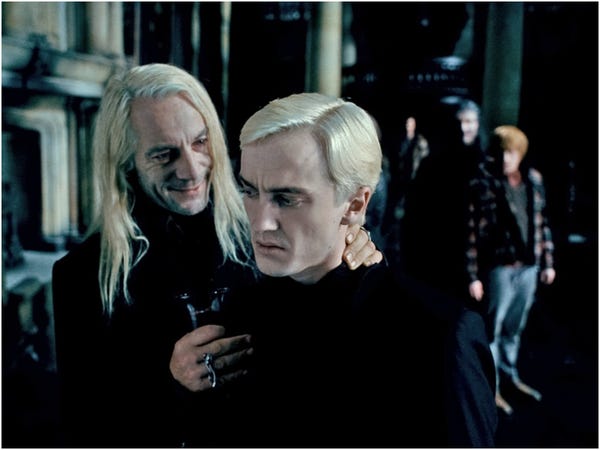 Felton turned 33 on September 22, and Isaacs wrote: "Holy hairy heroes son — you're Jesus's age today! In these strangest of dark days you're always a ray of light to me. Thanks for making mischief, music and magic for this fan (and all the others too). Happiest of Birthday Bonanzas Love ya kid Fake Dad x."

Felton, who is good friends with Isaacs and frequently connects with his "fake dad," replied: "Love you dad x."

Fans were thrilled to see the Malfoys reunited, even if it was only via Twitter, with one user writing: "Don't mind me i'm just sitting here crying because this is so beautiful. The 'fake dad' Made me miss the malfoys ever more."

Another fan wrote: "Your relationship is the loveliest thing ever, my heart is melted."

Felton and Isaacs shared the screen together in six different "Harry Potter" movies — all but "The Sorcerer's Stone" and "The Prisoner of Azkaban." Isaacs first appeared in "The Chamber of Secrets," while Felton appears in all eight movies.

Off-screen, the two actors have a good relationship. Over lockdown, they had a virtual reunion as part of a campaign for the British Red Cross charity. Isaacs and Felton spoke over video chat about their life in lockdown, with Isaacs posting the video to his Instagram: "Malfoy Family Reunion. Sharing lockdown life."

The two Malfoys spoke about various lockdown topics, including Netflix's "Tiger King," with Felton revealing he randomly met Joe Exotic whilst shooting a film a couple of years ago. Felton also revealed that he, despite appearing in one of the biggest fantasy franchises himself, had never actually seen a "Star Wars" movie in his life.