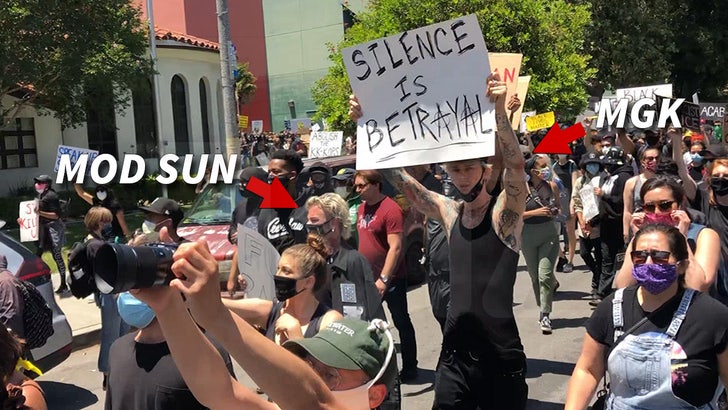 3:59 PM PT — There are even more celebs than we initially thought out in L.A. protesting the death of George Floyd — including, but not limited to, Emily Ratajkowski and Halsey.

Em posted some shots she took from the hectic scene Saturday — and Halsey’s still streaming live on Instagram right now. Not only that, but a new curfew has been put into place in Los Angeles by none other than the Mayor himself, Eric Garcetti.

He says, “We will always protect free speech and Angelenos’ right to live without fear of violence or vandalism. To increase safety for demonstrators, law enforcement and all citizens of Los Angeles, we are putting a curfew in place from 8 p.m. to 5 a.m.”

Machine Gun Kelly is one of a handful of famous faces on the ground in Los Angeles protesting George Floyd‘s death … and he’s making his voice be heard loud and clear.

MGK was spotted marching with a bunch of other L.A. normies who took to the streets Saturday as part of the latest rounds of protests decrying George’s killing. Kelly had a mask on, but you could easily tell it was him. We’d recognize those tats anywhere. 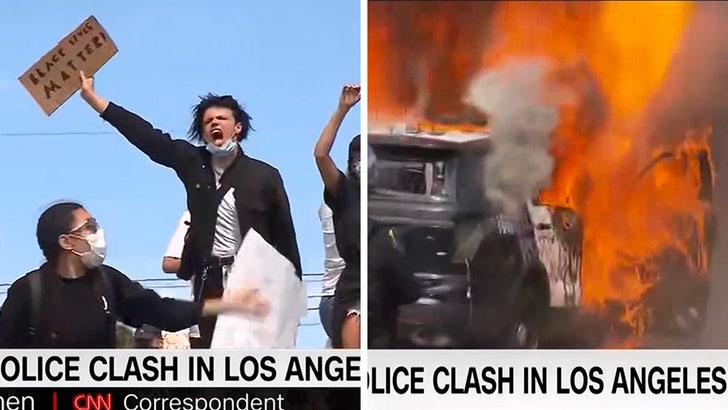 He had a sign with him that read, “Silence is Betrayal.” Looks like fellow rappers/pop stars, Mod Sun and Yungblud, were with him too. No sign of Megan Fox, though. In any case, it certainly proved to be a rowdy affair … someone set a cop car on fire at one point.

Kelly’s presence probably shouldn’t too much of a surprise. He posted a heartfelt message on the situation Friday, making it very clear where he stood on this.

MGK wrote, “If you look like me and you have racism in your heart, and on your mind, and coming out your mouth, f*** you. I’m ashamed of you. If you enjoy my music or you like my movies, I don’t want you watching, I don’t want your business. F*** you. I don’t want nothing that’s a part of the evil agenda…step up and speak out for our fellow people going through all this hell right now.”

BTW … halfway across the country, there was another celeb sighting … J. Cole! The MC was spotted joining a protest in downtown Fayetteville, NC — his original stomping grounds.