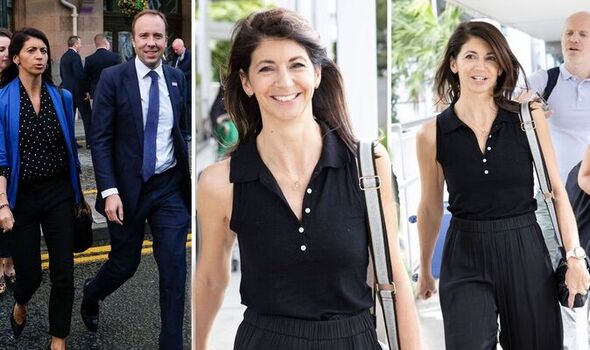 Matt Hancock’s girlfriend Gina Coladangelo has landed in Brisbane to show her support for the MP on I’m A Celebrity… Get Me Out Of Here!.

The marketing and communications director was spotted checking in at London’s Heathrow earlier today.

After a stopover in Singapore, the 44-year-old was all smiles as she finally landed Down Under ready to reunite with her partner.

For her airport attire, she opted for black clothing consisting of a plunging top, relaxed trousers and trainers.

Speaking to The Mirror’s Mark Jefferies on arrival, she said of Matt’s time on the show so far: “I have been watching the show, it would be difficult not to be impressed he has done really well.”

Asked about him taking on the gruesome Bushtucker Trials, she added: “He is made of tough stuff, it is hard not to be impressed. But it is good they are sharing them round now.”

Gina went on to say she had missed her partner during their weeks apart.

On the dynamic in camp, which has sometimes seen Matt be quizzed by his campmates, she added: “They all seem to be getting on OK.”

Speaking to his fellow contestants on the show recently, the MP said he broke his own social distancing guidance due to falling in love with Gina.

He told Babatunde Aleshe: “I messed up and I fessed up. I resigned and it’s no excuse but I fell in love, right? That also had a lot of other consequences obviously.”

He and the mother-of-three were caught kissing on CCTV last year, which led to him to resign as Health Secretary.

The pair were both married at the time of their smooch and have now stayed as an item.

This year the friends and family – and contestants once evicted – will no longer get to stay in the luxurious Palazzo Versace hotel on the Gold Coast.

In a major shake-up by ITV, they will instead be staying at JW Marriott Gold Coast Resort and Spa.

The hotel is close by to the Versace hotel but it is thought to be costing ITV less money for the accomodation.

‘It’s hard not to be impressed’

Matt Hancock will reportedly earn £400,000 for his stint on I’m A Celebrity… Get Me Out Of Here!