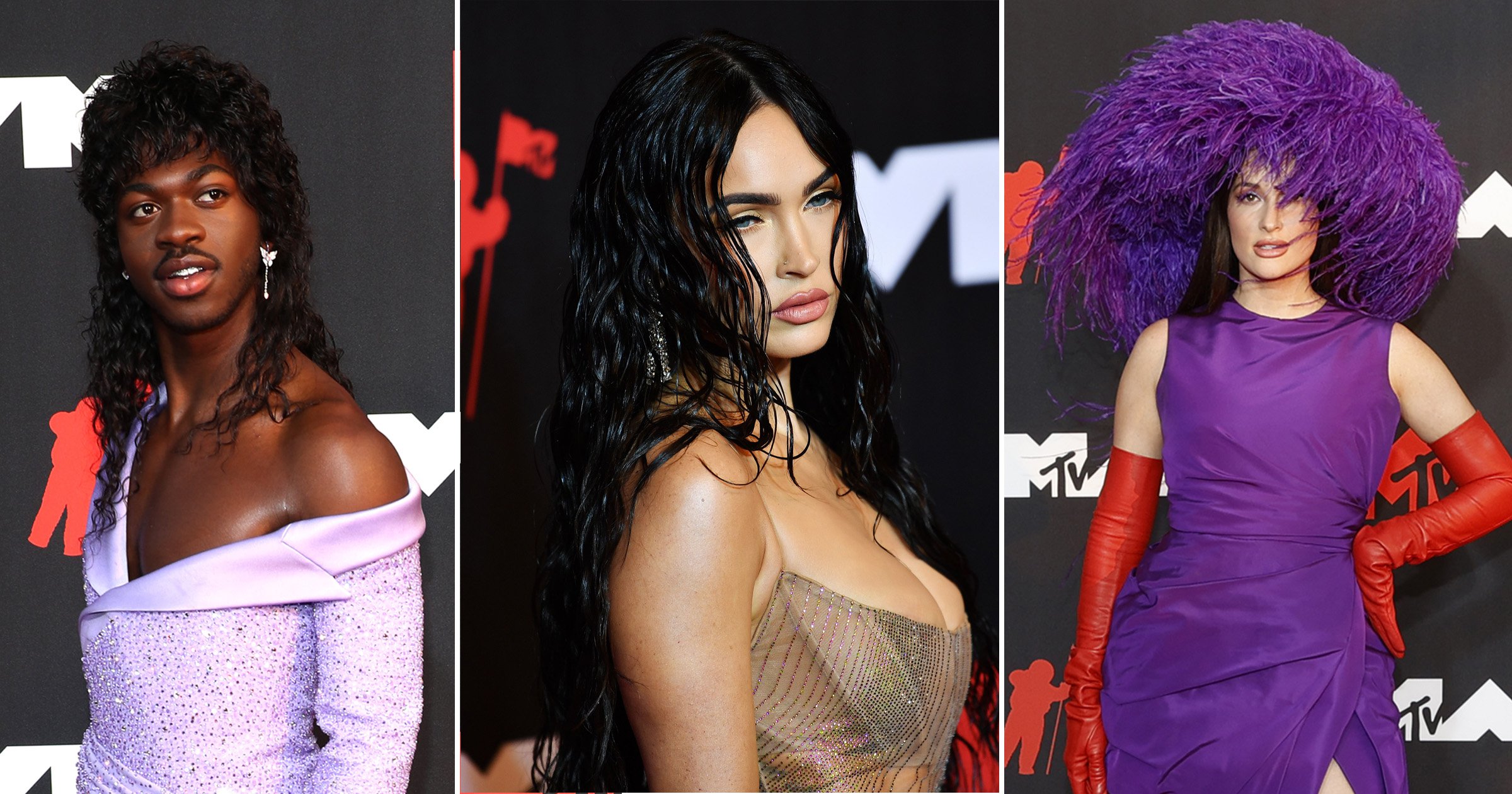 Megan Fox led the glamour at the 2021 Video Music Awards – and boy, was there glamour.

Well, if you can’t wear bedazzled pants to the VMAs, when can you?

The 36-year-old arrived at the Barclays Center in Brooklyn, New York, in a fully sheer dress from Mugler, which was intricately beaded with glittering threads.

Megan made sure the dress was safe for work with her thong and nude bralette, and teamed the statement piece with wet look hair and a pair of gold heels.

The actress posed for the cameras alone before joining boyfriend Machine Gun Kelly, who went all out in a red sequinned suit and pearls glued to his face.

While the couple often compliment each other’s looks on the red carpet, the 31-year-old rapper knew he’d been beat this time around, saying: ‘It’s 50/50, this one she took the lead. I get the pleasure of having her on my arm all night, and she’s beautiful.’

Megan’s look was just one of the standouts of the night, with the colour purple proving popular for attendees.

Video of the year winner Lil Nas X was serving us Prince goes to prom in his Atelier Versace look, consisting of a lavender off the shoulder blazer and trousers, accentuated by a swathe of fabric that acted as a train.

Also in purple on the red carpet was Kacey Musgraves, who teamed her simple Valentino mini-dress with a fabulous purple feathered hat.

The 33-year-old, who performed her new song Star-Crossed on the night, made sure she drew attention with her quirky headpiece, and further accessorised with a pair of elbow-length red gloves.

The night’s host Doja Cat played with different shades of purple and plum, in a Vivienne Westwood bustier beneath draped purple fabric.

The 25-year-old added a prehistoric vibe with her chunky pebble jewellery, but modernised the look with thigh-high burgundy latex stockings and platform heels.

Other stars to walk the red carpet included Shawn Mendes, who looked chic in an all-white ensemble, and his girlfriend Camila Cabello, who played up to her Cinderella alter ego in a pink and red gown featuring a bustier and a large bow on the hips.

The couple walked the red carpet solo, after previously attending the Cinderella premiere together.

Kourtney Kardashian embraced her inner rock chic in a leather mini-dress with corset detailing as she made her red carpet debut with boyfriend Travis Barker, who donned a black suit with silver spikes on his knees.

Lil Nas X, Olivia Rodrigo, Justin Bieber and BTS were the biggest winners on the night, with Montero (Call Me By Your Name) winning video of the year.

VIDEO OF THE YEAR

ARTIST OF THE YEAR

SONG OF THE YEAR

PUSH PERFORMANCE OF THE YEAR

GROUP OF THE YEAR