Verdict: Tough gig, but someone’s got to do it

That at least is the premise of Anthony McCarten’s absorbing new play, which stars Nicholas Woodeson and Anton Lesser and speculates on the inner lives of our current Pope Francis and his predecessor, Benedict.

You might suppose that the pontiff at least had a hotline to the Big Fella upstairs. But Lesser’s Benedict laments that one of the agonies of the job is that God is inclined to give him the silent treatment, too — same as anyone else. 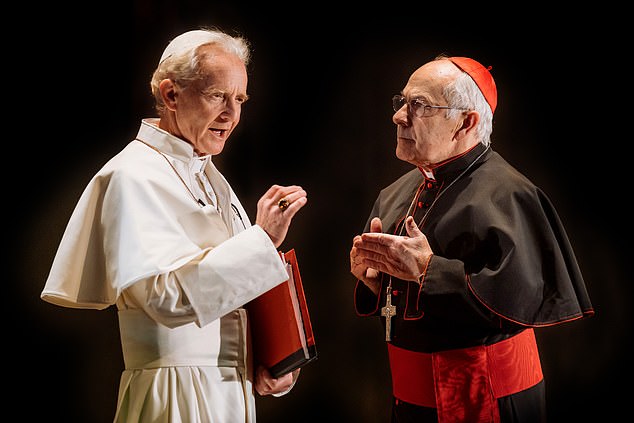 Vatican two: Anton Lesser (far left) as Pope Benedict and Nicholas Woodeson as Pope Francis. James Dacre’s production does the play and the Papacy much credit, with a serious but not austere design by Jonathan Fensom that frames the stage in a succession of warmly lit marble arches

What this Benedict laments most, however, is not his loneliness but his shortcomings as a leader who feels he was only appointed to secure the status quo.

Lesser, fresh from playing the scheming Qyburn in Game Of Thrones, portrays Benedict as a benign but troubled, intermittently fierce soul who rues that he is patronised by the Fitbit he wears to monitor his health. He just wants to be left to study, play the piano and eat his beloved Bavarian noodle soup.

Appointed Pope in 2005 aged 78, he chose to retire in 2013, citing his age, pacemaker and blindness in one eye. It caused alarm and amazement . . . Popes are expected to die in office and not a single one had resigned in 700 years.

But the big question is why a conservative Pope, sometimes referred to as God’s Rottweiler, wanted to hand over to Cardinal Bergoglio. Bergoglio was associated with Marxist ‘Liberation Theology’ practised by some priests in Argentina during the resistance to the Seventies military dictatorship.

No whippersnapper himself at 77, Bergoglio was a man with one lung and a colourful past. He worked as a bouncer in his youth and proposed to a girlfriend telling her he’d become a priest if she said no . . . the rest is history.

One of his miracles is to have worn the same shoes for 20 years; and Woodeson presents him with smiling warmth as a man of the flesh committed to serving the poor.

Both men have sweet friendships with nuns (Lynsey Beauchamp and Faith Alabi), but both are riven with guilt. Benedict at the inadequacy of his personality (apologising for his German sense of humour) and Francis for letting Argentina’s junta off the hook.

These are all fascinating speculations, but as a Catholic myself I wished the play had drilled down into issues facing the Church, including divorce, condoms, infighting, celibacy, abuse and the future.

Instead, McCarten (who wrote the screenplays for The Theory Of Everything, Darkest Hour and Bohemian Rhapsody) prefers biography to debate.

James Dacre’s production does the play and the Papacy much credit, with a serious but not austere design by Jonathan Fensom that frames the stage in a succession of warmly lit marble arches.

Dacre cannot, however, resist the temptation of portentous thunderclaps and dry ice wafting about the stage in lieu of incense. The choice of ecclesiastical music between scenes is also a little hokey, but I suppose anything more Protestant and restrained would have been out of the question.

Happily, what remains of the play and its eloquent performances is a terrific sense of the humanity of the Popes — and of their corresponding compassion for humanity.

Falstaff’s fun, but by Harry it’s a long haul

Verdict: Once more unto the wooden benches dear friends, once more 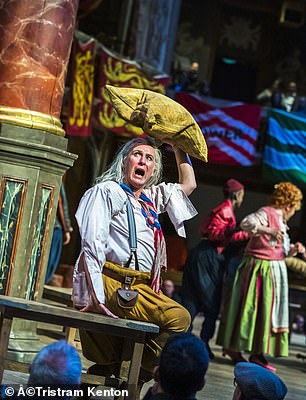 A riot: Helen Schlesinger as Falstaff. During the second instalment of this three-part, eight-hour, Henry-a-thon, I realised what a decent hustle The Globe has got going here

During the second instalment of this three-part, eight-hour, Henry-a-thon, I realised what a decent hustle The Globe has got going here.

A steady stream of bemused American and Japanese tourists stumble into this faux-antique theatre an hour or so late, then wander out even more confused 20 minutes after that.

They get a tut from the tabards on the door and the more serious punters who have brought flasks, nuts and their own copies of the text.

Frustratingly, I fear the travellers have it right on this one. It’s a long, unforgiving outing, this ‘Trilogy day’.

The Globe’s wicker basket of an auditorium rips out all truth and emotion, leaving us with an unsatisfying Shakespeare a la Panto.

The plays take us from wayward Prince Hal in Eastcheap through to warring King Henry V at Agincourt. Rebellion, ascension, victory.

Part 1 is decent enough. Michelle Terry (the theatre’s artistic director) is thunderously good as the rebellious Hotspur. You can see why she’s in charge. She’s a rare bit of heart and heat on this stage.

Helen Schlesinger, too, gives us an excellent Falstaff. She has such sharp comic intelligence and clarity with the stodgy old gags.

Plus, she knows how to work a crowd — nabbing drinks, giving us cheeky asides. A clown often lost in translation is genuinely funny here.

Part 2 is a nothing play — a difficult second album which Shakespeare churned out with an eye on the till. It’s boring, but keeps keen academics entertained.

A mush of sketches rehashes the clash of pub and court from Part 1. But if you boiled it down to the pure plot, we’d be in and out in 20 minutes, along with the bewildered tourists.

Henry V, usually the most rousing of the three, also disappoints. The issue is Henry (Hal in the first two parts). Sarah Amankwah is, I’m sorry to say, pants. Where we should get charisma, character and emotional agility we get broad, shouty gesture.

This, coupled with a wooden bench, no cushion and a dwindling supply of crisps, doth not a happy critic make. It’s also a waste of a largely talented ensemble.

The character actors are in great form — though special mention should go to John Leader and Sophie Russell, who hoover up a vasty number of minor parts with some wonderful expressions.

Shakespeare’s plays offer tremendous opportunity for invention. So robust that directors can really nail a vision on them: augment the elements they want; make them their own.

This — a pedestrian, staged reading with only the addition of big flags and some frankly pretty boring gender swaps — no longer cuts it.