The trio make up some 150 artists who have signed an open letter opposing the U.S. Supreme Court’s proposed plan to overturn Roe v. Wade, which would take away the constitutional right to abortion.

AceShowbiz –Phoebe Bridgers, Billie Eilish and Megan Thee Stallion have signed an open letter opposing the U.S. Supreme Court’s proposed abortion rights rollback. The trio make up some 150 artists joining forces to vocalize their support for women’s rights to choose if they wish to have a baby and have the “power to plan our own futures” in a full page ad.

“The Supreme Court is planning to overturn Roe v. Wade, taking away the constitutional right to abortion,” the ad, which ran in the New York Times on Friday, May 13, read. “Our power to plan our own futures and control our own bodies depends on our ability to access sexual and reproductive health care, including abortion.”

It continued, “We are Artists. Creators. Storytellers. We are the new generation stepping into our power. Now we are being robbed of our power. WE WILL NOT GO BACK – AND WE WILL NOT BACK DOWN.” 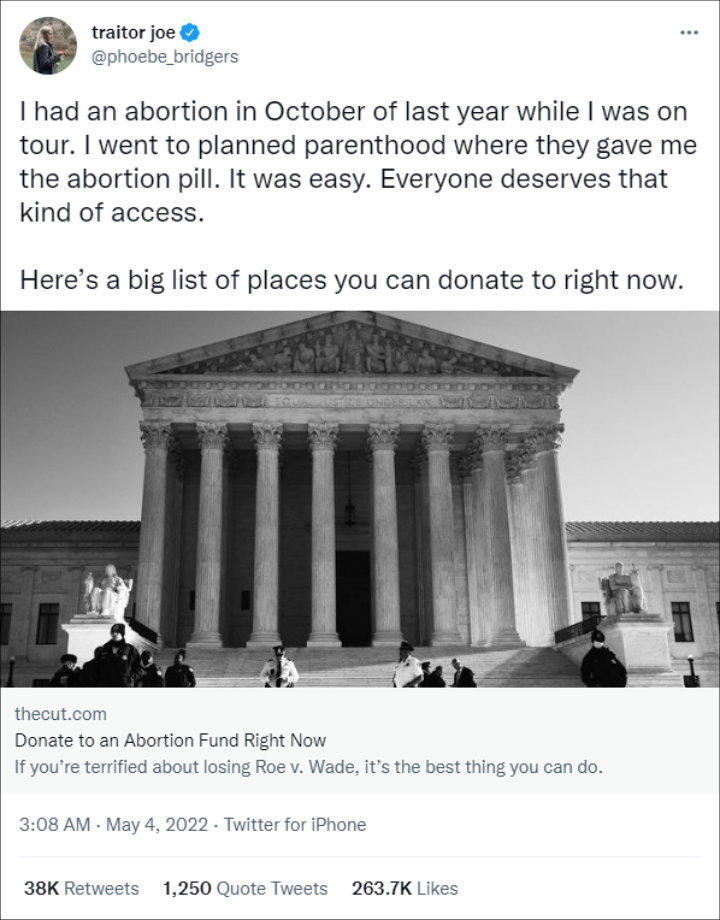 This message comes after a draft opinion was leaked to the press that argued that the 1973 ruling, which allowed women across America to get abortions, was “egregiously wrong from the start.” It also comes before the nationwide Bans Off Our Bodies Day of Action on Saturday, May 14, which is expected to bring rallies across the United States.

Along with signing the letter, Phoebe has pledged proceeds from her North American tour while go to an abortion charity. She said, “Tour starts in seven days. A dollar of each ticket will go to The Mariposa Fund, who work to provide abortions, specifically for undocumented people who already face huge systemic barrier when trying to obtain safe reproductive health services.”

In addition, the “Motion Sickness” singer shared her own experience of terminating an unwanted pregnancy. After the news broke, she revealed on Instagram, “I had an abortion in October of last year while I was on tour. I went to Planned Parenthood where they gave me the abortion pill. It was easy. Everyone deserves that kind of access.”

Joining 27-year-old Phoebe in voicing opposition are the likes of Demi Lovato, Olivia Rodrigo, Dylan O’Brien, Karlie Kloss, Hailey Bieber a.k.a Hailey Baldwin and Miley Cyrus among many others.