Stacey Dooley, 32, back her friend and fellow BBC star Steph McGovern, 37, on Twitter this week after the BBC Breakfast presenter revealed a bizarrely critical email she had received from a viewer. The complainer took umbrage with the way Middlesbrough-born Steph pronounced the word “here” and insisted she changed the way she said it. Kevin Clifton’s rumoured girlfriend Stacey shared a cutting response to the email after Steph uploaded it in view of her 363,000 Twitter followers, saying: “This email has really made me laugh. Two thoughts: 1) Can anyone say the word ‘here’ with one syllable” Try it. I’m curious.

“2) Despite what Trev thinks, how I say the word ‘here’ IS about my accent so he can one syllable off,” she quipped, adding the hashtag: “#syllablejunkie.”

The email read: “Hi Steph, please don’t get me wrong, I like you and think you do a very good job and I’m not being patronising there.

“Your accent doesn’t bother me apart from one word that you mangle. ‘Here.’ You say ‘heyah’.

“Sorry, but could you just please say here as one syllable,” he requested.

“You don’t have to put on a posh accent. Just say the word as it’s meant to be said. Thank you. Trevor.”

Retweeting Steph’s post in view of her own 292,000 followers, Stacey simply said: “Trev. Get a hobby hunni.”(sic) 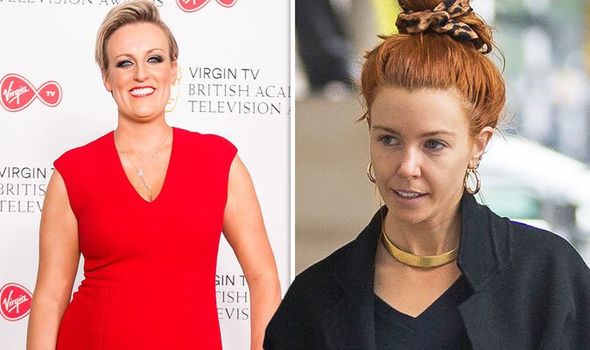 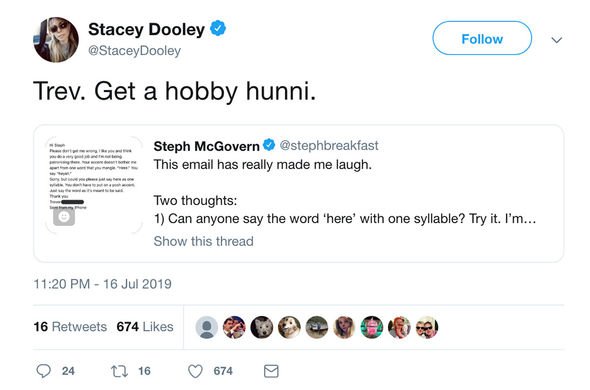 Many of Stacey’s fans flocked to the comments section to back her statement, with one saying: “Trev get a life, then get a hobby.”

“Trev needs to get a life,” another agreed, while a third wrote: “Never mind a hobby Trev… get a life. Steph’s accent is faberooni.”(sic)

The BBC Breakfast star, meanwhile, tweeted again after reading the many supportive messages she received from fans after unveiling Trevor’s email.

“I love all your responses to Trev the syllable snatcher!”she said.

“Thank you for making me laugh. 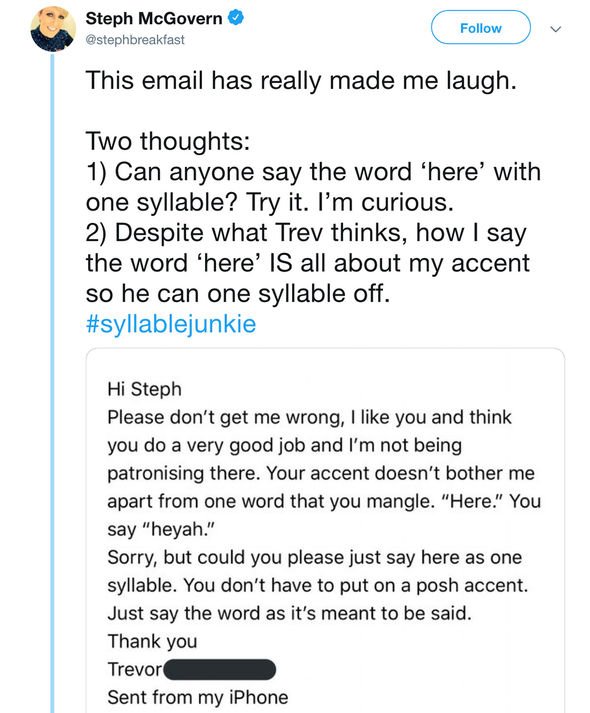 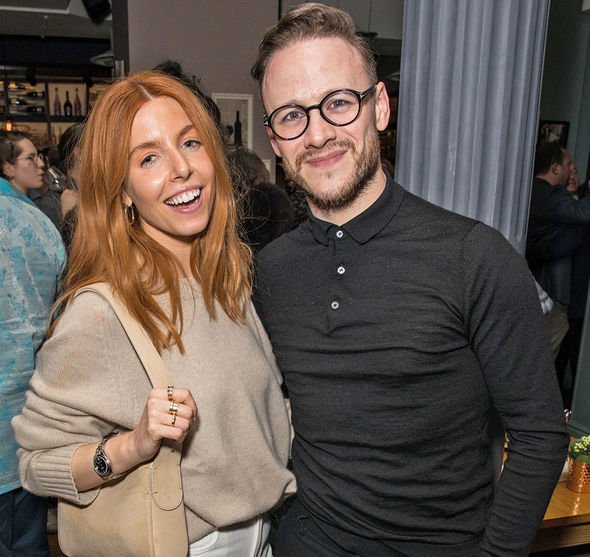 “Oh and also for teaching me what a diphthong is (clearly not swimwear worn by dinosaurs, which is what it sounded like to me),” she joked.

Earlier this month, Stacey Dooley responded to Steph McGovern’s pregnancy announcement after the presenter took to Twitter to share the happy news.

Confirming she and her girlfriend are expecting their first child, she said: “I see my news is out!

“Yep, I’m no longer with pot belly… I am now with child. #babyonboard.”

Stacey replied to the message with a series of heart emojis, at which point Steph wrote back with two kiss emojis.