Steph McGovern took to Twitter this morning after getting a bizarre message, in which she was branded the “other McGovern”. The former BBC Breakfast favourite questioned who was making her “the other one” as she spoke out in view of her 388,000 followers.

I want to know who is getting the ‘Dear McGovern’ emails?

The 37-year-old appeared to jokingly quip about “always being the other” in her latest update before returning to screens later this month.

Steph tweeted: “Just been sent an email which starts ‘Dear other McGovern’ — what? Who is making me the ‘other’ one then?

“My mam? My dad? I want to know who is getting the ‘Dear McGovern’ emails? I am raging. #alwaystheother.”

Her post quickly garnered hundreds of likes and responses, including one from BBC News reporter Sima Kotecha. 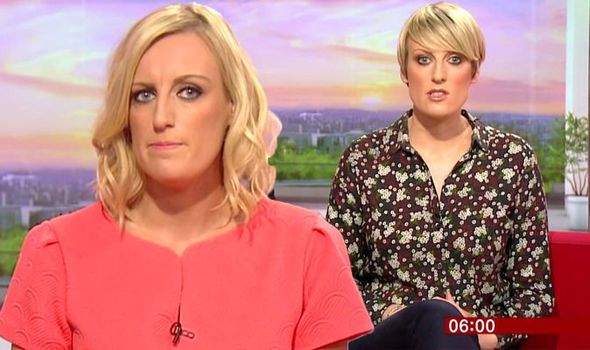 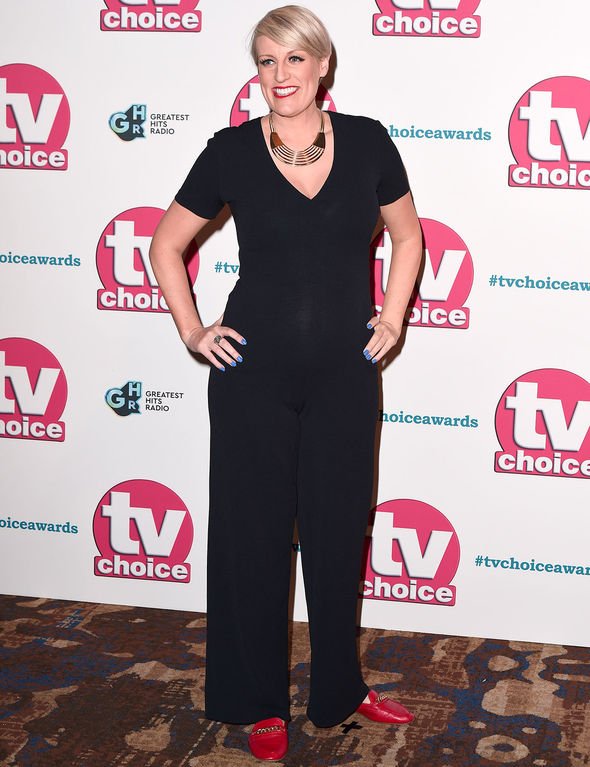 The 39-year-old replied: “Try being called Simon all the time Steph! Get so many emails saying ‘Dear Simon’.”

Steph admitted she made a “good point”, saying she had suffered similar on the small screen.

She continued: “I’ve been introduced on air as Steve before.” 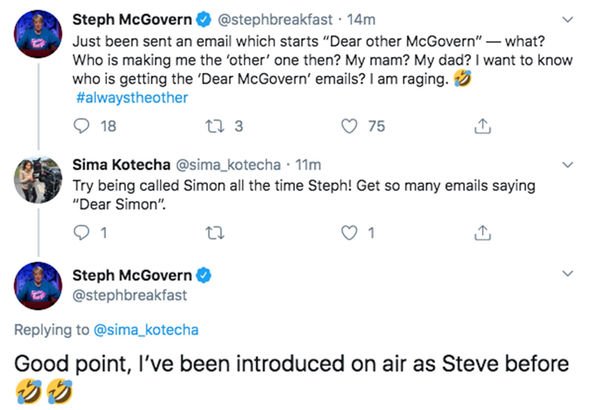 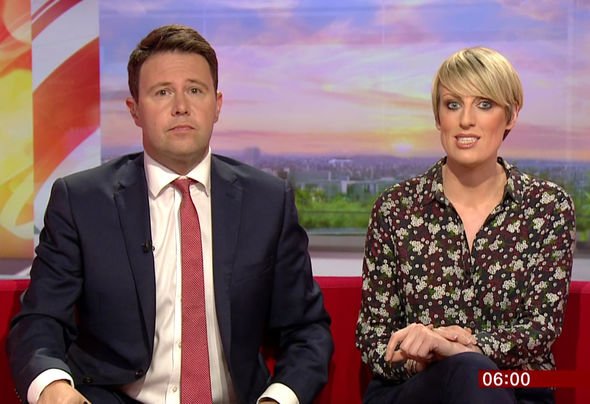 Giving in, Steph told her alongside a number of crying with laughter emojis: “Yep – you win.”

Meanwhile, the mother-of-one had been left amused after seeing a funny snap that has since gone a viral.

The original tweet was captioned: “Steve’s mate has taken what could already be the picture of the year… Know what it is?”

She shared it, writing: “First thing I saw on Twitter this morn and I can’t stop laughing. #sealingisbelieving,”(sic) in response to the snap of the seal.

It comes after Steph McGovern landed her own show on Channel 4, reportedly just seven months after her “close friend” took an executive position at the same station.

She announced her departure from BBC Breakfast in October last year before the birth of her first child.

The business correspondent has since revealed she will be fronting her new programme The Steph Show late this year.

Her colleague and friend Sinead Rocks, a former BBC director of education, was appointed Managing Director for Nations and Regions last April.

According to The Sun, the latter oversaw the setting up of new centres in Glasgow and Bristol and its national headquarters in Leeds — where The Steph Show will be made.

When her appointment was announced, Channel 4 said she would be “working with other executives and leaders across the business.”

However, Channel 4 has reportedly denied Sinead had any involvement in The Steph Show.

“All commissioning decisions are made by the Director of Programmes Ian Katz and his team. We undertook a rigorous pitch process for the new daily live show and the commission of The Steph Show from Expectation and Yorkshire-based Can-Can was based purely on merit.”

Of Monsters And Men Perform Cover Of Post Malone’s ‘Circles’

Dracula explained: Who made Dracula a vampire? How did he become a vampire?

Google Salary-Sharing Spreadsheets Are All The Rage. Here’s What You Should Know.

Of Monsters And Men Perform Cover Of Post Malone’s ‘Circles’

Dracula explained: Who made Dracula a vampire? How did he become a vampire?

Google Salary-Sharing Spreadsheets Are All The Rage. Here’s What You Should Know.