If you were wondering why Disney World and several names of rides were trending, we can just about guarantee the reason is dumber than anything you guessed.

It all started with an op-ed in the Orlando Sentinel by a lawyer named Jonathan VanBoskerck entitled, “I love Disney World, but wokeness is ruining the experience.”

Yep. It’s about that.

The self-proclaimed Christian and conservative Republican (shocker) explained that all the incremental changes removing the most racist and sexist elements of rides at the park are damaging his experience. He writes:

“The more Disney moves away from the values and vision of Walt Disney, the less Disney World means to me.”

Um… “the values and vision of Walt Disney”? We don’t know how to tell you this, guy, but Walt was widely rumored to be a Nazi sympathizer, so…

Anyway, that aside… Make no mistake, his complaints stem from what’s being taken away because of “politics”. He doesn’t just want the Disney of his youth — he never once mentions the change from Tower of Terror to Guardians Of The Galaxy — Mission: Breakout. No, he specifically is upset about changes that are being made out of empathy for marginalized groups who didn’t have as much of a voice in the past.

The article seems to have been spurred by the recent removal of statues of South American witch doctor character Trader Sam from the Jungle Cruise ride at both Walt Disney World and Disneyland, which happened earlier this month. VanBoskerck writes:

“Trader Sam is out because he might offend certain people. Every grown-up in the room realizes that Trader Sam is not a representation of reality and is meant as a funny and silly caricature.”

OK… no one thought Amos and Andy were “a representation of reality” either. It didn’t make it less racist. We can’t believe we have to explain why a “funny and silly caricature” of a member of another ethnic group is problematic, but here goes. The exaggerated features, as interpreted and designed by white observers, propagate stereotypes that crystallize an idea of “otherness” and serve to subconsciously dehumanize the race on the whole — especially when that statue is the only representation of that group found there. This sort of understanding is crucial when you’re talking about an attraction that will, sadly, be many children’s first experience of a South American person. 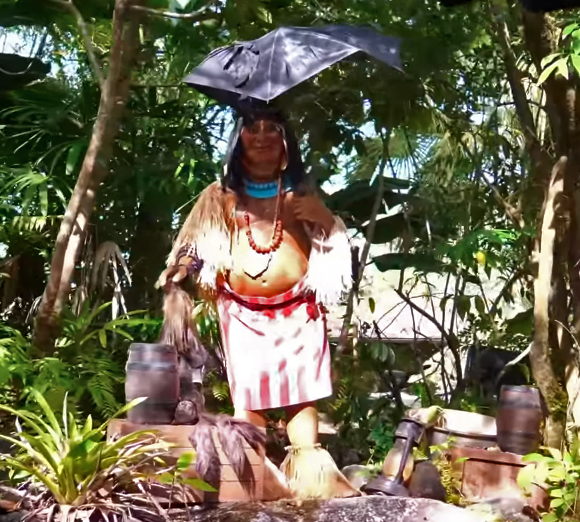 That’s the subconscious effect — the conscious effect is in actually offending “the adults in the room” who recognize the caricature as being harmful. Families of all races and creeds are supposed to be made to feel welcome at Disney — and it’s far from the “Happiest Place On Earth” when you walk in and feel like you’re being put on display and laughed at.

VanBoskerck says of the decision to remove Trader Sam:

Guy. How do you think all the people felt who had to be offended by it for years? Your preoccupation with “identity politics” is not their problem. You can ignore it because it was never about you. People of color can’t. The only price of them feeling included is that you have to think about it for one moment, and already it’s too high??

Basically the whole thing goes on like that. All the rides you think he’ll mention he mentions: Splash Mountain, Pirates of the Caribbean. All the hits.

All with the same refrain — making Disney rides less offensive

And then, faster than you can say “Shrimp Cereal Guy” someone learned the author is not just a “whining man-child” type of conservative but one of those “trying hard to actively do harm in the world” type conservatives.

Something tells us this guy’s visits to Disney World in the future are going to be ruined by people recognizing him and laughing. Or at least… every time a group of folks laughs near him he’ll have to wonder if that’s what’s happening… Hey, maybe he’ll discover empathy the hard way.