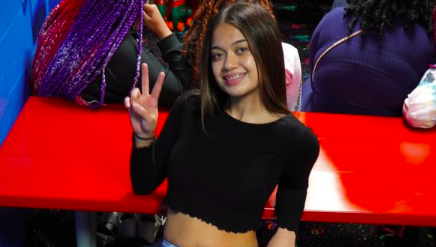 The teenager’s death was confirmed by her parents, who paid emotional tributes on social media.

Her father Raheem Alla, who also goes by Rodney Andry, shared a montage of pictures of his daughter on TikTok and wrote: ‘I just want to thank everyone for their love and support of my daughter. Unfortunately she is no longer with us and has gone to a better place.’

He set up a GoFundMe page for Dazharia’s funeral, and suggested that she took her own life.

‘On February 8th my daughter dazharia has left us early and have been call up to fly with the angels. She was my little best friend and I wasn’t prepared in no way, to bury my child. She was so happy, and would be so excited to see me when I come home from being on the road.

‘I only wish she would have spoken to me about her stress and the thoughts of suicide. We could work thru this. I only want to hold you again my little jelly bean. Now I come home and your no longer gonna be there waiting for me. I have to let you fly with the angels. Daddy love you.’

Dazharia’s mother Jennifer Schaffer wrote on Facebook: ‘I’m so heartbroken I really can’t believe you’re going I wish I was waiting on you to say it was a prank but its not i wishing could have died instead of u …rip my angel Everyone talks about our bad times but never talk about the good times #babygirldee.’

Coroner Shane Evans from the East Baton Rouge Parish Coroner’s Office confirmed that they responded to a suicide on Tuesday.

Fans of the influencer have shared their condolences and memories of Dazharia online.

Dazharia, also known as Dee or Bxbygirlldee, was a popular influencer on TikTok, and had 1.6 million followers on the platform.

The teenager shared a string of Instagram stories titled ‘last post’ the day before police responded to her death.

As well as doing TikTok viral challenges and playing pranks on her boyfriend, Dazharia posted videos giving an insight into her family life.

A recent video posted last month showed the influencer begging her mother to go to rehab, weeks after another video where she showed her mum videos of her when she had been taking drugs.

Dazharia also documented taking a DNA test with her father, after reconnecting with him as a teenager, with the test first coming back negative.

However, a second test confirmed that Alla was her biological father.