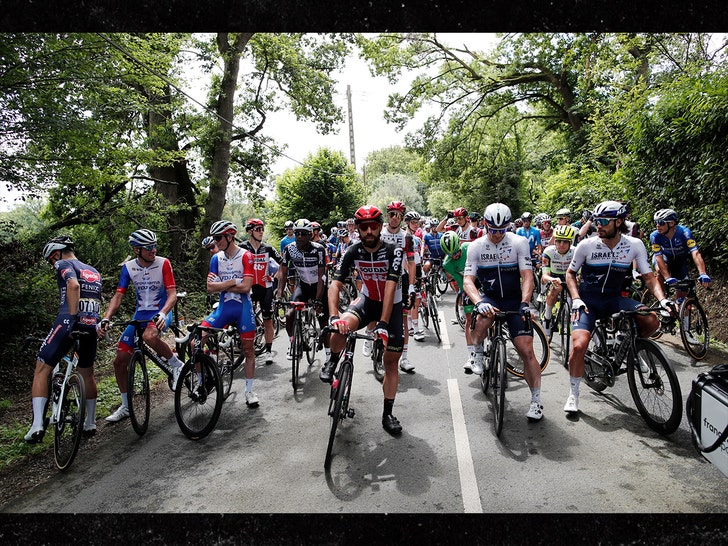 Wild scene from the Tour de France on Tuesday … when all the riders staged a 1-minute protest to demand safer racing conditions.

The event has been laden with gnarly crashes over the past 3 days … including a massive pileup caused by a spectator’s cardboard sign on Saturday.

Yet another crash went down during Stage 3 on Monday … and riders believe it could have been avoided if race organizers would have listened to their concerns regarding the curvy and narrow finale.

The riders decided to show just how pissed they are about the dangerous racing conditions with the strike … coming to a complete stop 1 kilometer into Stage 4 in hopes of bringing changes to the event.

The riders then resumed the race at a slow pace for the next 10 kilometers.

The Cyclistes Professionnels Associés released a statement in response to the crashes on Monday … saying the riders want their concerns to be taken seriously.

“Their frustration about foreseeable and preventable action is enormous,” the CPA said.

“The riders wish to stress their respect for their sponsors, their sports groups, the organizer, their international institution,” the statement added. “Supporters are very important to them — and this is why they will be riding today.”

“In return, the riders of the Tour de France ask for the same respect – respect for their safety.”

The riders are asking organizers to implement a “3-kilometer rule” … which means times would be taken 3 kilometers from the finish in case of future crashes or other issues similar to what went down on Monday.

Now, the question is … will the protest work?!?