Donald Trump and US First Lady Melania Trump greeted Prince Charles, Prince of Wales and his wife Britain’s Camilla, Duchess of Cornwall, ahead of a dinner Winfield House.

Melania wore a red dress with a cape detail, a design she has often favoured.

The former-model wore a Givenchy dress, which costs £5,610.

Made from wool-crepe, the gown has a bodice embroidered with beads.

The skirt featured a satin insert and pockets.

One said: “Note that this is Clare Waight Keller for Givenchy – who happens to have designed the Duchess of Sussex’s (Meghan Markle) wedding dress. This is a smooth choice for Melania, but it comes with a side dish of awkward after Trump’s ‘nasty’ comments.”

Another said: “Melania wore that same style dress last time she was in London – different color and little different design but basic style.”

“I guess the sleeve style on Melania’s dress are her “signature style” for England. She wore the same full-length, sliced sleeve on a yellow dress (with more of a Grecian bodice) when she was there last time visiting Winston Churchill’s birthplace!” another wrote. 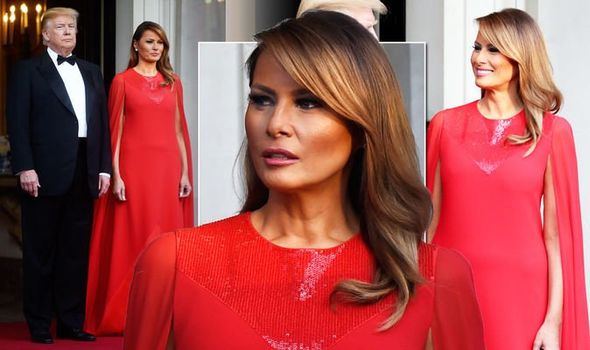 Camilla, on the other hand, wore white.

Melania’s wardrobe has been praised by fans in general over the course of this trip.

At last night’s state dinner Melania Trump wore a Dior dress with a see-through panel at the front.

The First Lady complemented her look with with an up-do and white gloves.

It was an hugely important event for the Trump as their first every state dinner with the British Royal Family. 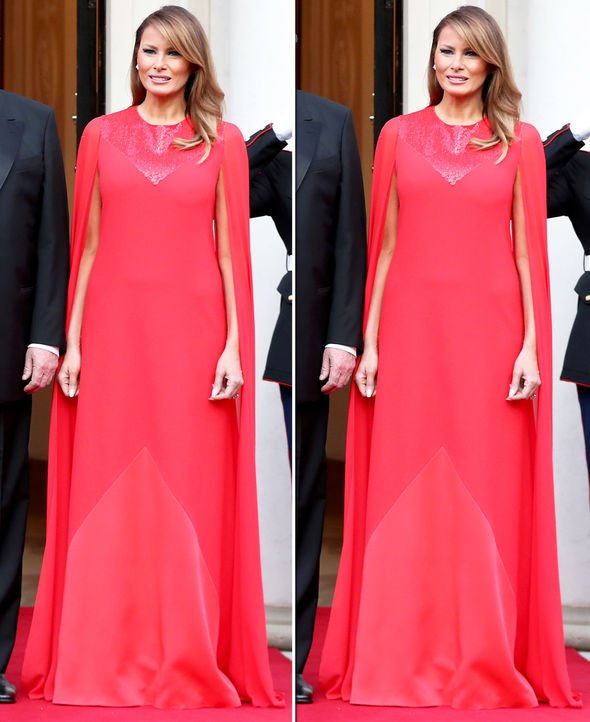 Most important royals were there, from the Queen and Prince Charles to Kate Middleton and Prince William.

Mum-of-one Melania wore the pale coat dress, which had a large A line skirt, belted at the waist with a black leather belt.

She has worn the item before, being photographed in it back in 2018 at a hurricane briefing in Washington.

Mum-of-one Melania can speak more languages than any other First Lady before her: English, French, German, Italian, Serbian and of course her mother tongue, Slovenian.

This also makes her the only First Lady whose first language is not English.

After Jacqueline Kennedy, Melania is the second First Lady who is a practising Catholic.

She met Pope Francis as part of a foreign tour with her husband and stepdaughter Ivanka last year.

Her skills aren’t confined to print, and she appeared in a commercial for Aflac, an American insurance company, in 2005.

Melania’s parents are Amalija Knavs and Viktor Knavs, and the couple live together in Washington.

She has one sister, Ines, who is reported to live in New York and work as an artist.

On May 7 2018, Melania launched her flagship campaign as First Lady, BE BEST, which The White House describes as “an awareness campaign focused entirely around the well-being of children”.

There are three main strands to the initiative: well-being, social media, and opioid abuse.