It’s a world of corsets, stays and chemises. Of weskits, bum rolls, breeches and hoop panniers. For actors, wearing period costume has long meant literally stepping into the past: lacing soft modern flesh into antique shapes and learning how to use the toilet without peeling off multiple layers.

“Bridgerton,” Shonda Rhimes’s racially diverse Netflix series set in 1813 England, has suddenly ignited new interest in Regency fashions. But a global community of hobbyists has been designing, making and wearing clothing from the 19th century and earlier for many years. Long a private obsession fueled by films like “The Leopard” and “Pride and Prejudice,” social media has widened the conversation, with fans of all ages and backgrounds worldwide now trading notes on how best to trim a sleeve or adjust a straw bonnet.

Pre-pandemic, they gathered in Los Angeles at Costume College, an annual conference, at Venice’s Carnival and the Fêtes Galantes at Versailles. Some lucky Europeans, like Filippa Trozelli, find themselves invited to wear their historical clothing to private parties at ancient local estates. 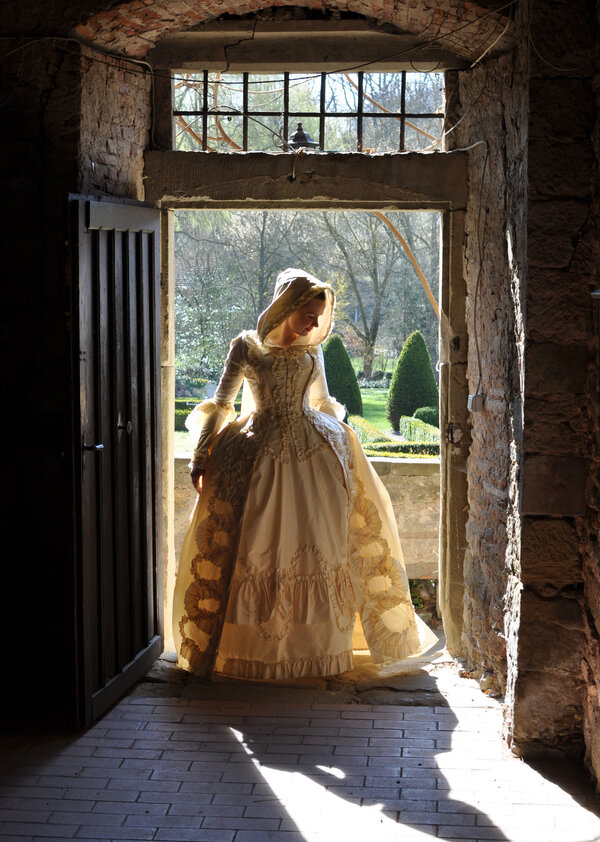 Ms. Trozelli, known on Instagram as @comtesse_comtesse, is a 29-year-old antique jewelry appraiser in Stockholm whose family home is filled with ancestral portraits. At 25, after graduating with a degree in art history and cultural studies, she was hit by a car and spent 18 months recovering. With too many empty hours, she started watching YouTube tutorials on how to make historical dress, ordering pattern books and information.

As she gained proficiency, she took a period dancing class and started attending monthly parties with others in costume. “You can’t really understand history until you’ve worn it,” she said. “You get a whole different understanding.”

Ms. Trozelli is a “huge admirer” of fellow obsessive Merja Palkivaara, a 38-year-old car mechanic in Sipoo, Finland, whose meticulous creations have earned her 51,000 followers. “She’s the best! She amazes me! That woman is a genius!” said Luca Costigliolo, 43, who lives in Genoa and designs, wears and teaches historical costuming at the School of Historical Dress in London. Ms. Palkivaara began making period clothing 15 years ago, inspired by a red satin gown in the film “Moulin Rouge.”

“The whole sewing thing is out of the norm for me,” she said. “I grew up doing motor sports and fixing cars, but I had a fascination with corsets and lingerie and was collecting them. I love all sorts of feminine clothes, so it was fun to find a way to put it into action.” Today she’s made 20 to 30 period garments and even crafts her own historically authentic boots.

Ms. Palkivaara praises Mr. Costigliolo as “one of my personal heroes” for his understanding of period silhouettes; experts agree the most lavish styles are ruined by modern undergarments, not the corsets and stays that create historically correct body shapes. Mr. Costigliolo began making and wearing corsets when he was 11, and wore them to art school in Genoa under his Levis when he was 16. “I was obsessed with Scarlett O’Hara and her 17-inch waist,” he said. “I had an Anna Karenina obsession.”

With a supportive family, and living a raffish port city that embraces eccentricity, he started wearing more and more period clothing in public, like a reconstruction of Scarlett O’Hara’s mourning dress on the train to Venice for Carnival. The internet has made his early obsession easier to share. “Today you can explain things more intimately,” he said. “I did it a bit too early.”

Everyone has a different reason for enjoying historical costume, Mr. Costigliolo said. “For me, I needed something to give me strength,” he said, to come out as gay. “For women, it might be having a body that just doesn’t look good in modern clothes, or you’re in love with a style and it’s purely aesthetic. It’s also a mental journey, where you understand an era. It adds a bit of poetry to your life.”

Many men who wear period clothing do so to enjoy group re-enactments and activities, whether of the U.S. Civil War or Tudor times in Britain. Mitchell Kramer, 52, an actor who lives in a 200-year-old house in Philadelphia, has morphed into Benjamin Franklin for 15 years, whether addressing a conference or publicly reading the Declaration of Independence at Valley Forge. His learning curve “was endless,” he said. “I just read everything there was to read” — even studying an original suit Franklin wore. But wearing breeches and uncomfortable buckled shoes is work to Mr. Kramer, not play. “I don’t put on the costume unless I’m paid for it,” he said.

Some who want to learn the crucial sewing and construction skills for such activities come to the eight-year-old School of Historical Dress in London, where they can take small-group short courses led by its director, Jenny Tiramani, winner of a 2013 Tony and former director of theater design at Shakespeare’s Globe Theater. Sales of her pattern books have tripled since the pandemic, she said.

Hilary Specht Coffey, who has worked at Period Corsets in Seattle for 22 years (and bought the company in 2012), said business has boomed since the release of “Bridgerton,” with customers choosing her $100 kits instead of her corsets, which start at $200 and can cost thousands. She also sells the underpinnings: a bum roll at $56, a pocket hoop pannier for $368 and a drum farthingale for $434.

Pandemic isolation, the grim toll of widespread infection and death and months spent lounging in sweatpants can make slipping into the distant past via a robe à la française, swathed in 10 yards of silk, even more appealing. “It’s completely transporting,” Ms. Coffey said. “You take on a persona. You become something different, something better. The gritty reality of everyday is wearing. Once dressed, you have your manners again.”

Elegance aside, many enthusiasts of historical dress are troubled that so many in their number are white, female and apparently affluent. “It’s something I’ve been talking about for years that’s uncomfortable,” Ms. Palkivaara said. “I’ve never been someone who upholds traditional values. I hate to think this will look like a white elite group. I hope ‘Bridgerton’ will make this more approachable.”

“The community is very white and has been. It’s a sticky issue the community has been grappling with, with more calls for diversity,” Ms. Dowdell said.

“It’s a real issue,” said Taylor Shelby, 38, a reproduction jewelry maker in Washington, D.C., who also makes and wears period clothing. “There’s some ickiness about showing wealth and the fetishization of early America. We want more people of color to join just for the joy of it. There’s a lot more we can do.”

For Panni Malekzadeh, 35, an artist and Iranian-American living in Los Angeles, wearing elaborate early European clothing is a political statement. “Why can’t I wear those big beautiful gowns that white Europeans are allowed to wear?” she said. “I often feel like an outcast. I’m the only brown girl at a party.”

“The past is fun,” Ms. Dowdell said, “but we wouldn’t want to live there.”