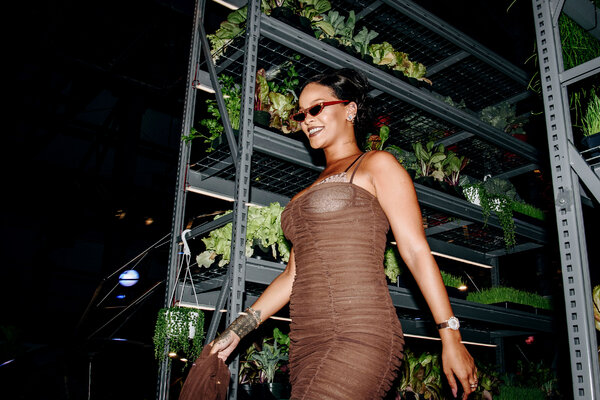 Is this the end of the celebrity-high-fashion-designer experiment? There is, it turns out, something even Rihanna cannot do: sell high fashion clothes during a pandemic.

LVMH Moët Hennessy Louis Vuitton, the French luxury group, announced the Fenty fashion house to great fanfare in 2019. But today, they revealed that, with Rihanna, they had “jointly made the decision to put on hold the ready-to-wear activity, based in Europe, pending better conditions.”

Translated, that means the luxury fashion arm of the Fenty empire, which includes the lingerie line Savage X Fenty and Fenty cosmetics and skin care, will no longer produce any collections, even though it is not officially closed, and Rihanna remains a part of LVMH.

Discussions are currently underway with the brand’s employees about their future, though Bastien Renard, the label’s managing director, is remaining in position. The news was first reported by Women’s Wear Daily.

Although it comes on the heels of a successful $115 million fund-raising round for Savage X Fenty by L Catterton, the private equity firm connected to LVMH, the suspension of the Fenty ready-to-wear is a rare failure for the world’s largest luxury group, which also owns Louis Vuitton, Dior, and Celine. It is also the rare misstep for one of the world’s most effective celebrity polymaths: a reflection of both the tepid market reaction to the Fenty collections, as well as the wider ongoing impact of the pandemic on the luxury sector.

And it is a reminder that just because someone has an enormous cultural following and no-holds-barred taste, it does not mean they will make great, original clothes.

Only the second luxury fashion maison LVMH ever attempted to build from scratch (the first was Christian Lacroix, which LVMH opened in 1987 and sold in 2005), Fenty was initially presented as the group’s foray into the future: a new brand, run by a Black woman with great style and popular influence but no formal old-fashioned design training, that would eschew the calcified system of runway shows for regular drops, and focus on digital direct-to-consumer sales and communication.

What could go wrong?

Starting a new luxury fashion house from scratch is enormously expensive for any investor, and usually takes time. But 2020 was the worst year for the luxury sector in history. While LVMH, the largest luxury group by sales, reported a sales rebound in recent months, largely fueled by Chinese consumers, lockdowns continue to cause ongoing disruption and damped group profit. LVMH said last month that their profit in 2020 was €4.7 billion, declining by roughly a third from 2019.

And unlike some other LVMH brands that have proved resilient during the downturn, like Louis Vuitton and Dior, the bold experiment that was the Fenty clothing line struggled to find its footing, something Jean-Jacques Guiony, LVMH chief financial officer, alluded to last October while on a news call reporting the group’s third quarter 2020 results.

“On Fenty fashion, we are obviously still in a launching phase and we have to figure out exactly what is the right offer. It’s not something that is easy. We were starting entirely from scratch,” he said. “Obviously, we have the great help from Rihanna on this, but I would say it’s still a work in progress when it comes to really defining what the offer will be.”

Indeed, “the offer” was unclear from the start. At the house’s founding, a statement from LVMH read that the new brand would be “centered on Rihanna, developed by her,” and would take “shape with her vision.”

But while Rihanna built her profile in part on her own strategic and adventurous embrace of high fashion — receiving the fashion icon” award from the Council of Fashion Designers of America in 2014 in a see-through crystal-spangled dress, thong, and white fur boa — she often seemed better at choosing statement-making looks for herself than creating new ones for her followers. Generally veering between oversize and highly body-con, with a streetwear bent, the clothes seemed more derivative than groundbreaking.

They may also have been more expensive than many of Rihanna’s fans might have expected (albeit less so than the usual LVMH offering): $940 for a padded denim jacket; $810 for a corseted shirtdress.

Meanwhile, Savage X Fenty grabbed headlines with song-’n-dance-’n-celebrity-filled lingerie extravaganzas filmed lived and then streamed on Amazon, positioning itself as the empowered, inclusive answer to Victoria’s Secret in a post-#MeToo world.

This timeout the Fenty clothing brand has been granted could allow it to reposition itself and refine its offering, seizing a better moment to return — perhaps after the pent-up party-desires of the pandemic are unleashed. There is a reason they have not closed it entirely.

On Wednesday, as news about the LVMH partnership spread, Savage X Fenty issued a statement outlining details of the new funding round, in which Jay-Z is an investor through his firm Marcy Venture Partners. In the last year the brand has experienced “explosive revenue growth of over 200 percent,” the statement read, and the “heavily subscribed” round would fuel investment into customer acquisition and an expansion into retail.

“The brand strikes a unique balance between affordability, fashion, and comfort, stands deeply for inclusivity and diversity, and has differentiated itself by building an extraordinary level of affinity and unmatched customer loyalty,” said Jonathan Owsley, comanaging partner of L Catterton’s growth fund.

There was no mention of the Fenty clothing line, nor the suspended experiment with LVMH.