She takes after her mama! Leni Klum looks just like mom Heidi Klum as they rocked matching silver dresses for the Dolce & Gabbana fashion show.

The Klum girls are the epitome of glam! Heidi Klum, 48, and daughter Leni, 17, attended the lavish Dolce & Gabbana fashion show in Venice and rocked matching looks. Heidi wowed in a silver sequined gown, while Leni rocked the exact same style just in a mini dress version.

Leni posted photos from the event and wrote, “Matching with mommy.” Leni and Heidi also wore silver sequined heels, and Leni had a silver sequined clutch as well. The mom and daughter duo looked like twins sitting on a set of steps together.

Heidi and Leni were spotted on a boat together before the A-list Dolce & Gabbana show. Leni looked adorable in a rose print silk ensemble that included a pajama-style button-down top and matching bottoms. Heidi wowed in a patchwork-style jacket with multi-colored brocade patterns.

Leni is Heidi’s oldest child from her relationship with Formula One team owner Flavio Briatore. The emerging supermodel was later adopted by Seal, who was Heidi’s husband from 2005 to 2014. Heidi has three other children from her marriage with Seal.

Heidi has been right by her daughter’s side as Leni navigates her burgeoning modeling career. “I’ve been helping her with deals and she has so many things in the pipeline,” Heidi told PEOPLE. “It’s really exciting. She’s doing the things I was always dreaming to do!” 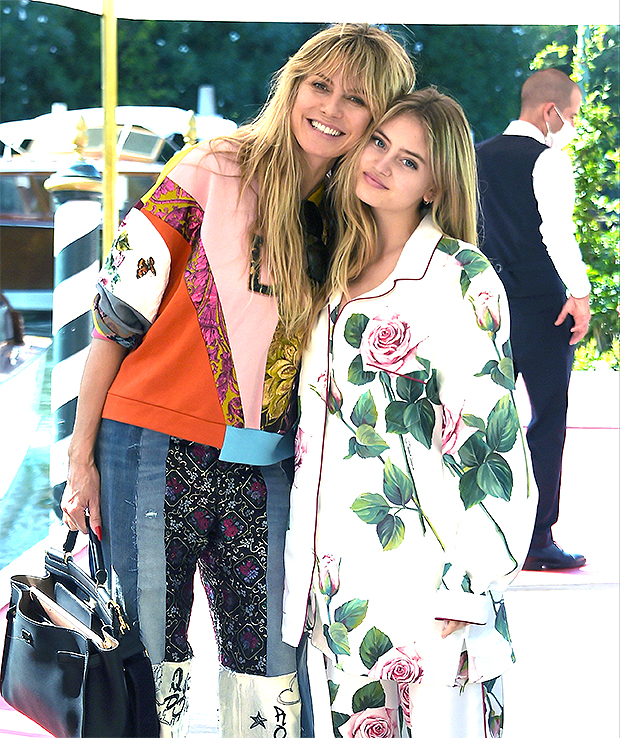 She also shared her best advice for her daughter, “I said to her, at the end of the day you have to be happy with yourself. And don’t do anything you don’t want to do. It’s okay to say no. You don’t always have to please people. But I’m always with Leni. And she has a very good head on her shoulders.”