“I want to flip the question of what it means to be a man,” Billy Porter said. “This question of masculinity, this sort of microscope of heteronormative masculinity that we are very often held up to, especially as leading men, needs to be shattered. You know, it’s toxic and I’m over it and I’ve lived it and I’m not doing it anymore.”

Pinned around Mr. Porter’s body was a hand-sewn Elizabethan gown made from the velvety pomegranate red curtain that had once separated him from the audience for the entirety of his Tony-winning “Kinky Boots” run: roughly 1,150 shows.

In a dressing room on the Upper West Side, he was preparing, with Sam Ratelle (his stylist), for his first time as a presenter at the Tony Awards, on June 9. This comes after a run of red carpet entrances, including the Oscars and the Met Gala, that have transformed the genre from bland marketing moment for brands to opportunity for high personal statement making.

Mr. Porter arrived at the Met Gala in a 24-karat-gold headpiece, born aloft on a litter carried by six shirtless men in gold pants. For the Academy Awards he wore a perfectly tailored tuxedo gown. 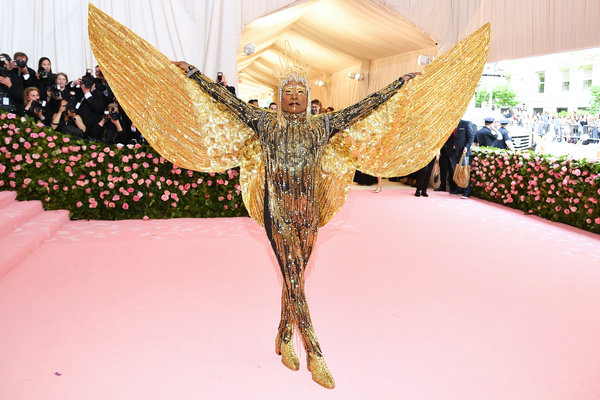 “Can we talk about the shoes?” he asked Mr. Ratelle. They’ve been working together for a little over a year, and their conversations usually go something like this.

“We can always talk about the shoes,” Mr. Ratelle said.

Mr. Porter looked at the sketches. “These grandma shoes, I can’t,” he said, of some chunky heels. What he could: a pair of tan six-inch platform spikes, as high as the stakes for Mr. Porter, for whom expectations are now exceedingly grand. Enter the curtain.

When “Kinky Boots” closed, in April 2018, the handbag company Scenery Bags, which makes handmade accessories out of retired theater material, bought the fall of red velvet and contacted Mr. Ratelle to ask if Mr. Porter was interested in having it made into a purse. Mr. Ratelle had another idea.

Mr. Porter agreed. “Sometimes it’s just a train and some pants,” he said.

With the shoes on and the gown secured around cotton organza fit pants, Mr. Porter began to walk. There are people who say dance like no one’s looking; Mr. Porter walks like everyone’s looking. He threw the skirt around like a weapon.

When Mr. Porter was a student at Carnegie Mellon in the late 1980s and early ’90s, he took a costume behavior and etiquette class. The course detailed how to work all of the stage garments from other eras, pieces like petticoats or bustles or trains or fans or parasols.

“For men, it was all about coats with tails and canes and top hats,” he said. He paid a lot of attention to the women’s clothes, he said, “because again, it was way more interesting.”

Mr. Porter spied a slip-on pair of clear vinyl heels, also very high, but open toed. “These might be better. She can get a little pedicure too,” he said, trying them on. Then he observed, “Putting on the dress, playing Lola, made me feel the most masculine and grounded that I’ve ever felt in my life because I was finally not apologizing for anything.”

Mr. Guadarrama described his plans for the Tonys curtain gown, which involved thousands of hand-embroidered flower clusters, a corseted bodice and a skirt that expands horizontally like an upside-down bloom, opening to a pair of cigarette pants (also made from the curtain).

“This is exactly what I was looking for — pants but drama,” Mr. Porter said. Mr. Guadarrama asked Mr. Porter if they could include an embroidered uterus, because the dress is inspired by “empowering women’s reproductive rights.” Mr. Porter nodded.

“I love the Tonys,” he said. “It was the first award show that I really paid attention to. I saw Jennifer Holliday sing, ‘And I’m Telling You’ from ‘Dreamgirls’ and realized I could do this for a living. You know, it’s like, ‘Oh wait, there are black people that do this? And they sing like I’d sing in church? I want to do that.’”

There are those who only know Mr. Porter as Pray Tell from the FX series “Pose,” which begins again on Tuesday, but he started his career as a singer in R&B 30 years ago. Then, Mr. Porter’s music videos featured him swooning over and serenading a Whitney Houston look-alike.

“It just didn’t have anything to do with me,” he said. At one point, a record executive told Mr. Porter not to speak during an appearance on “The Rosie O’Donnell Show” for fear that he would seem too gay, too black.

“I don’t have to pretend anymore,” Mr. Porter said. “When we walked into acting school, the first thing they’d say is, ‘You have got to be honest. You have got to be true, you’ve got to be authentic.’ And then they turned to the gay boys in the room and it’s like, ‘Except y’all, you faggots have to fix yourself.’”

Mr. Porter thought Broadway might prove different from the music industry. But the roles didn’t quite fit. “I grew up in Pittsburgh, Pennsylvania,” he said. “August Wilson wrote about the neighborhoods I grew up in and there’s not one person in his 10-play cycle that is a gay black male.” Eventually, Mr. Porter saw “Angels in America” and finally connected to a character onstage.

“I was doing ‘Grease’ and thinking, ‘Oh my God. no one will ever see me like that,’” Mr. Porter said. “I was wearing 14 inches of red rubber hair when I did ‘Beauty School Dropout.’” The roles he was playing, he said, felt grotesque and exaggerated, and they were dehumanizing.

He moved to Los Angeles and enrolled in a screenwriting program at U.C.L.A. “But there were a few years when I was depressed all the time,” he continued. “That was my inappropriate Abercrombie & Fitch phase. And my cargo pants phase.” He put his stuff in storage; he couch-surfed; he wrote; he directed; he did what he could.

Then, in 2010, at the age of 41, he was cast as Belize in a Broadway revival of “Angels in America.” After that, “Kinky Boots” came along, followed by “Pose.” “Now I’m being hired for exactly who I am,” Mr. Porter said. “I don’t have to pretend anymore.” At some point he decided he didn’t want pretend on the red carpet either. He was tired of wearing what he calls a “literal straight jacket.”

“I didn’t even know I had a desire to wear things that were feminine,” he said. “It was just about wearing something that was different.” Mr. Porter also realized he was missing out on a huge revenue stream in the form of fashion advertising, endorsements and marketing moments. He was buying all his clothes, which cost “lots of money — enough money to where my business managers said, ‘You have to stop spending money on clothes.’”

And so he decided to make himself a brand. He uses every article and accessory to articulate his mission. Last week at an event he carried a These Pink Lips bag painted in big block words, “Pay Me!,” along with a profanity.

As his red velvet curtain dress was zipped into a hanging bag for safe transport back downtown to Celestino’s showroom, Mr. Porter changed into his walking-around clothes: a long black blouse, Prada shoes and straw porkpie hat. His husband had been telling him that he had to start wearing baseball caps to avoid being recognized, but he doesn’t have any.

“I won’t wear a baseball cap,” Mr. Porter said. “I still dress up to fly. My aunt Dorothy always says, ‘Dress for the job you want, not the one you have.’”

And what job does he want?

“I want to run all of it,” Mr. Porter said. “For now, this is the steppingstone to hosting the Tonys’.”

Then he wants an empire. “I’ve sat around and waited for other people to tell me yes,” he said. “I want to be the yes person.”