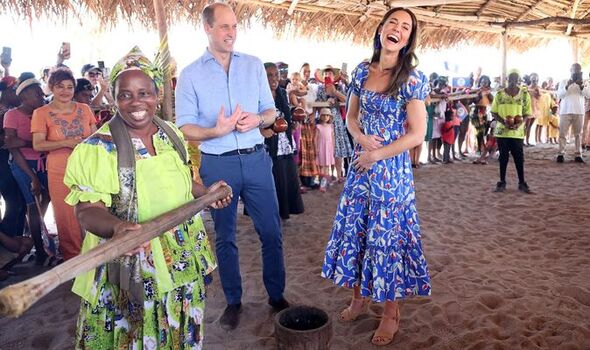 The Duchess of Cambridge and husband Prince William are touring in the Caribbean this week. But eagle-eyed followers of fashion may have noticed she stepped a foot out of line by ignoring royal protocol. Kate delighted the people of Belize by wearing a floral Tory Burch dress which was red, white and blue, the colours of the country’s flag.

But she broke one of the dress-code rules of the monarchy by wearing open toed footwear, which is considered too informal for royal engagements and official visits.

Kate’s shoes also had wedged heel – a style the Queen dislikes and has directed working members of the royal family away from wearing.

She says: “There’s no actual rule book written down, but, like in any family there are unspoken rules.

“When people like Kate or Meghan come into the royal family what usually happens is they are taken to one side, usually by someone like a chamber maid, and told what is acceptable and expected.

“The etiquette when it comes to open toed shoes and sandals is that they are too casual.

“Kate tends to break this rule if she attends a Hollywood or red-carpet event, but usually with a long dress so it’s not too noticeable.

“I also think that Kate has got the thing about her that Diana had, which is to think about her surrounding environment and dress appropriately for that.

“Heels would not have been practical or appropriate to meet the people in Belize or to walk on sand.”

It’s not the first time Kate’s ignored the footwear rules.

She also opted for wedges at the 2012 Olympic Games relay and in 2019 on a visit to children’s hospice The Nook Centre in Norfolk to plant a sensory garden.

But with temperatures on the Central American island averaging 28 degrees Celsius in March, this may have been for comfort, more than style.

Other rules include only wearing natural-looking hair and make-up, covering shoulders, skirts no shorter than knee-length and never taking off a coat in public because it is ‘unladylike’.

Boys under the age of eight must wear shorts, not trousers, which are reserved for ‘men’.

They also wear military attire on special occasions and days like Remembrance Day.

William, 39, and Kate are on a tour of the Caribbean to mark the Queen’s Platinum Jubilee this year.

Kate’s footwear faux pas happened on day two of their trip to Belize, where they visited the village of Hopkins and were treated to a ‘welcome’ performance.

They spent the day being served food by a local celebrity chef, and dancing with the Garifuna community in Hopkins, which has a population of 1,000 and is regularly voted the ‘friendliest’ village in Belize.

They later visited a small group of local conservationists to learn more about the country’s unique marine habitat, as it has the world’s second largest reef.

The couple then moved onto Jamaica to continue their Caribbean travels, which will also see them visit the Bahamas for a ‘junkanoo parade’, a street event celebrating Bahamian culture.