The Woolmark Prize has a legendary status in fashion for a reason. Karl Lagerfeld—at the age of 21-years-old—was its first winner in 1954. During the jury process of that very prize, Christian Dior also hired a young Yves Saint Laurent to work at his label. Consider it an auspicious start. Lagerfeld went on to work for Pierre Balmain, who was also involved in the first selection. Since then, the Woolmark Prize has recognized the talents of designers from Givenchy to Ralph Lauren and recently, young designers centering sustainable design.

This week, the 2021 International Woolmark Prize finalists were announced. The 2021 Woolmark Prize has a theme of sustainability and supply chain transparency tied to innovation—designers will create collections to show this Spring using Australian Merino Wool.

The finalists include Charaf Tajer of Casablanca, known for his sensuous menswear rooted in his Moroccan and Parisian identities; the UK’s Matty Bovan, whose brilliant upcycling combines craft and dystopian vision; and Bethany Williams, who makes a powerful statement not just in her deeply realized ready-to-wear but through her production, which engages with alternate systems and works directly to support vulnerable neighbors in the London community. Thebe Magugu, based in South Africa, explores the intimacies and beauty of his home and identity through very forward womenswear and local production. Marie-Eve Lecavalier, the French-Canadian designer behind Lecavalier, has a dreamy transporting vision that is innovating conceptually, as well as through garment construction and environmental consciousness. She is working towards a zero-waste business.

The sixth designer is Kenneth Ize, who works with beautiful, richly intricate tradition of aso oke in Lagos, Nigeria. He recently developed and opened a factory supporting 30 weavers, and presented a Spring/Summer 2021 collection filled with rainbow colors, elegant separates at ease in queerness, and garments which call attention to the intricacy and modernity of the weaving.

We caught up with Ize, who was in the market in Lagos on the phone to talk about his plans for the Woolmark Prize, what it is like designing in this moment, and what is next.

Let’s first talk about the Woolmark Prize. Tell me a little bit about your thoughts on the theme, Less is More, and your reactions.

You know the theme is something that we’re normally used to, we’re just not used to it on an educational level. So, I’m so happy that Woolmark is actually doing this theme, and it’s just going to be for the better to also create more awareness in what’s happening now and where we need to create change. It’s very important also for us to think about the future. Sustainability is something that is very important for us to think about. Woolmark has so many assets that we as young designers can actually lean into…I’m happy to be a part of it.

What have you been up to the past few months and what are you looking at now? I know you’ve been doing a lot with your own production, opening a factory with all your weavers, and creating this most recent collection.

Like you’ve said, I’ve been working on production because [with] the Woolmark Prize we need to work on the special wool fabric. I haven’t really done so much with wool before. This will be the first time I’ve woven with it. I also need to think about how is this fabric going to adapt to where I’m from here in Africa? How do I want to make use of it? Those are some things I’m thinking about. So I’m really just researching the things I could do: How I want to do it? What message will I give? Do I also want to keep going with the old message from last season? Do I really want to stretch it? I’m just at the point of figuring it out and I think that’s interesting. For me, I want to create something very special. I want to push myself. I’m also traveling again. I’m going back to Europe to see the production…I’m happy to have these busy moments. I feel occupied and I like it. 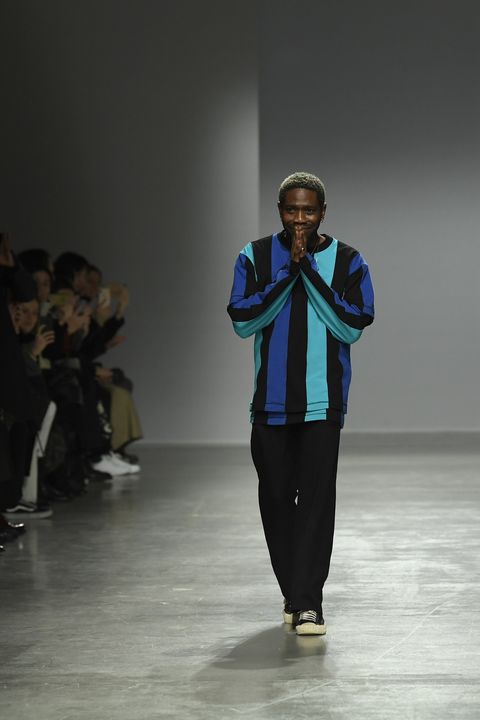 And a lot of things happened in Lagos like two weeks ago, three weeks ago. And that, for example, just me as a youth, as a young person— that is just what pushes me to do more. And that’s exactly what I was talking about with queerness. So, for me going back and doing something very new when I just worked on the last season—I’m just trying to do whatever I can.

Are there issues you want to explore, or to be present in the conversation as you start to create this new project?

I’m creating these new products. And I’m still experimenting on this product, so right now, it feels like, working on the things that I want to with the wool, I’m more thinking of how to actually attach the wool into what I’m doing, you know, just to play around with that.

I’m curious how things have things have been going in the lockdown, and what the experience has been and if that’s had any impact on how you think about design or on the production?

Right now, I’m back into a city that has just gone through a lot in terms of youthful protest, in terms of ending police brutality and just ending the SARS. And just listen to the youth. We have almost 80 million youth in this country. There are loads of youth, and we all have different issues. We all have a different relationship with what the government has done in terms of corruption. Being a queer person, you’re not allowed to even have nail polish. You’re not allowed to be yourself. So, anything that I’m going to be doing is going is just be something that is very, very empowering and also be something that governments—it’s going to be from a human rights perspective and to get the government to listen through my work. So, I’m going to make the work speak for me with what I’m trying to do. It’s actually very political. I’m going to take some subjects and at the end of the day, again, all in all, I want to make beautiful clothes. I want to make people feel a certain way.

The work that I’m trying to do speaks to freedom. It speaks justice. And it also speaks to intelligence in terms of like, how can we not see what’s happening? For me, as a young fashion designer in this country, for me to have just like a normal six-hour straight up proper work in my studio is almost impossible because if I have to walk down to my studio it might take me maybe about four hours to go there. And then I lose my day. And just for example, what you experienced now [with not being able to get connection and hear each other on the phone], and these things are also part of the reasons why we say enough is enough. I’m in city where I produce my work, and it’s only going to be fair and honest of me to keep thinking about the state that I am now with my work.

Obviously now is an extremely challenging time in between SARS and human rights questions and the pandemic. But I’m also curious if there’s anything you’re also feeling really inspired by?

I’m really inspired by— honestly the simplest thing I can think about right now is really, really honestly about people. The moment people started coming together and being as one, even the elitists, no one cares who you are—that in Lagos has never happened before. And to see people love and having that spirit— that’s what I feel now. That’s the energy to ride in. So positive things that happened. I’m really inspired by how people are in these times. I’m so interested in just humans. That’s where I feel my space in. And I’m also inspired by news a lot because I feel like the energy is really, really amazing and everyone is here to push boundaries.

This article has been edited and condensed.