A MOTHER has revealed how she "took her life back with both hands" and revamped her downstairs bathroom after separating from her husband.

Nicola Bullock, 44, from Bracknell, turned her "drab and dreary" bathroom into a quirky Alice in Wonderland themed room with a twist following her marriage breakdown.

The mother and customer services employee shared her DIY transformation project on Facebook and claimed her "ex husband refused to do any decorating."

Posting amazing before-and-after photos, Nicola added: "He left and this is my first ever room revamp."

The post instantly raked up nearly 9,000 likes and over a thousand comments from strangers praising Nicola’s bravery as well as her impressive DIY skills.

Nicola said her former marital situation at home prevented her from decorating the house so the day she separated from her husband, she started her "DIY mission". 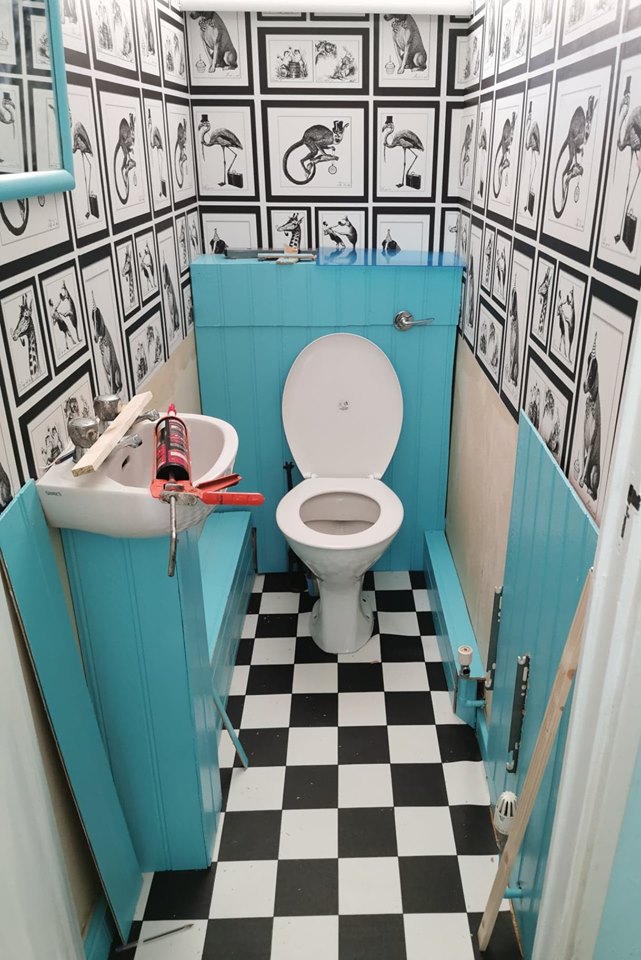 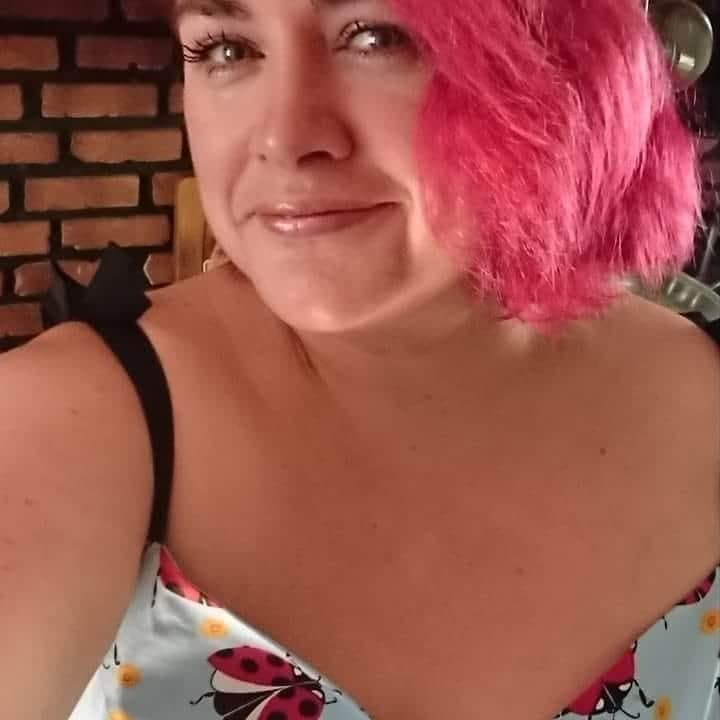 The mother said not only has she "washed that man out of her hair", she has "decorated him out of her house".

She said: "The day I separated from my husband was the day I took back my life with both hands and started my DIY mission on my house.

"I just wanted to show others even if you have never done anything like that before be brave and have a go, as I was made to believe that I would never be able to do anything well.

"The past several months have taught me that sometimes we have no control over what happens to us but we can control how we react and that is where our power and strength lies.’

Nicola started by stripping off all the wallpaper and repapering it with a funky Alice in Wonderland styled pattern.

She fitted new flooring, took off the radiator and repainted it, boxed in exposed pipes, put a new toilet seat on, replaced the flush and repainted an old mirror. 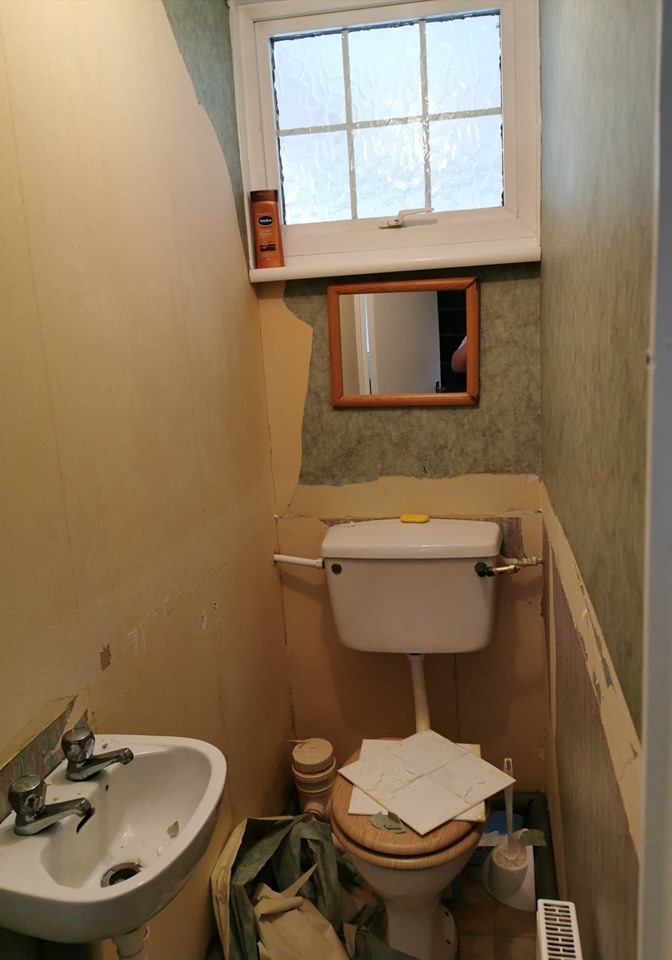 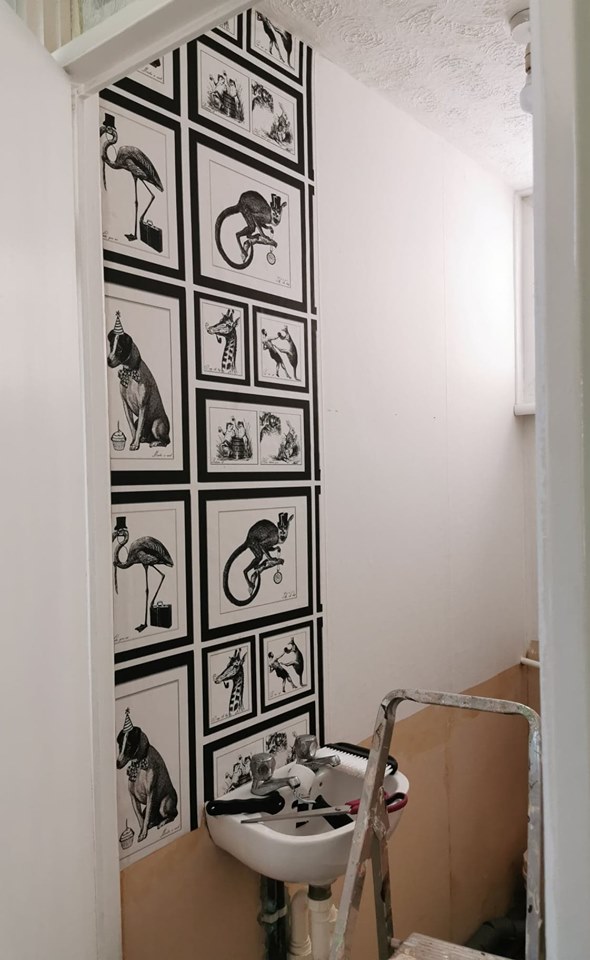 The mother said: "The downstairs toilet was the room I started on. It was my first time doing anything like this, so I have basically not washed that man out of my hair, I'm decorating him out of our house.

"The decor in that room was the previous owners’ and I found it drab and dreary.

"It did seem like I had a big challenge ahead of me but I take part in 100km ultra challenge events for fun, so the decorating seemed like a much easier and less painful challenge.’

However Nicola admitted she does have a newfound respect for professional decorators after attempting the hot and sweaty work during the UK’s recent heatwave.

Onc she stripped the wallpaper off, she put up the lining paper and started painting the panelling two at a time on her breakfast bar.

Each piece needed one coat of undercoat and three coats of the blue paint.

The day I separated from my husband was the day I took back my life with both hands and started my DIY mission on my house.

She added: "When I unrolled the main paper I noticed that it was Paste The Paper and I had a panic dash to Homebase to buy Paste The Paper paste and hurriedly watched Youtube to see how to fold the paper.

"When I actually hung the paper I actually really enjoyed it and I have no idea why I was so worried about it.

"I then moved onto laying the floor and fitting the toilet seat which was very easy and quick to do. But blocking in the cistern seemed like more of a challenge!’

Nicola attached a piece of wood to the wall above the cistern top, slotted two pieces of the panelling together cut to size and attached it to another piece of wood.

She did the same again with another piece of paneling to create an L shape which  enabled her to have easy access to the cistern.

For the main section of the cistern Nicola joined two more pieces and cut them to fit around the pipes and flush lever handle.

She explained: "The top section overlaps the bottom section and holds it in place – as do the two lots of box piping which head to the radiator and sink.

"It can be quickly and easily removed if quick access is needed.

"The panelling needed to be cut to size and slotted together, then attached to the wall, the panels went up quicker than I expected.

"The last thing that needed to be put up was my very apt framed quote." 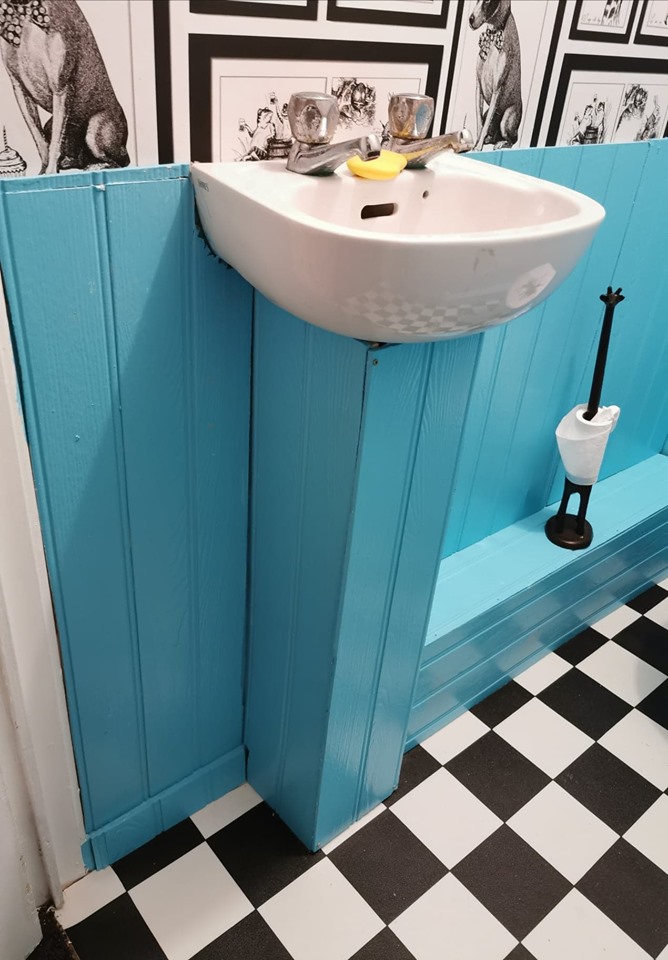 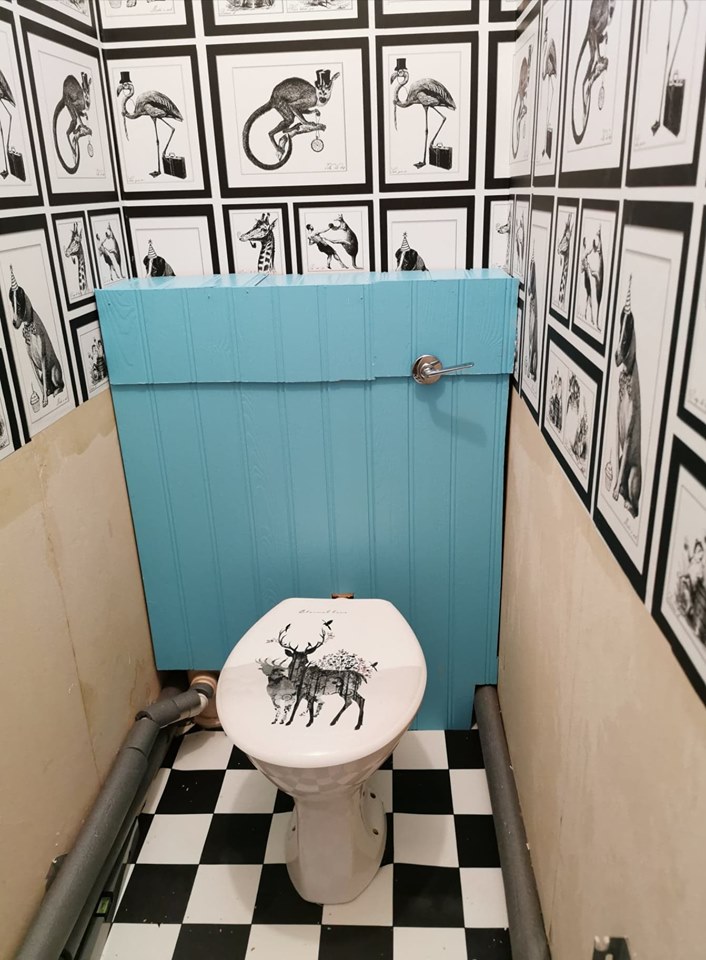 She also spent £20 on a stag toilet seat from Amazon as well as her other online purchases – including an extended length flush for £13 and a giraffe cast iron toilet roll holder for £16.

The mother also bought a Mad Hatter quote on Etsy for under £18.

The whole bathroom makeover cost £284.58 but Nicola believes this was a small price to pay for the happiness that she gained.

She added: "I absolutely adored doing up this quirky little room and my boys love it too.

"It was very fun to do and the only bit which I found hard was cutting in straight lines, they are mainly straight but I don't care if it's not perfectly straight because I am not perfect either.

"I will have a few days break from decorating and then I will start in my lounge!

"I posted my project on a DIY forum and I was completely blown away by the responses."

And this mum reveals the incredible games room she created for her son for just £16.

Plus DIY fanatic totally transformed her kitchen and bathroom for less than £200 thanks to eBay and bargain paint.