MEET the triplets who were born seven-and-a-half years apart thanks to IVF but are still so inseparable they finish each other's sentences.

Helen and Oliver Baker went through ten rounds of IVF and were forced to sell their home to foot the £17,500 bill in their desperate quest to become parents. 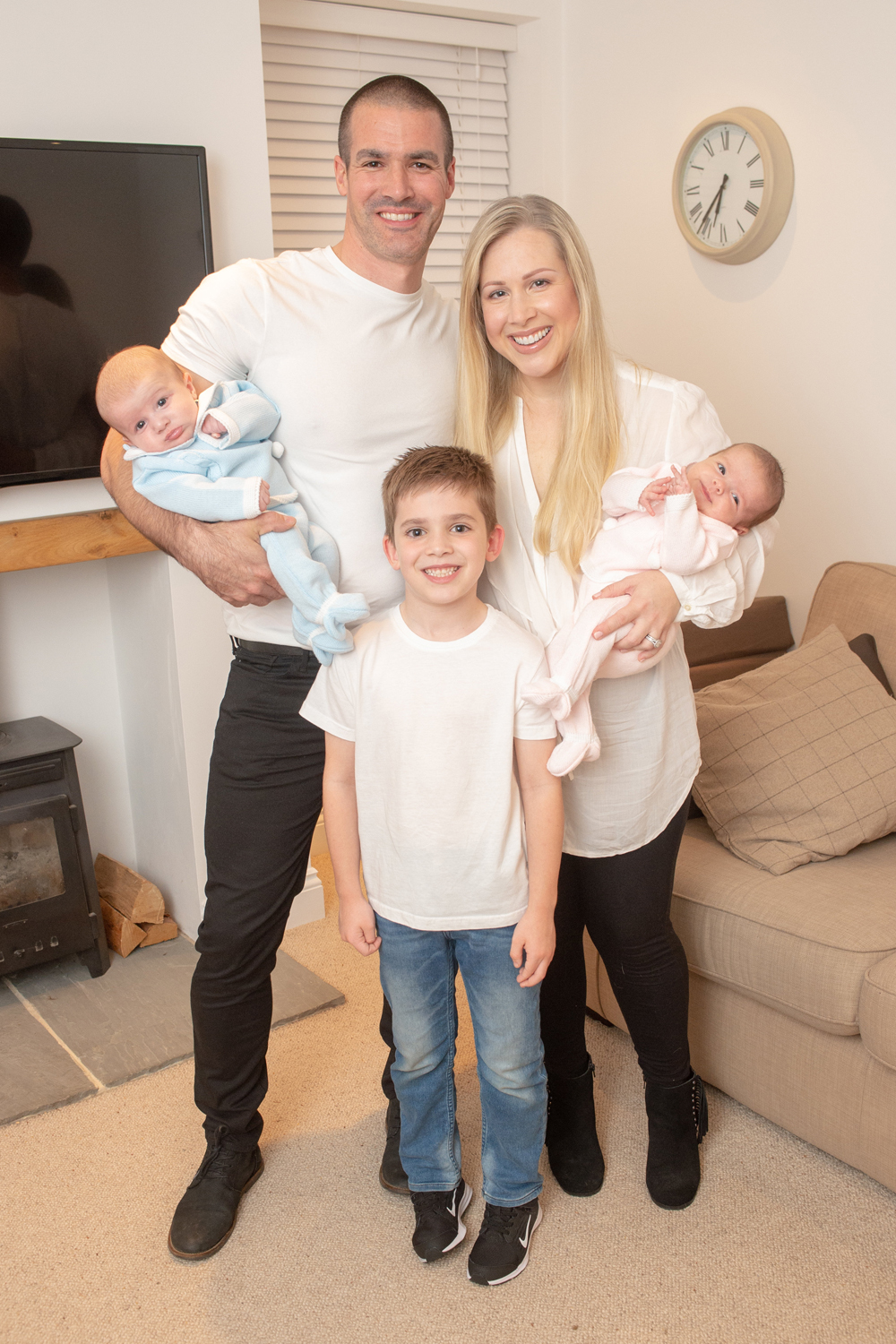 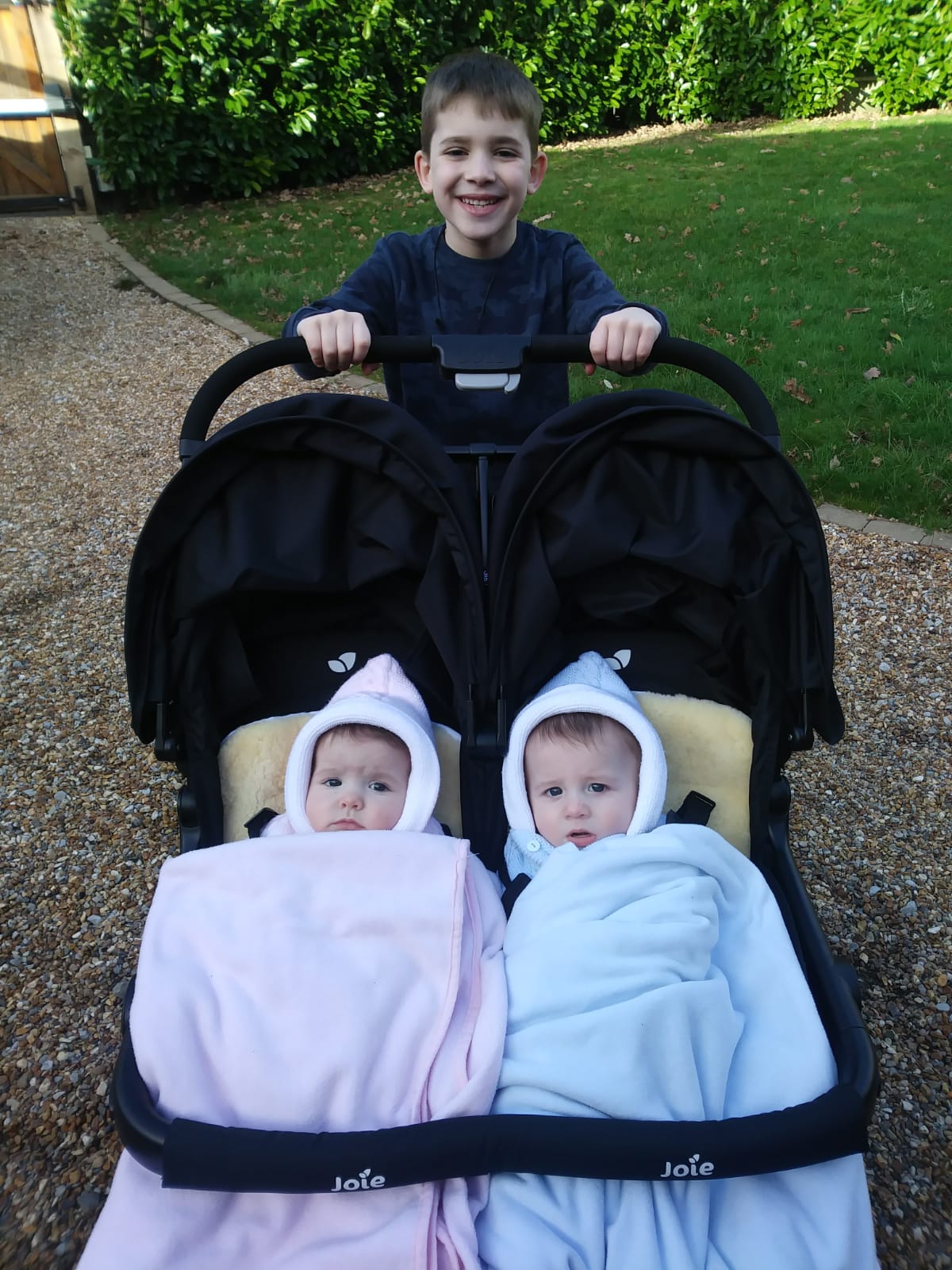 Their first child, Hugo, was conceived on their ninth cycle and welcomed into the world in February 2011 weighing 7lb 1.5oz.

Former model Helen, 42, and electrician Oliver, 41, decided to freeze the unused embryos, so they could add to their family later.

And they welcomed Monty and Coco, three, into the family in August 2018.

The three siblings are considered triplets as they were conceived at the same time, using the same batch of eggs and sperm, despite their age gap.

Now almost three years since becoming a family-of-five, mum Helen says there are striking similarities between Monty and Hugo, 10. She says they have identical dark eyes and hair – so much so it's like "going through a time machine".

The mum-of-three also reveals that the three kids have an "unbreakable bond" . Not only will they often finish each other's sentence, but all three unusually hate butter on their bread too.

Helen from Southampton, Hampshire, said: "People say there's an unbreakable bond between twins and triplets. I would say other kids Hugo's age would find their brothers and sisters annoying, but the three of them are really close.

"Hugo will go over to the cupboard to get an apple and will always get three out. It's never a question, he always wants to help out.

"Monty fell over the other day and was calling out for Hugo rather than Mummy. Hugo really is a big help. He'll help walking them across the street and when he comes in from school they run up and each take a hand.

Of their similarities, she said: "Hugo and Monty really look alike. Of course there's always similarities between brothers and sisters but it's freaky.

"People tell me it's like looking back in time when they see Monty. It's like having my first baby back! He's going through the same obsession with the Hulk as Hugo did. It is a bit like a going through a time machine.

"They didn't share the same first word but they make up for it now with finishing each other's sentences a lot of the time."

Helen continued: "They all hate butter – Coco and Monty don't realise Hugo doesn't like it, so it's not as if they are just copying him."

Revealing that eldest son Hugo is curious over whether he is considered a triplet, Helen added: "Hugo has asked whether he is a triplet and he knows you have to have an egg to create a baby. He gets the gist of it."

"The past few years have been hectic and a bit of a mad house. We have three kids and three dogs now so there's never a dull moment. We're just so happy that against all the chances we now have our family," she added.

Helen and Oliver met in 2003, quickly got engaged and three years later decided to try for a baby. After a year of trying to no avail they began to worry something was wrong, and underwent a series of tests.

During the first eight rounds of IVF, Helen found herself repeatedly in hospital. She developed ovarian hyperstimulation syndrome – a condition that causes the ovaries to swell and become painful – twice, endured a miscarriage, an ectopic pregnancy and was forced to have her fallopian tubes removed.

"I never thought I wouldn't be able to have kids so it was very upsetting when I found out. We are one of thousands of couples in the UK left devastated after being told conceiving naturally wasn't an option so when they told us IVF was the only option I put my heart and soul into the process.

"The drawback has not stopped us from building the family which we have always dreamed of for years."

“I was delighted," said Helen. "It took five years after staying at home researching all the latest health fads and filling the fridge with fertility-boosting food like strawberries and spinach."

The couple then froze the remaining twelve fertilised eggs from the ninth cycle, which were stored at the private clinic. In December 2017, Helen and Oliver decided to try for another child and began their tenth cycle for IVF.

Helen said: "I couldn't believe it, it was like my life was on the up again as many couples aren't even successful having one baby."

Initially, Helen thought she was only having one baby, as doctors had only recognised one heartbeat during her six-week scan.

But at the eight-week check-up, doctors noticed a second smaller heartbeat in Helen's womb – although, it was too small to say conclusively whether it was a second baby.

“I wasn't sure what was going on, and if something strange was happening to my baby, but by 12 weeks, the delightful news came that it was actually a second embryo," Helen revealed.

“I was having twins and it was like a dream come true."

Recalling her pregnancy with the twins, Helen said: "Apart from a little bit of morning sickness, the rest of pregnancy went very smoothly compared to Hugo and I waited in vain for the arrival of my little ones."

"The excitement of their arrival was just too much and I just went mad decorating the nursery across with all sorts of exotic baby stuff," she confessed.

The couple's final two triplets were both at 37 weeks and four days on August 16 at Southampton General Hospital, weighing 7lb 8oz and 7lb 1oz.

After settling into being a family of five over the last few years, Helen said: "It's been hectic especially with lockdown and homeschooling, but we are just so grateful to have them." 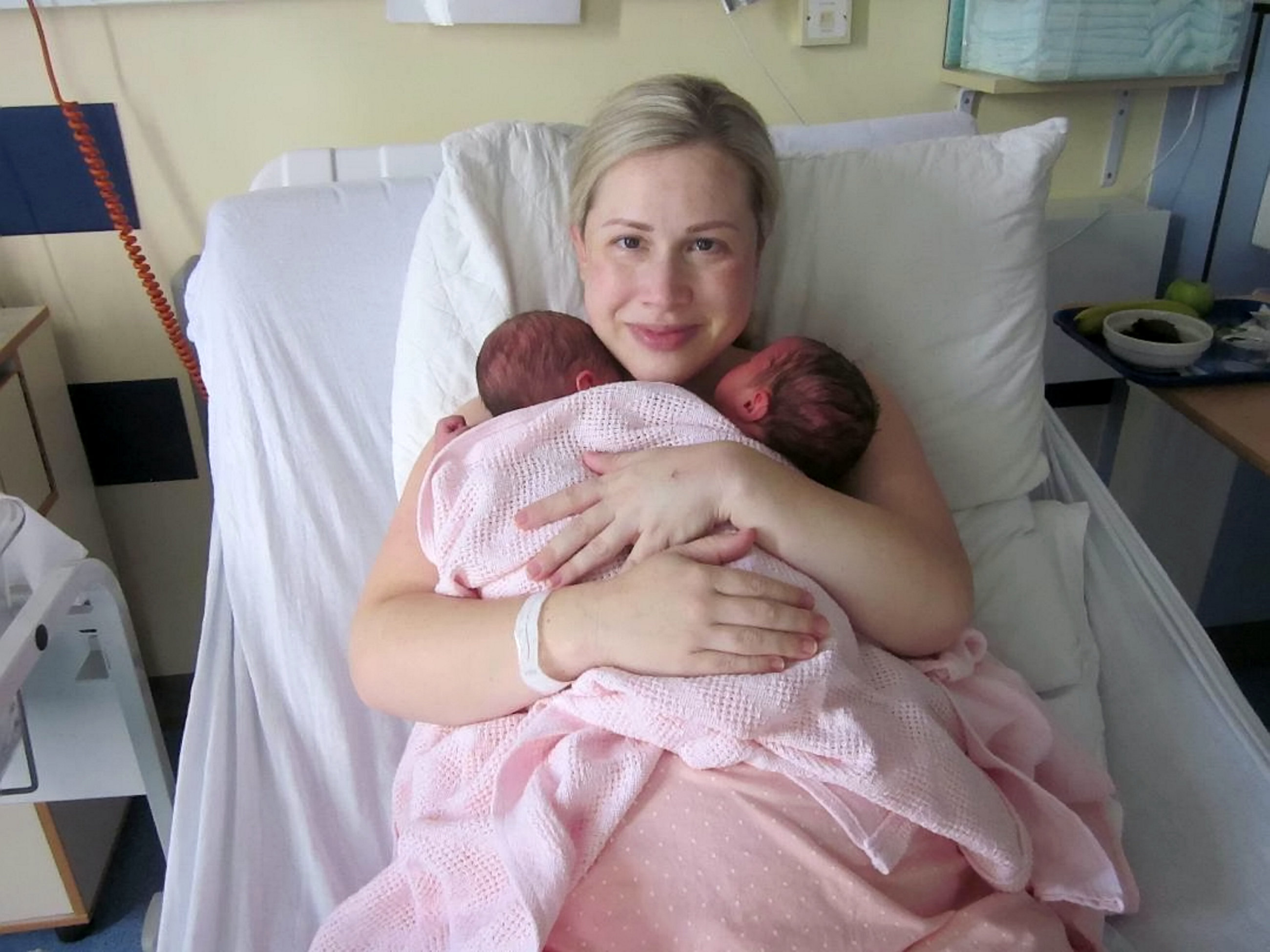 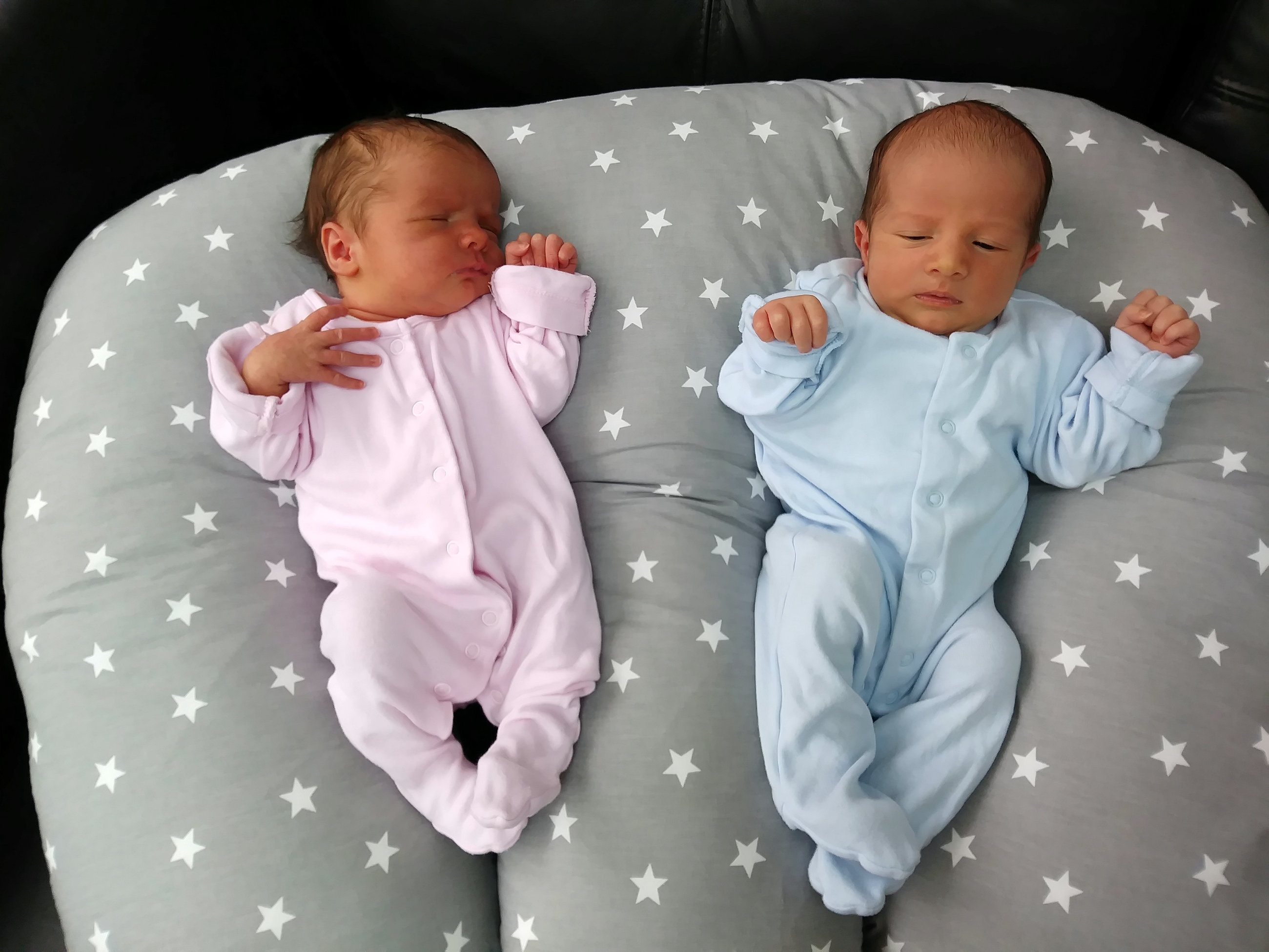 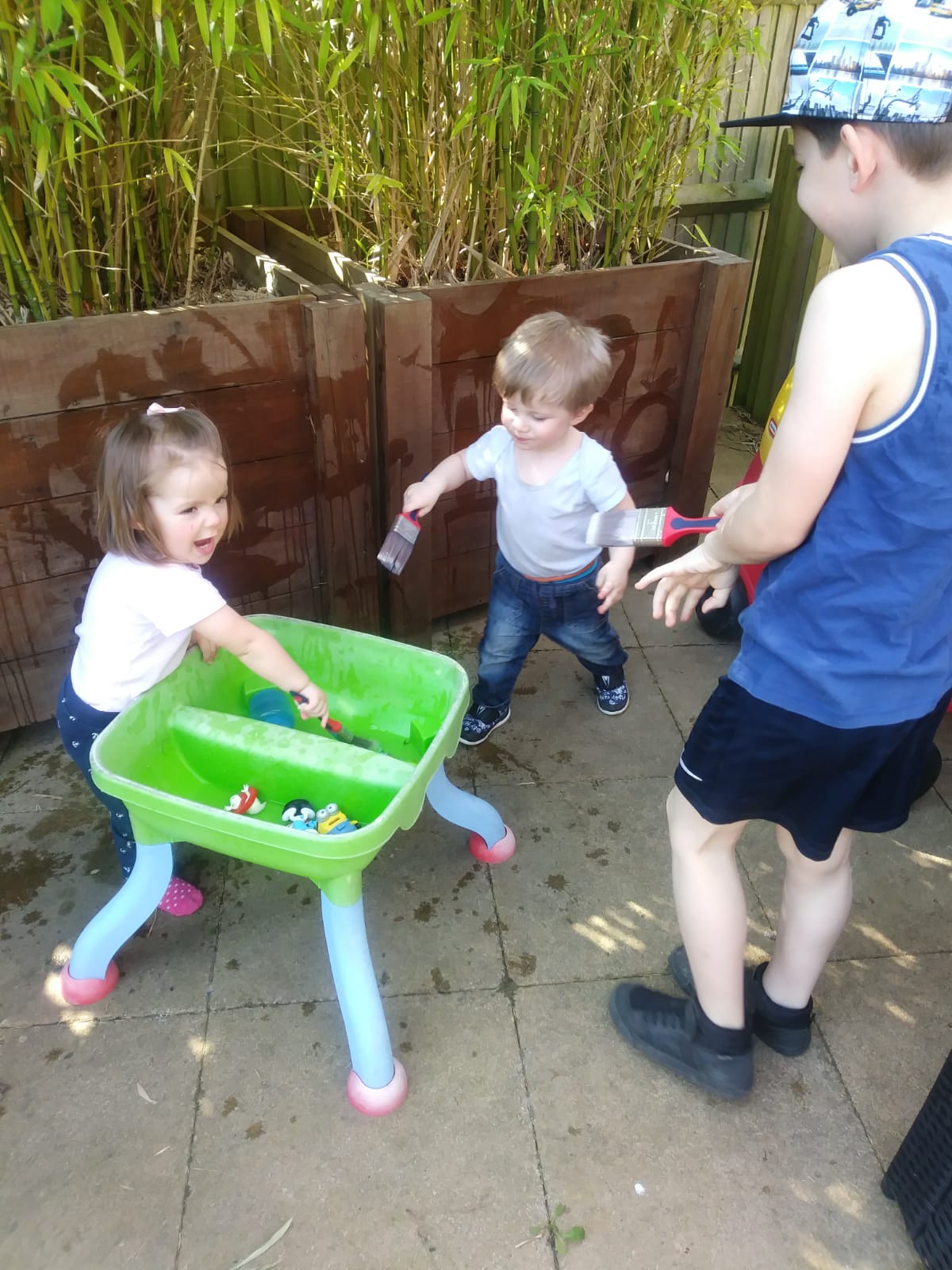 For more real life stories, check out this new mum who revealed 'I was in the shower & needed to pee, suddenly my baby’s LEG popped out – her hero dad helped deliver her'.

Plus, this mum claims 'I’m 35 but everyone thinks I’m my teen daughter’s sister – people gush over how ‘beautiful’ & ‘amazing’ I look'.

And one super organised mum reveals how to NEVER spend more than half an hour on the cleaning & split it into 3-minute chunks.