With the New York charity circuit on hiatus, here is how some philanthropists and society figures are spending their time and resources during the coronavirus crisis.

Where have you been hunkering down?

During the first three months of lockdown my husband, Lance LePere, and I were at our apartment in Greenwich Village. We never left the neighborhood. After that, when we finally got as far as TriBeCa, it felt like we were in a different country.

Lance is creative director for our women’ collection. We do everything together. We work together, quarantine together, take walks together. Our cat is thrilled to be spending this much time with us. She’s a longhaired cat and very indulged. It looks like she’s had a permanent wave.

Has there been an upside to your quarantine?

I’m looking at buildings in the Village I’ve never noticed before. I can still go to Li-Lac Chocolates, my favorite candy store, or around my corner to Three Lives, my neighborhood bookstore. They know me, they know my tastes. These are the kinds of places we need to support. We don’t want to wake up one day and find that everything has disappeared.

Tell us about God’s Love We Deliver.

I’ve been involved since the late ’80s. We were at the height of another pandemic. Neighbors, friends, family and co-workers were sick with H.I.V. and AIDS. There was such a sense of helplessness. The idea that you could go to someone’s home, bring nutritious food and interact with people who felt abandoned immediately struck me as such a brilliant problem-solving thing. 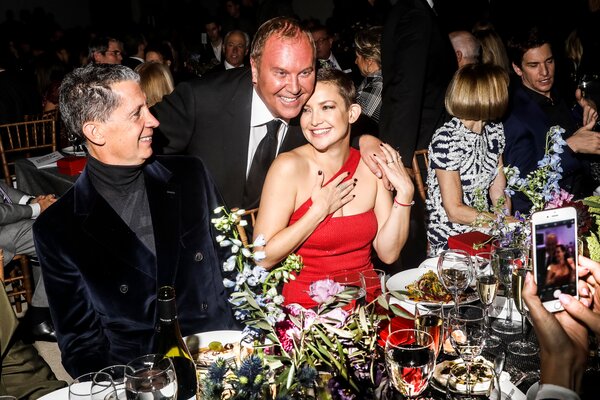 What business hurdles have you faced?

Most years during his time, my entire team would be in Italy. Our main factories are in Bergamo, a region that was the epicenter for Covid-19. This year we were not. We worked via Zoom, designing differently and presenting the collection virtually to buyers and press. I’ve learned that people are adaptable.

How has our new normal impacted your collection?

New York City very much informed the spring collection. I decided I wanted to find a way to show a blend of urban life and nature. I realized that everything has to be very versatile. Are we going back to an office, or are we going to be spending time at the beach? We don’t know. Everything has to have longevity and be worn in so many different scenarios.

What about the way you dress?

I have a rotating wardrobe that’s very focused: It comes down to a black cashmere sweater or a black T- shirt and jeans, or sometimes a pair of camo trousers. For Zoom, I grab something tailored. I want to feel polished and comfortable. You won’t see me in a hoodie.

What have you missed the most?

I feed off of the energy of people on the street. I need the rush of the sights and sounds. I miss all that. I’m jonesing to see a live performance on Broadway. I can’t wait to get back inside a movie theater. I desperately miss travel. Once we are safe and heathy, I plan to walk every street of every city in the world.

Where have you been sheltering?

I live in Baltimore with my wife and children —- a 9-year-old daughter and a 7-year- old son — in a house that is near Johns Hopkins University, my alma mater. When I was growing up, Blacks and Jews weren’t allowed to buy property in the neighborhood. Before that covenant was lifted, they literally just blocked us. But we’re here. Our kids are upstairs right now in their Zoom school.

How have they been navigating home-schooling?

They’ve done well enough. I’m incredibly thankful for how resilient our children are, and just incredibly saddened by how resilient we’re forcing our children to be. We will continue to see inequities in the ways in which our educational resources are being apportioned. There is no way we are not going to have severe implications. It’s not because the students aren’t trying. It’s because we weren’t prepared, and we haven’t prepared them.

How have you kept up with your work?

We closed our New York offices during the first days of March. We started seeing very early just how significant the impact of this virus was going to be. Now I drive back and forth to New York to have meetings with community members. You can see how long the tail is on this. But the severity, the impact — those are things no one could have predicted.

What is driving Robin Hood foundation these days?

The relief work that we have done has been centered on literally getting cash into people’s hands for food, housing, legal aid, medical assistance, all of those things. We saw early on that some of our government policy initiatives were intentionally leaving millions of people out.

Where does your sense of social commitment come from?

I’ve seen in my own life how opportunity has been very miserly apportioned. My motivation also comes from family. I came from a legacy of teachers and preachers. That advocacy, that activism, that belief in service, as my mother would say, I got it honestly.

You are a novelist and memoirist. Have you found time to write during lockdown?

I just released a new book, “Five Days.” It was actually about the unrest that took place in Baltimore after the Freddie Gray killing five years ago. The publisher wanted to put it out in March, but I told them that the last thing on my mind was a book tour. They came up with a new arbitrary publication date. The book came out within weeks after the George Floyd and Breonna Taylor killings. People would tell me, “Your book is so timely.” But name a moment when it wouldn’t have been timely.

Have you found opportunities to take up new pursuits?

I love hiking and fishing. My wife is like, “You’re the only person I’ve ever known who came up in Baltimore and the Bronx who is an outdoorsman.”

Which things don’t you miss?

I don’t miss travel. I got time back with my family that I didn’t even know how to ask for. I had come to dread Sunday nights. That was because I was catching the 5 a.m. train to New York Monday mornings. I knew the kids would wake up and I’d be gone.

I used to write a little letter every week before going and leave it in their room. It would contain a quote or mention something we did that was fun over the weekend. My kids kept every letter. One of the things we’re thankful for is that I don’t need to write those letters anymore.

Occupation: director of the Brooklyn Museum

Favorite Charity: the Campaign Against Hunger

Where have you been sheltering?

We were at our lake cottage in Putnam County the first five or six months. After that I came back to New York. After 21 years of living in the East Village, I moved to Crown Heights so that I could walk to work. My daughter, her boyfriend and I have two floors in a brownstone. My great luxury is that we have a fireplace. I never thought that I would have that in New York.I love Brooklyn. After the election there were hundreds of people spontaneously gathering at Grand Army Plaza and in the streets

The museum has served as a community refuge during this period. What motivates people to visit?

Looking at history through art can be a way that grounds us. What we’re going through now, other civilizations have gone through historically. You sense that we can rise above it. Looking at art encourages people to turn to creative action to get through a difficult time.

Have you seen examples in your own life?

My daughter Paris Starn — she is 26 — comes to mind. She had a small, young fashion brand and struggled during this time. She cooks now, she’s doing pop-ups at restaurants and conducting online classes. She’s my best role model.

What is your typical day?

I’m working 12-hour days with back-to-back online meetings. Everything is Zoom, Zoom, Zoom. My daughter makes dinner every night. I can’t cook much more than spaghetti and meatballs. Last night she went out to dinner, so I made scrambled eggs — no salt, no pepper, no nothing.

Can you explain how you have expanded the museum’s mission?

We used to think of museums as repositories for great art. But the museum is also a place for community gatherings and public service. Covid-19 has made that all the more urgent. People were using our campus outside for exercise, so we provided spaces for socially distanced yoga and sound baths.We turned the museum into a site for food distribution. We partnered with the Bed Stuy Campaign Against Hunger to provide boxes of fresh produce and Thanksgiving turkeys for local families. That’s one way we pivoted.

Our lobby became a polling site for early voting. People cast ballots against a backdrop of Ed Ruscha’s “Our American Flag,” which showed the flag in tatters. We installed Constance P. Beaty’s portrait of Ruth Bader Ginsburg for inspiration. We were finally able to open our Studio 54 exhibition. People were coming in throngs. To see all of them dancing through the hallways was great — when was the last time we danced?

Interviews have been edited.