Home » Fashion » Perfect Timing for a Free Wedding in Austin

Lollie May Martin and Taylor Brittany Maanao got married after five years together. But they say they actually fell so hard and so fast for one another that they wanted to get married after only six months.

Ms. Maanao’s mother had strongly suggested they wait. “She told us that we still had so much to learn about each other. So, we waited,” Ms. Martin says.

Ms. Martin, 31, is majoring in paralegal studies at Austin Community College and began an internship at the Stewart Law firm in Austin, Texas on Jan. 18. Taylor Brittany Maanao, 29, works as a personal assistant and property manager at Tiger Lily Ranch in Sheridan, Texas. They live in Round Rock, Texas.

They met Aug. 11, 2012 when Ms. Martin was bartending in Austin. “I saw Taylor from across the room and I remember thinking ‘Wow, that girl is amazingly beautiful,’” Ms. Martin said.

Ms. Maanao was clearly taken with Ms. Martin too. When she closed her tab, she wrote her phone number on the back of her receipt before handing it to Ms. Martin. But Ms. Martin never even saw it. “Nothing ever came of ‘us’ after that night, but it was like the universe kept bringing us together,” Ms. Martin said.

About a year later, Ms. Martin took her dachshund Marley to an event at Barton Springs. “It was a weenie dog swim meet. To my surprise, Taylor was in charge of the whole thing and was also the judge. I was with my girlfriend at the time and so we didn’t have a lot of conversation, but we were both very happy to see each other. Marley actually won that day!” 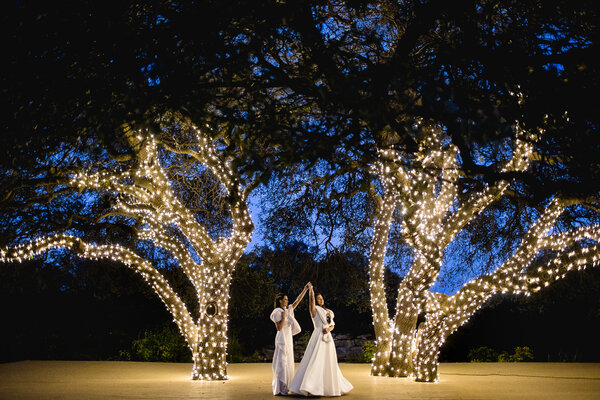 Another year went by before they ran into one another at a Pride event in Austin. “Taylor confronted me that night asking why we had never gone on a date. The truth was simply that I was in a relationship, but I had never forgotten about her in all those years, nor could I,” Ms. Martin said.

And then another year passed before they saw each other again. In 2015, Ms. Martin was working the front door at another club and Ms. Maanao walked in. “I knew at that moment that I wasn’t going to let her slip out of my life again. When she left, I sent her a message and told her just that. She replied and said she felt the same.”

They had been together for three years when Ms. Martin went to Europe to study. After a month, Ms. Maanao went to see her and surprised her by proposing on July 10, 2018 in Santorini, Greece.

When a white barn owl flew past them that night, Ms. Maanao knew that was the moment she should propose. Ms. Maanao’s grandfather had recently passed away; Ms. Taylor said she knew that the appearance was Ms. Maanao’s “Pops” telling her that he approved.

Three months later, the couple went to celebrate Ms. Martin’s birthday at her family’s lake house on Lake Lyndon B. Johnson. There, it was Ms. Martin’s turn to get down on one knee and ask for Ms. Maanao’s hand.

The pair planned to get married in October 2021 in hopes that the pandemic would be a distant memory by then. “But lo and behold the universe had another plan for us,” Ms. Martin said.

On Sept. 16, 2020, the couple attended the grand opening of Antebellum Oaks, an event space in Austin. The venue was giving away a $20,000 wedding or event package. They won. There was one catch: the prize needed to be redeemed before Feb. 28, 2021.

Although the cocktail hour was held outside, the reception itself was indoors. It easily fell well below the Texas Department of State Health Services Guidelines that requires wedding venues be filled at 75 percent or less capacity.

“Most people wore masks and Covid comfortability wrist bands,” Ms. Martin said. “We felt safe because most people got tested for Covid before the event.”