In a new women’s and men’s ad campaign, Theory is paying homage to its top-selling category, pants.

“The story for us is interesting because it’s not a story just about a category. It’s about an origin,” said Siddhartha Shukla, chief marketing officer of Theory.  “Andrew  [Rosen, cofounder of Theory] created Theory [in 1997] because he saw an opportunity to give women a way to wear pants in a much more modern way.”

While pants were introduced into women’s wardrobes many decades ago and popularized by the European houses, Shukla said, “What’s interesting about Theory was an opportunity to modernize the silhouette. And you can take what was classically a masculine garment and through innovating the fabric, you could give it a more feminine sensibility.”

According to Shukla, Theory would weave wool with Lycra to create a “very fine, Italian wool that had stretch in it.”

“The stretch of the fabric gave the form of femininity and gave the appropriateness for a new way of wearing pants. Pants are not an accident at Theory, they’re part of the origin and the founding of the company,” he explained.

For fall, Theory has a strong lineup of pants with a clear emphasis on versatility from the fabric and end-use perspective.

“What the past year has taught us is how dynamic our wardrobes have to be. And how versatility in a wardrobe is really important, and the ability for something to look sharp and professional and sophisticated, which is a very Theory concept, but for it also to have comfort, and have multiple end uses and to be able to move from the workday to the weekend — the ability of the range of silhouettes to accompany a woman was notable.

The Cape Makes A Return On The Runway 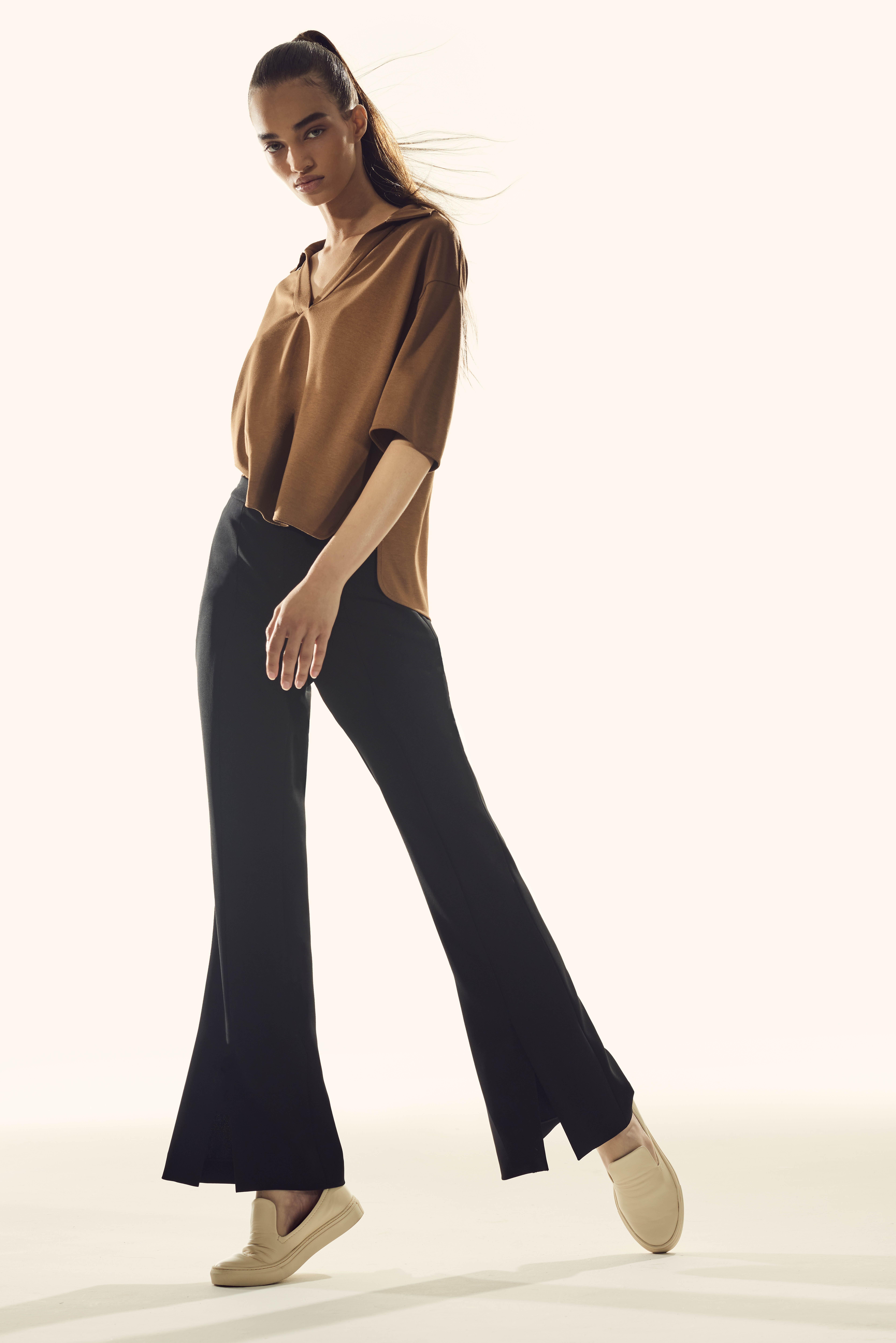 An image from the new Theory pant campaign. Richie Talboy, courtesy of Theory

“It’s a moment we’re emerging from the pandemic. We built the fall line with a new way of working. The idea of workwear was going to be reconceptualized based on a new style of working, whether that’s a hybrid of office and home.…We’ve definitely seen our customers appreciate the diversity and they want multiple end uses,” he said.

Theory’s bestselling pant is still a classic trouser in traceable wool. They’ve been able to pivot into other styles and fabrics, such as stretch cotton, stretch twill, silk crepe and classic stretch leather. The brand also has a new legging in a stretch cotton twill with button details. “It’s a legging that definitely belongs in the weekend, but it’s a legging you can wear throughout the week,” he said.

He believes comfort comes in multiple forms, be it the shape of the pant (a new carrot-shaped pant that is roomier and has volume through the leg), or even in the new leather style. Another new proprietary fabric is a Ponte fabric for men and women called Precision Ponte. “It’s a very classic fabric with high stretch and you can wear it seven days a week, with no wrinkling,” he said. 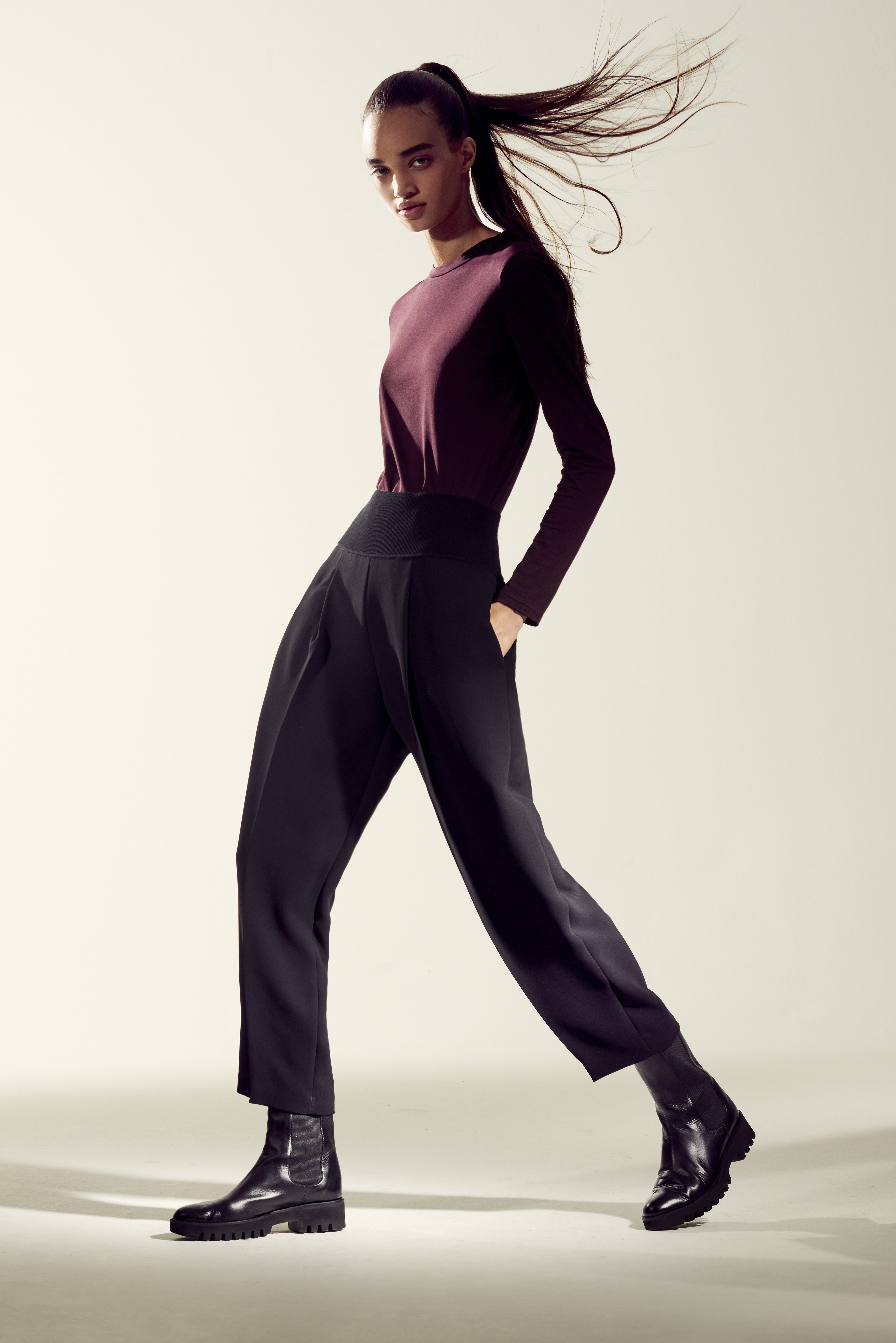 Today, the company will introduce a women’s and men’s  ad campaign, photographed by Richie Talboy, that shows the pants in motion. It’s a multimedia campaign that will run across Theory’s own channels as well as a significant digital advertising spend to support it. The campaign will run through November. It features male model and dancer Alton Mason and female models Ellen Rosa and Hirschy Grace and was shot in New York. 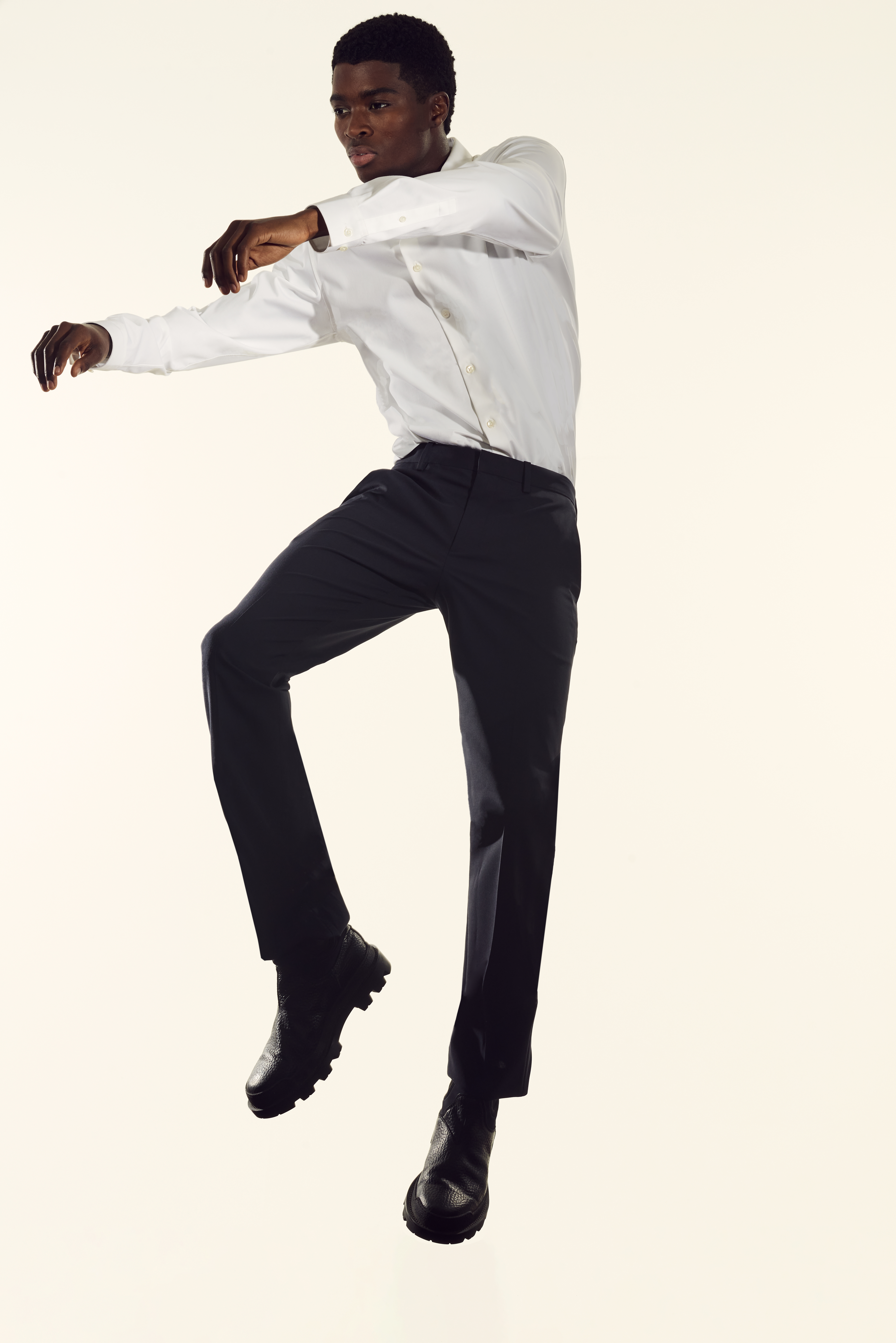 “It’s a mixture of still images of men’s and women’s and video. It shows the pants in motion. The tagline is ‘Tailored to a life in motion,’” Shukla said.

A separate campaign, which is the major fall brand campaign, launches in mid-September.

Theory Launches Luxe Lounge for On- and Off-duty Hours