Adina Kamkhatchi and Isaac Mizrahi should have met years ago. Their lives were entwined; they just didn’t know it.

Both grew up in the Midwood section of Brooklyn, in a tightly knit community of about 40,000 orthodox Sephardic Jews, mostly from Syria. Both spent summers in Deal, N.J., and vacationed in Aruba. Two years ago, they had both been staying at the same hotel, the Marriott Stellaris, at the same time. But despite that fact that the annual pilgrimage to the Dutch island often serves as a giant meet and greet, they never met.

“Marriages usually come out of this,” said Ms. Kamkhatchi, 25, the founder and designer of Adina’s Jewels, a jewelry company. Her pieces have been worn by celebrities like Blake Lively, Bella Hadid, Billie Eilish, Cardi B, and two Jenners (Kendall and Kylie).

They met via a speed-dating app called Filter Off. But it most likely wouldn’t have happened without Covid.

On April 26, 2020, Ms. Kamkhatchi was stuck in the office late at night. After a full day of printing, picking, packing and shipping orders, she remembered a promise she made to her best friend to give the app a chance.

At 8 p.m. she logged on for the first time. The fourth face to pop up was a real estate entrepreneur, Mr. Mizrahi (no relation to the fashion designer), who lived a few streets over. They FaceTimed for 90 seconds, before the app cut off. Luckily, they each gave the other a thumbs-up sign, and were able to chat directly. 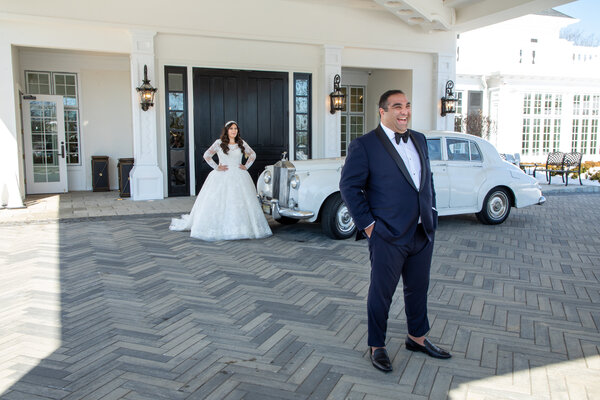 On their first date a week later, they went to a Starbucks drive through; everything else was closed. Mr. Mizrahi, 29, bought her a $2.50 cup of coffee. And she was hooked.

Five minutes in they were already making plans for their second date. “We just felt like we had known each other forever,” she said.

He, too, was entranced noting that she was different from the other women he met. “She had a career and was curious about the world,” he said.

“When you get to know Adina you realize she’ll do anything for anyone,” he added. “If she can help, she’s there. It was one of the qualities that stood out. I was like, ‘Wow, this can be the mother of my child. My wife.’”

When she got home, she told her mother that she was going to marry him. “She’s like, ‘You’re hallucinating,’” Ms. Kamkhatchi recalled. “I said, ‘I promise you. This is the guy I’m going to marry.’”

He proposed seven months later, on Dec. 10, with a 4.2-carat oval diamond set in an ultrathin, 18-karat yellow gold band with a platinum setting that Ms. Kamkhatchi had designed.

And on Feb. 21, she made good on her promise: They were married before 100 guests by Rabbi Ari Azancot at Shadowbrook at Shrewsbury, an estate in New Jersey.

Everyone aside from direct family members who had quarantined, was required to wear masks throughout the entire wedding and to socially distance.

“I don’t feel it was rushed. I know what I want and I’m very decisive,” Ms. Kamkhatchi said. “To me, there’s no point in waiting. If I learned anything during Covid it’s that life is so unexpected and it’s too short. So, why wait? If you feel it in your heart, go for it. You don’t know what’s waiting for you tomorrow.”