A WOMAN was left shocked after her builder vanished mid-way through a project, and when she asked him why she got a very creepy response.

Amy Wilks had hired a bloke to re-plaster a kitchen, after getting a recommendation from a friend. 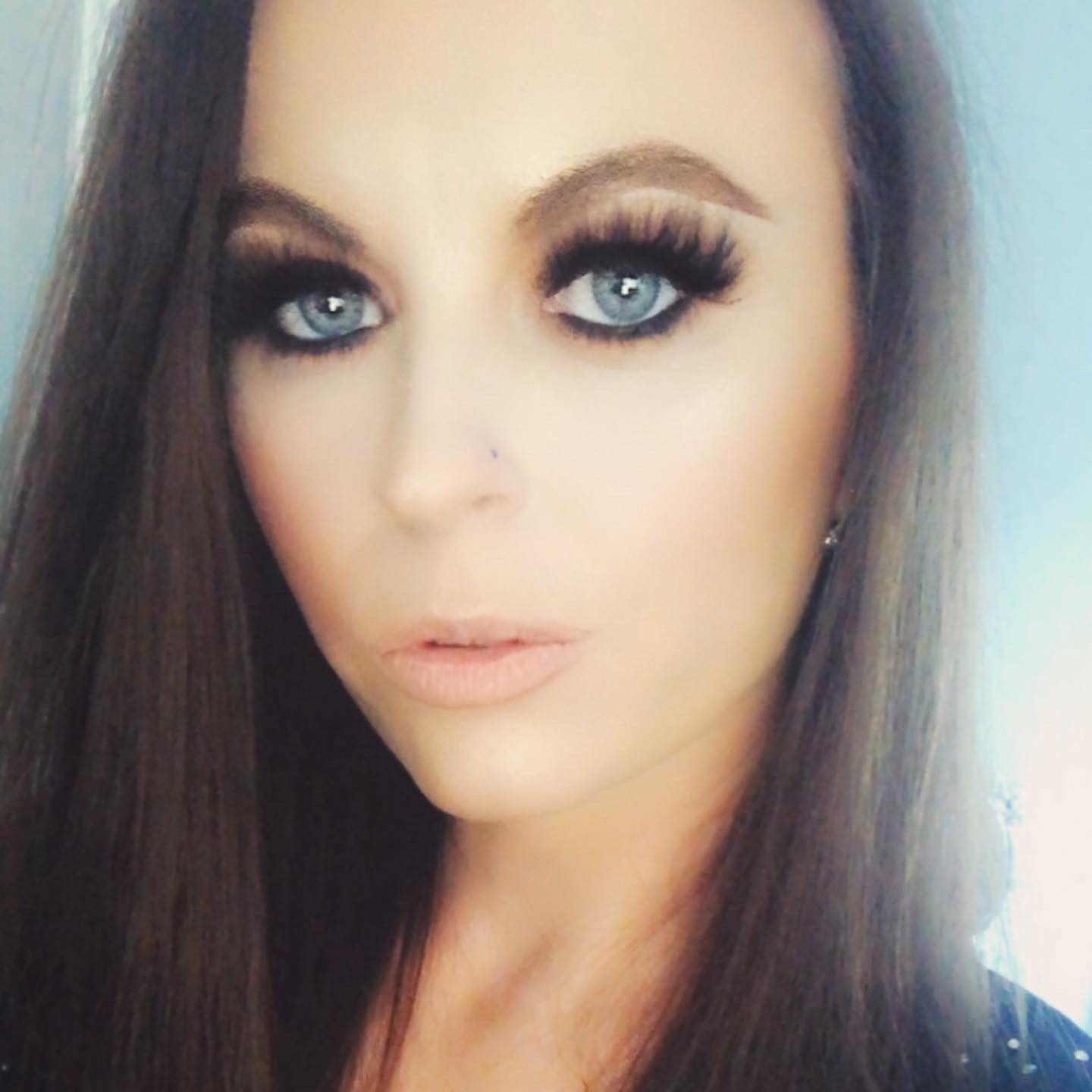 The man, who Amy described as being ‘old enough to be her dad’, worked on the project for three days, before disappearing in the middle of the day.

He tidied up after himself before he left, leaving Amy puzzled as to if he was coming back.

Eventually she messaged him, inquiring as to his whereabouts – and if he was going to finish the job.

To her shock she received a filthy reply, with the disgusting builder claiming he’d left as he wanted to perform a sex act on her. 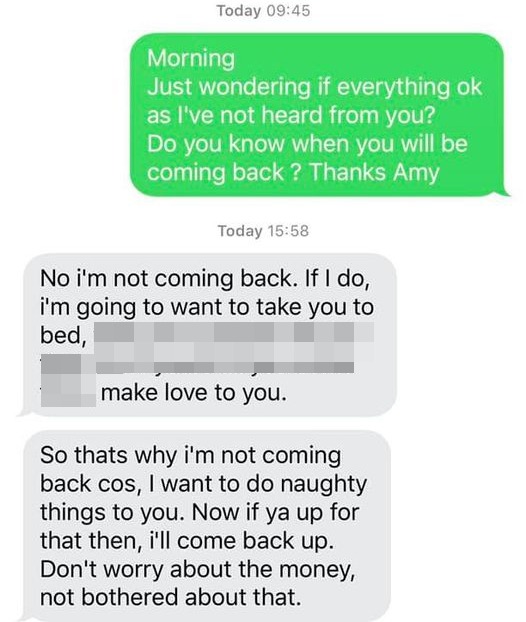 Sharing the text exchange to Facebook group Girlsmouth, Amy said: “So I hired a plasterer through recommendations… 3rd day in after 3 hours he just disappeared no text no I’m off nothing.

“I messaged him this morning to end up with this reply.

“I was in that much shock I didn’t respond.

“Silver lining I got half my kitchen done.”

Amy shared the text online, where she asked the guy: “Morning just wondering if everything ok as I’ve not heard from you?

“Do you know when you will be coming back?”

The bloke sent a shocking reply, where he said: “No I’m not coming back”.

He went on to describe some very x-rated scenarios, before saying: “So that’s why I’m not coming back cos, I want to do naughty things to you. 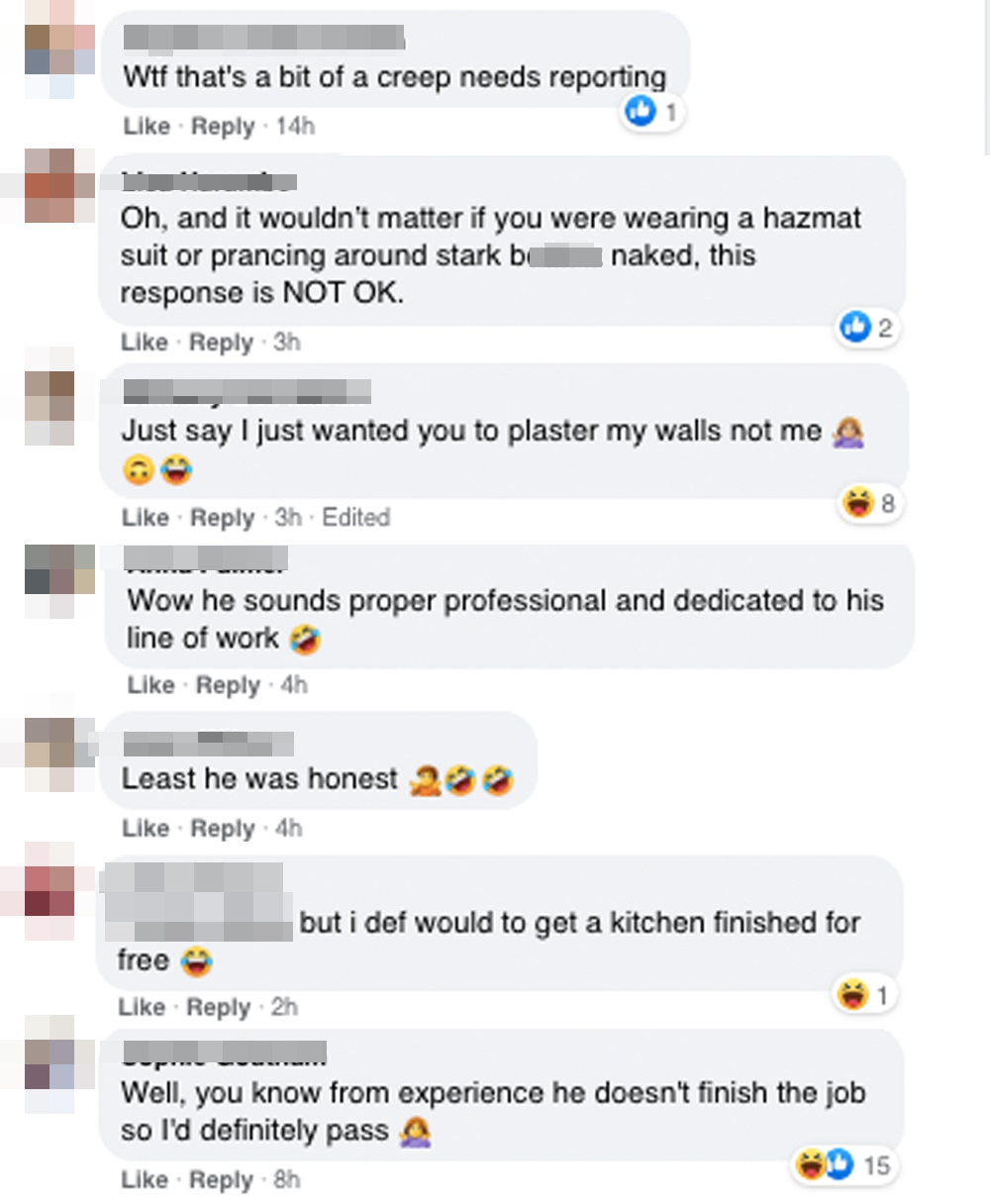 “Now if ya up for that then, I’ll come back up.

“Don’t worry about the money, not bothered about that.”

A shocked Amy added “also I only made him a cup of tea a few times in my fluffy pjs.”

Thousands of people commented on the post, with one person saying: “Wtf bit of a creep needs reporting."

Another wrote: “Least he was honest."

A third commented: “But I def would to get a kitchen for free."

While this person wrote: “Wow he sounds proper professional and dedicated to his line of work."

Meanwhile this woman has the best comeback for a creepy bloke who asked to see her wearing a bikini she was selling.

And a woman receives a wrong number text about someone’s cheating boyfriend and sends the perfect response back.

Plus these are the most awkward texts ever prove why a call is best… from one bloke’s brutal booze fail to a cringey romance revelation.