One little girl is being praised on social media for conjuring up a spooky theme for her birthday party: “The Nun.”

Three-year-old Lucia celebrated her birthday in Monterrey, Mexico, on Monday, and decided on a party inspired by the 2018 horror film “The Nun” — an installment within the popular “Conjuring” universe.

“Her parents did not question it at all, they were very supportive of her wanting this theme, especially because Lucia was very persistent,” Lucia’s cousin, Andrea Villarreal, told My San Antonio.

Villarreal, who attended the party, shared photos on Twitter — which quickly went viral. 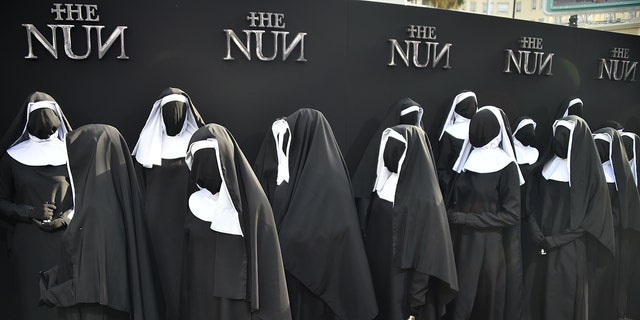 In the pictures of the ghostly event, Lucia, dressed as the demonic eponymous character, is seen holding hands with a piñata designed to resemble the Nun’s character, as well as eating a cake with her name on it and a picture of the Nun from the film.

"[Her parents] had to go out of their way to make the pinata and cake special for the occasion because as you can imagine, those aren't popular requests,” Villarreal told My San Antonio.

On Twitter, commenters were quick to celebrate the little girl’s original idea.

Even Bonnie Aarons – the actress who plays "the nun" in the film – responded to the tweet, wishing the little girl a happy birthday.

Actor and filmmaker Jordan Peele also responded to the tweet, asking if Lucia had a godfather.

However, celebrities and Twitter users are not the only fans of the little girl’s theme: At least one little girl who attended her party also got in on the creepy fun, as seen in photos Villarreal shared.

And for those concerned about the little girl’s movie habits, Lucia’s parents said she usually does not watch horror movies, and did not think of “The Nun” as a scary film. In fact, it was Lucia who demanded to watch the entire film after seeing some of it at her grandmother's house, Villarreal told Buzzfeed.

"I know people see 'The Nun' and get scared, but Lucia tells her mom that nun is protecting her," Villarreal said.