Home » Lifestyle » A pig in a spacesuit? How Geoff Raby amassed a $2 million Chinese art collection 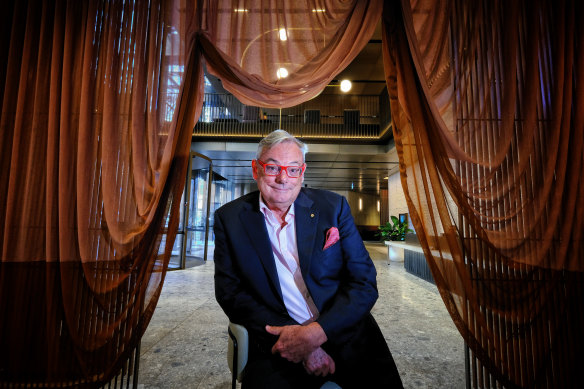 In 1986 as Chinese artists bopped along to music at parties with Australian diplomat Geoff Raby, relations between the nations seemed in pretty good shape.

“The 1980s were totally bohemian, there were parties, lots of warm beer. Little cassettes playing rock music. Diplomats and a few business people were really the first to internationalise Chinese contemporary art,” he recalls. An ebullient figure, Raby fondly remembers befriending artists now fixed in time in photos of long lunches. Beijing’s artists were spreading their wings as the one-party state appeared to allow it.

Raby first went to China as an economist with the Australian embassy and returned in 2007 as ambassador. He acknowledges that in both spells he experienced a China more open to the West, with riches flowing on the back of increased global trade.

“From 1979 you have a liberalisation period and Deng Xiaoping. It created a sense of optimism and hope. In that moment you had artists, many trained to a very high technical level, learning about western art and they had access to art books for the very first time. Their enthusiasm electrified anyone like me who was interested.”

Collecting art became his passion, part of the bridge-building we often call soft power, where culture tries to succeed where force fails. How he championed contemporary, often politically charged work, without offending his hosts is a story of diplomatic tact, enthusiasm and good timing, as China opened itself to the world. 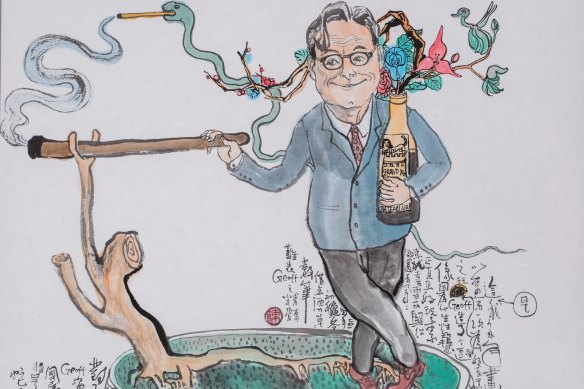 Over 35 years, Raby collected close to 200 works – paintings, sculpture, photography, installation, printmaking and calligraphy. He recently gave the collection to his alma mater La Trobe University and the collection will be displayed for the first time at Bendigo Art Gallery, in tandem with an exhibition drawn from the city’s Golden Dragon Museum.

In Australia and around the world, artists such as Guan Wei and Ai Weiwei are now well known and represented by major global galleries; but contemporary art that was not propaganda for a one-party state needed early advocates. Raby is regarded as one of those early champions alongside trailblazing galleries such as Red Gate.

Through long-term friendships with Chinese artists, some of whom moved to Australia, he’s credited with increasing the wider recognition of their work.

Raby argues that instead of playing it safe, it is precisely because of their role, and their means that diplomats recognise cultural treasures and create collections. “In 1986 when I first went to Beijing the artists weren’t allowed to exhibit anywhere because they weren’t part of the academy and they had to find makeshift ways of exhibiting. We used to give our diplomatic apartments in the compound over to the artists to hang their work for a weekend. 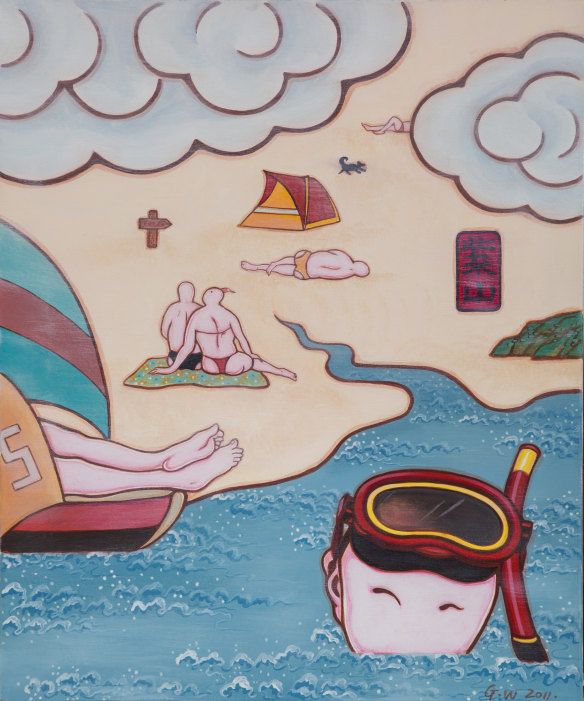 “At that time every single Chinese person who came would have to be escorted into the apartment and have their names recorded. I felt like I was living in the 1890s in France when the impressionists were outside the academy. From that moment on I realised the huge changes going on in China were reflected in cultural fields, including visual arts.”

In Melbourne to oversee the selection of works for display, Raby laments the rising tensions between Australia and China under Xi Jinping, and the absence of those interactions. Still an opinionated commentator after leaving diplomacy, he’s written: “We have not been able to exert influence in a region in which we most aspire to do so.”

He’s critical of both the past and present prime minister for not mending the relationship. He says he has more confidence in the Foreign Minister Penny Wong, describing her as considered and calm, avoiding “exaggerated rhetoric”.

Australians are losing the opportunity to learn more about the Chinese people, beyond the Communist regime, he says. “One of the most important things is culture. We can blow apart all the stereotypes about each other.”

There are few more heated debates in Australia than our past, present and future with China and the United States, and Raby dives in by saying he’s been called a “panda-hugger” – soft on China. Yet some of his satirical artworks have poked the panda hard. 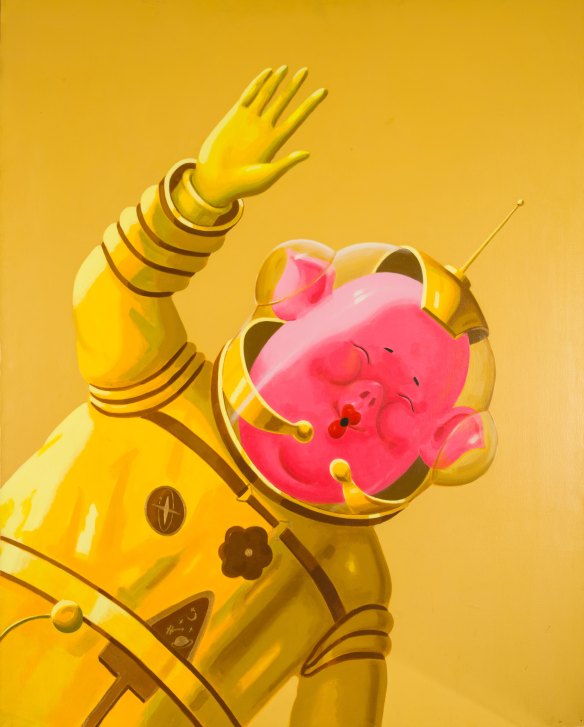 “Li Dapeng’s art work of the pig in the spacesuit waving at the viewer is really political,” he acknowledges. “Pigs are a symbol in China of being happy, greedy and stupid. What it’s doing is making fun of prestige projects like the space program. So I think this artist was brave.

“I used to have it in my residence and the Chinese would visit and were totally perplexed at the ambassador having a pig in a spacesuit on the wall. Chinese communists had no irony.”

Another significant work in his collection is the chilling photographic self-portrait Dialogue. The artist Xiao Lu points a gun towards the viewer. It references a notorious event in 1989 when the artist walked into a Beijing art gallery and fired a gun with live bullets at her own installation. The act was interpreted as political and read as the first shot of Tiananmen Square. A loss of innocence for a country that had been glimpsing looser state controls.

The shot shut down the exhibition, the artist was detained and later sought refuge in Sydney. Yet liberalisation waxes and wanes. By 2010, her memoir was launched at the Australian Embassy in Beijing by Raby.

His own memory of Tiananmen Square, witnessed from a balcony, remains sharp. “You could see the sky lighting up and armoured cars speeding past. The next day there was a systematic attempt to terrorise the population of Beijing with trucks going in just shooting constantly and no one knew what was going on, there was no information. In retrospect there was maybe three to four days of deliberate actions to scare foreigners out of Beijing and to terrorise the population, and it all worked for the government.” 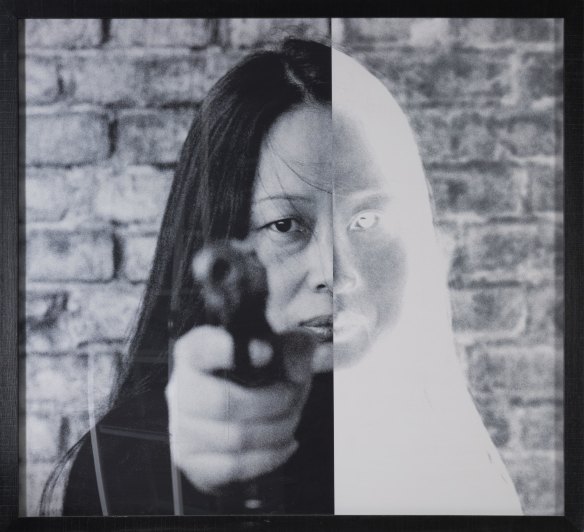 “I am unfairly condemned in the media often as being a panda-hugger but if you look at anything I’ve written I never miss an opportunity to remind people it’s a one-party state with a terrible human rights record.”

He says diplomats “have to make our points how we can. Western embassies in China try and advance human rights and political liberalisation, that’s all part of our core agenda.”

As history lurched on, in the new millennium China again welcomed visitors, hosting the Olympic Games and foreign journalists, including Australians. Exiled artists were returning to Beijing. Raby returned as ambassador in 2007.

“I had easy days, the relationship was in great shape,” Raby says of his later years in China, while prime ministers Howard, Rudd and Gillard were in office. “The whole contemporary art scene was exploding in the 2000s. Everyone was excited about it, it was the hottest thing around internationally.”

Raby makes it clear his collection is a highly personal selection, spanning key shifts such as the Chinese avant-garde, “cynical realism”, pop and socialism, surrealism and fantasy – all created while China’s dramatic changes inevitably influenced the arts. Artists not only ventured dissident ideas, but also took aim at consumerism and rapid development during China’s astonishingly fast urbanisation.

Yet censorship was never going to disappear. In a foreword to Damian Smith’s book about the Raby collection, Spain’s former ambassador to Beijing, Manuel Valencia, writes: “Irony, hidden messages and sense of humour were heavily needed to avoid the implacable censorship of the Ministry of Culture and Propaganda.”

The wit of disguised meanings clearly appeals to Raby, as does a sizeable collection of erotica, including Ling Jian’s irreverent The Birth of Venus. A naked woman stands upon a lily pond, a Cultural Revolution armband around each arm, and urinates into paradise. “It’s his take on Botticelli’s Venus,” says Raby. “It’s quite outrageous but it’s so beautifully executed.”

In Our Time: Four decades of art from China and beyond – the Geoff Raby Collection and Treasures of Dai Gum San: Chinese artistry from the Golden Dragon Museum are at the Bendigo Art Gallery until February 19, 2023.