But economic crisis management rather than policy change has dominated Perrottet’s stewardship of the state coffers. 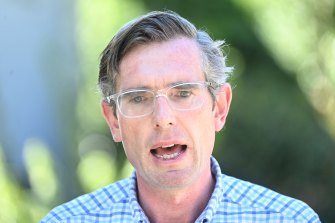 Perrottet claimed his first budget was “the envy of the Western world” but the financial crisis triggered by COVID-19 forced him to set aside the traditional Liberal Party playbook of surpluses and low debt.

The government has spent billions to support the economy during the pandemic and the state budget has slumped deep into the red. Perrottet now frames borrowing as an opportunity for the state because global interest rates are so low.

“When I look back at the past 12 months, I was taking an approach that runs against the grain in terms of the way my natural disposition would be,” Perrottet said in June.

But his hopes for reform have not been completely overshadowed – last year Perrottet unveiled plans to replace stamp duty with an annual property tax. If successful, the overhaul will be one of the biggest tax reforms in a generation.

Perrottet has enjoyed a political rocket ride since being elected to NSW Parliament as the member for Castle Hill in 2011, aged 28 (he has since shifted to the seats of Hawkesbury and then Epping). He was promoted to the front bench just three years later when was made minister for finance and services in the Baird government. When Gladys Berejiklian became Premier in January 2017, Perrottet was elected deputy leader of the Liberal Party and took on the Treasury portfolio.

But it has not all been plain sailing – Perrottet’s political career was almost derailed in 2020 over revelations of financial mismanagement and the underpayment of injured workers by public insurer icare, which was set up when he was finance minister.

His handling of the state’s budget has won widespread praise from the business community, but others are cautious about how his personal religious values could influence broader policy choices as premier.

Now endorsed as Berejiklian’s successor as Liberal leader, Perrottet, who turned 39 last month, will be the youngest person ever to become NSW premier.

Perrottet has been a strong advocate of privatisation, once describing the Coalition’s asset recycling strategy as “the golden key that unlocked the door of opportunity for NSW”.

As Treasurer, he has overseen several major deals, including the privatisation of the state’s land titles registry and the long-term lease of the giant WestConnex motorway.

Before politics, Perrottet was a solicitor at Henry Davis York Lawyers specialising in banking restructuring and insolvency law.

Perrottet is a father of six, himself one of 13 children. A leading member of the Liberal party’s right faction, he has been involved in politics since he joined the Young Liberals. He worked as a staffer for David Clarke, then as leader of the conservative right.