Labor leader Anthony Albanese has accused Prime Minister Scott Morrison of ignoring the separation between the government and the law by castigating the NSW Independent Commission Against Corruption as a “kangaroo court”.

Mr Morrison launched a ferocious attack on ICAC’s investigation into former NSW premier Gladys Berejiklian on Thursday after a push from Labor, the Greens and crossbench for Parliament to debate laws to establish a national anti-corruption body. 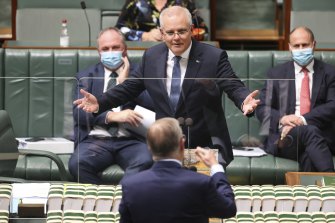 His Attorney-General, Michaelia Cash, refused on Friday to guarantee the government would introduce a bill to Parliament before the end of the year to establish such a commission, saying it was “a decision ultimately for the government”. Next week is the last parliamentary sitting week of the year.

The government first committed to create a national integrity commission in December 2018 but a set of proposed laws by former attorney-general Christian Porter were widely criticised as weak and a revised plan is being developed by Senator Cash.

Mr Morrison on Thursday told Parliament he would not meet demands from Labor about the federal integrity body because doing so would create a “kangaroo court” like the NSW commission.

Ms Berejiklian stepped down as NSW premier when it became public she was being investigated by ICAC, which is seeking to determine whether she allowed or encouraged corrupt conduct by then-Wagga Wagga MP Daryl Maguire. Ms Berejiklian and Mr Maguire were in an undisclosed relationship from 2015 to at least 2018, with contact continuing until 2020.

“What was done to Gladys Berejiklian, the people of NSW know, was an absolute disgrace,” Mr Morrison said on Thursday.

“And I’m not going to allow that sort of a process, which seeks to publicly humiliate people on matters that have nothing to do with the issues before such a commission, to see those powers abused and to seek to traduce the integrity of people like Gladys Berejiklian.”

“It was a declaration that the processes weren’t legitimate by the Prime Minister of Australia,” said Mr Albanese, who noted ICAC had been established by a Liberal government in 1988 and had rooted out serious corruption in the years since.

Ms Berejiklian has always denied that she did anything improper during her time in politics. ICAC has not concluded its investigation or made any findings against her.

Liberal backbencher Bridget Archer defied the government to support debate on a federal ICAC on Thursday but despite Labor, the Greens and crossbenchers from Bob Katter to Adam Bandt supporting the move, it was not successful because the coronavirus means too many MPs are absent from Canberra.