Ready for round three? A month after Ariana Grande teamed with Megan Thee Stallion and Doja Cat for the ‘34+35’ remix, the trio reunited for a music video that could’ve doubled as a sexy scene from ‘Bridgerton.’

It’s the sexy sleepover that everyone wants to attend, but only three names are on the guest list: Ariana Grande, Doja Cat, and Megan Thee Stallion. A month after coming together to remix Ariana’s “34+35,” the three reunited for a borderline NSFW music video, full of glitz, glamour, and enough lingerie to fill a Victoria’s Secret store. 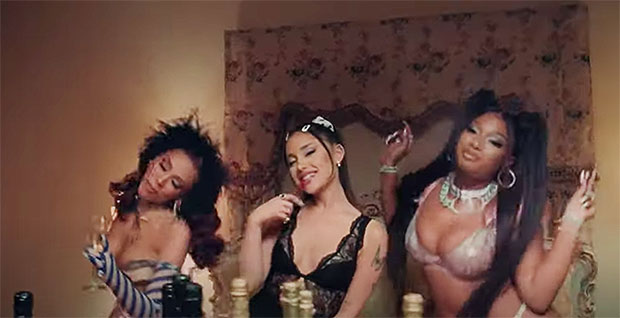 Throughout the video, the iconic trio wore lingerie looks that appeared to take inspiration from classical French baroque and rococo fashion. Of course, each artist gave the looks their own modern, flirty twist (Megan’s pigtails and heart print; Doja’s striped gloves with her lacy corset; Ariana’s Y2K hair clips and scrunchie with her black lace bodysuit).

Ariana first let everyone know the video was coming with a Feb. 9 tweet, one that also showed her lounging on a staircase while wearing a black, lacy number. To raise fans’ hype levels even more, she shared a snippet of the video two days later, one that showed all three ladies now on the staircase (and not a lot of clothing between them.) The video had a touch of a “fantasy sleepover” vibe, with a touch of the sexy trashiness you’d expect at West Village lingerie boutique.

Released on Jan. 15, the “34+35 (Remix)” retains the same spirit of the original, and adds a little bit of spice, courtesy of Doja’s verse.” Can we stay up all night? F-ck a jet lag,” she sings. “You bring your fine ass and overnight bag / Add up the numbers or get behind that /Play and rewind that, listen, you’ll find that / I want that six-nine without Tekashi.” Oddly enough, like Beetlejuice or Voldermort, 6ix9ine popped up shortly Doja said his name on this remix, sporting more tattoos and a scraggly beard while threatening to drop a new song. 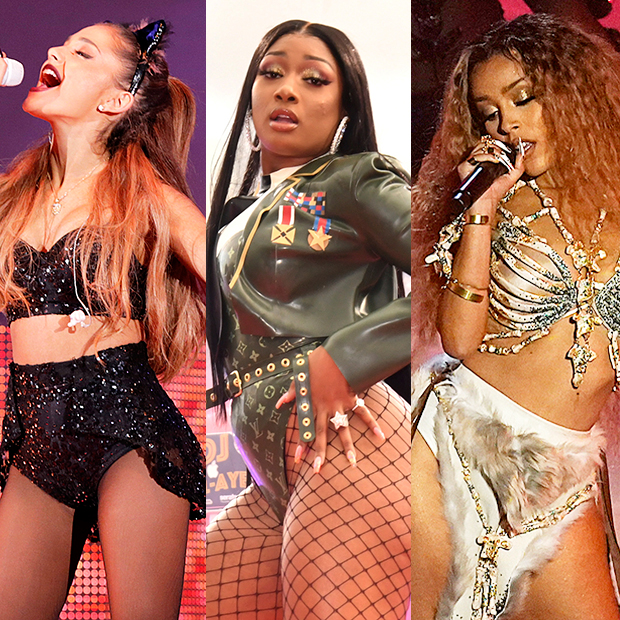 The original “34+35” was released as a single the same day Ariana dropped Positions, her sixth studio album. The track debuted at No. 8 on the Billboard Hot 100, and since then, it’s spent most of its time in the top-half of the chart. While Positions – both the album and the title track – debuted at the top of the Billboard 200 and Hot 100 charts, respectively, “34+35” has taken a while to pick up momentum. In the lead-up to the remix’s music video, it has been hovering towards the top of the Hot 100, but has been denied the top spot, thanks to Olivia Rodrigo’s “Drivers License.”

Ariana’s love of this “ridiculous” song was well-documented during her Oct. 2020 appearance on The Zach Sang Show.  After saying that the song was “so funny and stupid” and “absolutely absurd,” she detailed its creation. “We heard the strings that sounded so, like Disney and orchestral and full and pure. And I was just like, ‘Yo, what is the dirtiest possible, most opposing lyric that we could write to this.’ … [co-writer Scott Nicholson] wrote the ‘gimme them babies’ line, which is my favorite thing in the world… I was like, what comes after, ‘you might think I’m crazy / the way I’ve been cravin’ / I put it quite plainly,’ and Scott was like, ‘just gimme them babies!’ … It came up as a total joke, then, I fell in love with it.”