It’s never been a better time to be a stoic, and the stoics say we should lean into fate.

But during the pandemic it has often felt like fate is leaning into us, threatening to tip us over.

Now is one of those times.

NSW is neck-deep into a lockdown with no firm end date.

Victoria is dealing with twin outbreaks and has tightened mask restrictions. Its citizens stand at the bunker door, ready to retreat into lockdown at any moment.

Grandiose statements about political and national unity have given way to needless, contentious bickering between state and federal government, and between the states themselves.

Prime Minister Scott Morrison on Wednesday appeared to blame the immunisation experts he has made a virtue of relying upon for advice.

Queensland Premier Annastacia Palaszczuk, the border-shuttering queen, has given herself a leave pass to attend the Olympics in Japan.

Victorians cry foul that the federal government has offered a superior and timely financial support package to NSW, than it did them.

We will be guided by the experts, has been the catchcry, but when the experts are divided and the public is confused, it starts to feel like every man and woman for themselves.

Those lamenting the crisis in federalism may be heartened by the views of constitutional law professor Anne Twomey.

Her take is that the state-federal warring of the pandemic actually shows how effective our federal system is. It just doesn’t always feel that way. 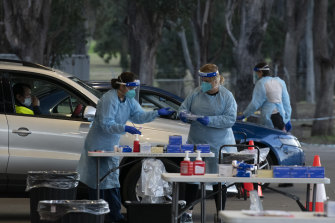 “Australia has benefited in having a federal system. The states stopped the spread by being able to close borders.

“When there were failures at Commonwealth level, the states stepped up to fill the gaps.”

This has been evident in quarantine, contact tracing, and the pursuit of an elimination strategy, Twomey says. The states led the Commonwealth on all three.

On quarantine, Twomey says, “the Commonwealth government were frozen in inaction and the states needed something to be done and the only way to do it was to do it themselves.”

Likewise, the federal government’s COVID-19 Safe app, which now seems like a cute footnote in the story of pandemic bunglings, was utterly out-classed by the QR code check-in system implemented by the states.

Each state can learn from the mistakes and successes of the other. They can share innovations and best practices.

“This notion that everything needs to be uniform, and it’s best you have one level of government doing it, I don’t buy that at all,” Twomey says.

“The notion of federalism is really, really useful.”

Professor Greg Dore is an infectious diseases physician and epidemiologist at the Kirby Institute of UNSW.

He says that while Australia’s elimination strategy has been wonderful and well-achieved, it fostered a complacency which is now biting us.

“This is a really crucial time,” Dore says.

“It does appear the Delta variant is considerably more infectious. That has changed the game. It does make sustaining an elimination strategy very difficult.”

Dore is horrified by the trashing of the AstraZeneca vaccine.

“The anti-AZ push – we will look back on this and be amazed at how we had been so negative about a safe and effective vaccine,” he says.

He calls it “the most baffling public health response I have ever seen”.

“We have been lazily plodding along in elimination mode, and ‘It’s not a race’, and even many in the medical profession not having that urgency.

“We have sat back and rested on our laurels.”

Professor Dore is still a proponent of elimination until there is high vaccine coverage.

He just laments that we don’t have that now.

“The main criticism for me is not the way [the federal government] chose the vaccines or negotiated the contracts, it’s the lack of urgency.”

Since February 2020, countless businesses have gone bust, but certain industries are thriving.

It’s good times for epidemiologists. Wonkish by nature, many would never have dared dream of celebrity when toiling in obscurity over a microscope in their early careers.

Some of them have embraced their measure of fame, some seem charmingly baffled by it.

They are on television so much we know what their studies look like.

We are all able to choose our favoured epidemiologist based on our risk profile and our politics. Also, we can judge their decor choices.

Then there are the armchair experts – here the media must take its share of shameful credit. Media coverage is surely to blame, in part, for the public’s reluctance to take up the AstraZeneca vaccine.

According to Professor Dore, the chance of dying from blood clots from the AstraZeneca vaccine is one in a million.

To put that into perspective, he says, if you woke every morning with a one in a million chance of dying, you would live for over a thousand years.

At an individual level, the risk of that vaccine has to be weighed against the impossible-to-calculate odds of a COVID-19 outbreak, your own chances of catching the virus, and your chance of dying.

But at a public health level, it’s a no-brainer – the more people vaccinated, the sooner we are back to normal(ish).

As with everything in the pandemic, it reverts to a contest of individualism versus collectivism. Whose side are you on?

Another industry boosted by the pandemic? Armed enforcement personnel.

Few police signed up wanting to enforce restrictions of liberty on their fellow citizens. Likewise, I don’t believe military personnel got a kick out of patrolling the streets of Melbourne and confining people to their houses.

But we must remind ourselves what we have gotten used to – the armed surveillance of our personal liberty by the state.

Men and women with guns policing where we walk, who we see, and what we wear.

It is necessary, sure, but it’s also necessary that it doesn’t go on for a minute longer than necessary.

In the early days of the pandemic, footage emerged from China of military sealing shut the apartment doors of civilians infected with the virus, trapping them inside.

The pandemic has also divided us by class. 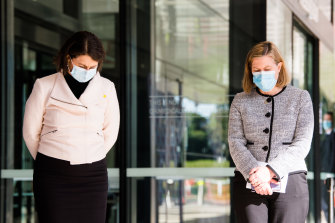 Just worked a 12-hour shift driving a cab? Didn’t earn much because the city is in lockdown? Now we need you to sit in a six-hour queue and get tested.

And let’s not forget the gender divide the pandemic has unhelpfully worsened.

Early on there were utopian dreams that flexible, home-based work would liberate us from gendered roles of caring and housework duties. Now that we’re all home, we could properly share that stuff, right?

Can you hear the hysterical laughter of Australia’s women ringing out in your ears? It’s the kind of crazed cackling that turns into jagged tears after a few seconds.

Every woman I know who is homeschooling is on the verge of something. Something not good.

The economy has always been powered by the unpaid and unsung caring work of (overwhelmingly) women.

Now that workers are forced to also homeschool, this bastard bargain is more blatant than ever.

But at a political level, there is zero acknowledgment of that.

At the very least, Premier Berejiklian should make a firm public call on employers to ease productivity requirements for any parent who is homeschooling while also working.

He says it is “crazy” to suggest we won’t go back to (mostly) normal once the population reaches a high level of vaccination.

“It will become another endemic respiratory virus,” he says. “It will be manageable.”

Professor Dore has a personal agenda. He has a teenage son.

“I want to get him back in the mosh pit,” he says.