Nine black people are strung up, hung by their necks, between two trees. For many Australians, such an image evokes the lynchings of the American south – what they don’t know is the same thing was done to Australian First Nations people during the frontier wars. 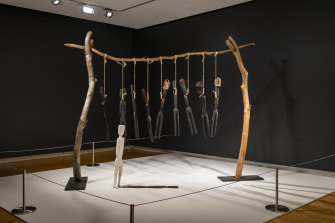 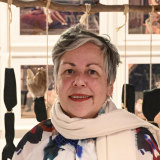 Artist Fiona Foley in front of her works at McClelland Gallery.Credit:Natalie Tuck

It’s one of Fiona Foley’s early works, Annihilation of the Blacks, created in 1986 when she was at art school, and is part of the survey exhibition Fiona Foley: Veiled Paradise, at McClelland Gallery. Curated by Angelina Hurley at the QUT Art Museum, the show traces Foley’s career over nearly four decades, showing an extraordinary body of work, at times confronting, beautiful, unsettling and captivating.

The piece is simple and devastating, a reference to a massacre that happened on Foley’s Badtjala Country on the Maryborough River, the story passed down through oral history from her mother to her. Colonial soldiers at the time of the massacre would suspend bodies up in trees as a warning to Indigenous survivors. In the foreground, a single white figure casts a long shadow, reflecting the long-lasting trauma inflicted by these colonial actions. Foley says the sculpture is the first monument by an Aboriginal artist to honour an Aboriginal massacre in Australia.

Foley’s work never shies away from tough issues. With truth-telling at its heart, she also explores the beauty of her Country, Indigenous language, the use of opium in Queensland and slavery.

“They used to kidnap Aboriginal children and make them domestics, the pearling industry in Queensland was [founded on] kidnapping men, women and children,” she said. “People don’t take the time to read the history.” 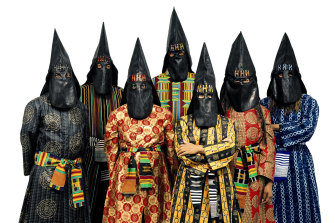 She has a huge interest in history and the frontier wars. “Associated with that is Aboriginal women’s sexuality and European men’s lust for Aboriginal women, historically,” she says.

Some of Foley’s best-known works are on display, including the striking photographic series HHH (Hedonistic Honky Haters), which draws parallels between American and Australian white supremacists and was created in New York.

The 57-year-old artist is also a lecturer at the Queensland College of Arts, Griffith University, where she did her PhD on Queensland’s legislation The Aboriginals Protection and Restriction of the Sale of Opium Act 1897. She is delighted with the exhibition and says it shows many different chapters of her life. “It’s wonderful to reflect on your progression.”

For her most recent series, The Magna Carta Tree, Foley recreated an opium den in an imagined version of what existed in Maryborough, where she was born. The series was shot in a beautiful old, semi-derelict building, the same one she used to create images for her film Out of the Sea Like A Cloud. It and three of her other films are screening at the McClelland show. 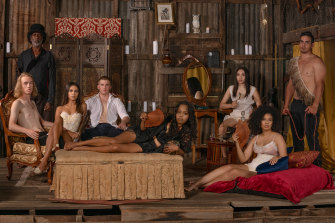 “These men are fraternising with the women, the interracial proclivities around opium-taking and sexual encounters, the underbelly of Maryborough. The reason they removed Aboriginal people was they said the women were infecting young white men,” she says, adding they moved 50 Maryborough people to Fraser Island, although none of this information is included in the current history of the town.

The author of Mary Poppins, Pamela Lyndon Travers, spent time briefly in Maryborough, where she is widely celebrated. “The traffic lights have images of Mary Poppins holding an umbrella, there’s a building a dedicated to her, a festival to [honour] her,” Foley says. “There’s nothing about the Badtjala people, how they were shot and killed in the streets.”

“Visually, I have tried to write our people back into the picture, to remind them that they have historical past that involves Aboriginal people.”

Fiona Foley: Veiled Paradise is at McClelland until October 9.