A backlash has begun against quotas in the NSW Liberal Party before they’ve even been adopted, with state party executive Alex Dore telling members quotas go against Liberal ideals and threaten the future of the party.

NSW Environment Minister Matt Kean, the leader of the state’s moderate Liberals faction, is going to take a proposal for quotas to the state executive and insist that half of the moderate candidates are women. Mr Kean said nothing else had worked to boost the number of women elected and it was clear quotas should be given a go. 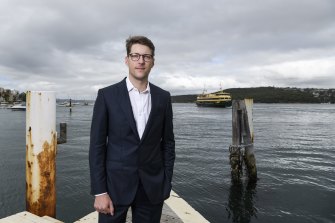 Liberal Party executive Alex Dore is urging colleagues to reject a push for quotas to boost the number of women elected.Credit:Rhett Wyman

Mr Dore, an aspiring candidate for Tony Abbott’s former seat of Warringah, has written to delegates to the state council urging them to reject the idea.

“These quota motions are an astounding betrayal of fundamental Liberal beliefs – in our unwavering belief in the power, potential and dignity of the individual, in equality of opportunity and in liberalism.

“It is no exaggeration to say that this is a battle for the very future of the Liberal Party,” he writes, in an email seen by The Sydney Morning Herald and The Age.

“If the quota motions are successful, there will be no mainstream political party in Australia left to stand against the dehumanising instruments of collectivism. Who will remain to fight against identity politics when even the party of the individual has abandoned it?

“Not only will this make us less competitive and worsen an already imperfect preselection system, it will also be the ultimate disrespect to voters.”

Mr Dore acknowledges the preselection processes for choosing candidates to run for election could be improved – noting “we don’t often meet these lofty ideals of meritocracy” – but says he will develop ideas over the next fortnight for “a merit-based alternative to collectivist quotas”.

In Victoria, a cross-factional group of Liberal members is also planning to put a motion backing quotas to that state’s party executive.

The moves come after Prime Minister Scott Morrison – once a NSW Liberals state director – said he had long been open to quotas and it was clear the “other way” of getting women elected for the Liberal party had not worked. Several of his ministers have also backed the idea.

A NSW Liberals spokesman said last week the party was already doing more to get women elected, pointing to the results of the previous federal and state elections where at least half the successful candidates were women.