Home » Lifestyle » Astrology fans, are you ready for the longest lunar eclipse of the century?

It’s official: the stars are not aligned for November 2021. In fact, they’ve shifted – which means your horoscope might not be what you think it is, apparently. On top of that, NASA has added a brand new zodiac sign into the mix. So, have the dates shifted on your star sign? Read on to find out…

After a year of retrogrades and transformations, this weekend brings another astrological throwdown: a full moon partial lunar eclipse.

Lasting around three and a half hours, experts say the eclipse, which starts at around 7.19am on Friday 19 November, will be the one of the longest partial lunar eclipses of the century. And, during it, only part of the moon’s visible surface moves into the dark part of the Earth’s shadow. But what does that mean for our stars?

Well, the full moon and lunar eclipse comes in the final days of Scorpio season, just before the arrival of Sagittarius on 22 November. It’s in the sign of Taurus, and is the first instalment in a series of eclipses that lasts into late 2023. Traditionally, eclipses have a bit of a bad rap. They’re known for turbulence, discomfort, and unexpected reveals. But, as astrologer Chani Nicholas explains, they also give us an opportunity to take stock of our life and world.

“With the first eclipse in Taurus this week, something’s at a breaking point. Maybe it’s time to power down and log off. Maybe a new life path feels impossible to ignore. Or maybe it’s time to hang out with your shadow self.

“Over the eclipse itself: rest, go dark, and let your schedule get eclipsed by as many naps or soaks as possible. Ground like it’s your full time job.”

The combination of the full moon and lunar eclipse is also pretty interesting. Full moons are commonly associated with endings and emotional release, but with the presence of the eclipse, that energy is heightened. This time around, we can expect to see shakeups in our romantic relationships, money, and self-worth.

“The day of the eclipse, Venus and Uranus retrograde will connect, adding financial and romantic erraticism to the overall energy,” explains Lisa Stardust.

“If you’re looking to have a different outlook on our deepest heartfelt emotions, then it will help us do that. Mostly, it’s asking us to decide what we want to invest our time and energy in. Is the effort worth the work? Or, is the juice worth the squeeze?”

And while Stardust warns of the possibility of “emotional havoc”, there’s always the chance of promising new beginnings.

“As long as we don’t resort to acting in extremities and find a calm centre, we can use this energy to implement growth,” she continues.

As it happens, November’s full moon, which is also known as a ‘blood’ moon because of the way the moon turns red during a lunar eclipse from sunlight passing through the Earth’s atmosphere, will naturally set us on the path towards completion and fulfilment.

As moonologist and bestselling author Yasmin Boland explains: “This is the peak time of the lunar cycle, and it is at this point that you should take a moment to see what’s happened in the last two weeks and check in with your intentions.”

Sounds brilliant, right? And yet…

The new Moon in Libra occurs on 6 October, and encourages taking a balanced approach to new endeavors. Don’t jump in to anything too fast.

Well, astrology, on the surface, may be based on the position of the sun relative to certain constellations – and it may be influenced by the movements of the sun, moon, planets and stars, too. However, is is absolutely not considered to be a ‘science’. Indeed, it’s been wholeheartedly rejected by the scientific community – with many pointing out that astrological predictions are too general, too unspecific to be subjected to scientific testing.

Despite this, there are many people who put great stock in what their horoscope says each morning. They carefully scan the pages of their morning newspaper, searching for their own zodiac sign, and drink in everything that the astrologer has written for them that day. Even after the thoroughly unpredictable events of the last 12 months!

As reported on 24 July 2020: Even those of us who dismiss astrology as a load of absolute nonsense know which star sign we are. And we’ve probably read our horoscope (with a healthy dose of cynicism, of course) at least once. Or have we?

Because, as you’ve no doubt read already, it was recently revealed that everything we thought we knew about the zodiac was a lie. In fact, a massive 86% of us were actually born under a different constellation to our star sign, based on how the sky exists today… and it’s all to do with the “Earth’s wobble“.

NASA – as in, yes, actual NASA – have confirmed that the sky today is completely different to how it was almost 3,000 years ago, when the Babylonians first invented the 12 signs of the zodiac.

They explained: “The sky has shifted because Earth’s axis (North Pole) doesn’t point in quite the same direction. Now Mimi’s August 4 birthday would mean she was born ‘under the sign’ of Cancer (one constellation ‘earlier’), not Leo.”

Essentially, they reckon that the stars have shifted, we’ve been reading the wrong horoscope all this time, and there’s a new star sign – Ophiuchus – in the mix (more on that later).

However, astrologers have a word of warning to all those frantically casting the old zodiac aside.

Pauline Gerosa, the consultant astrologer behind Astrology Oracle, tells me: “Ophiuchus has always been one of the constellations that fall along the ecliptic. It just wasn’t selected by the ancient astrologers to be one of the 12 zodiac signs.”

When I ask her if NASA’s comments about shifting stars has any impact on the zodiac signs, Gerosa explains: “[The shift] is due to the precession of the equinoxes. The constellations have not shifted, the wobble of the earth’s axis creates the impression that they have. Eastern astrology (sidereal) reads the planets against the current view of the constellations. Western astrology (tropical) sticks with the unchanging positions and accounts for the apparent shift via the great ages (around 2,500 years in each sign). Hence the move from Age of Pisces to the Age of Aquarius.”

“It’s important to remember that astrology is NOT astronomy,” she adds. “Astronomy is a scientific concept based on 3D material reality. Astrology is a symbolic language, a philosophy, a multidimensional concept. They used to be seen as two sides of the same coin and hopefully they will be again.”

The skies have shifted, say NASA, and the zodiac signs have moved, too.

As reported in 2016: If Gerosa’s words haven’t stopped you from struggling to make sense of NASA’s bombshell, don’t despair: it’s all very simple when you break it down.

Essentially, the date that fixes our star sign corresponds to the position of the Sun relative to constellations of stars appearing behind the Sun on our birth date.

The position of the Sun as it’s perceived from the revolving Earth passes through the constellations that formed the zodiac – Aries, Taurus, Gemini, Cancer, Leo, Virgo, Libra, Scorpio, Sagittarius, Capricorn, Aquarius and Pisces. Zodiac signs were originally determined by which constellation the Sun was ‘in’ on the day we were born. But in the more than 3000 years since our zodiac system was invented, constellations have drifted and the sky has changed.

So while we might consider ourselves to be a well-balanced Libra, or a headstrong Aries, or a “total Gemini”, that is most likely not the case. On the other hand, all of those who feel as if they just don’t connect with their own horoscope (we’re thinking of you, Scorpios), then this could be very good news indeed.

Even stranger, however, is the fact that NASA has added a brand-new 13th zodiac sign into the mix: Ophiuchus.

“The constellations are different sizes and shapes, so the Sun spends different lengths of time lined up with each one,” a spokesperson explained.

“The line from Earth through the Sun points to Virgo for 45 days, but it points to Scorpius for only 7 days. To make a tidy match with their 12-month calendar, the Babylonians ignored the fact that the Sun actually moves through 13 constellations, not 12.

“Then they assigned each of those 12 constellations equal amounts of time. Besides the 12 familiar constellations of the zodiac, the Sun is also aligned with Ophiuchus for about 18 days each year.”

The constellation, which comes from Greek words meaning “serpent bearing” is commonly represented by a man wrestling a snake.

Unsurprisingly, Ophiuchus shares many of the same characteristics as Sagittarius, and people with its sign are described as healers and light-bearers.

However, astrologers have a word of caution for all those assuming their star sign has changed. 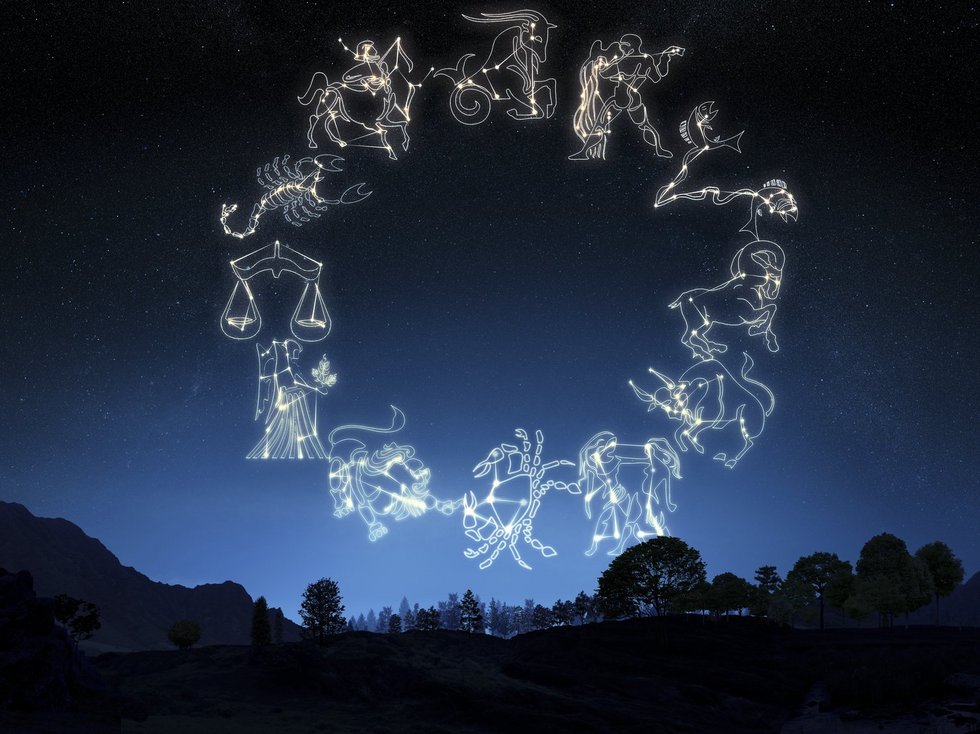 There are now 13 zodiac signs.

Here are the correct dates for the star signs:

The BBC previously speculated that ancient astrologers perhaps ignored Ophiuchus because they wanted to chart the 360 degree path of the Sun in a mathematically pleasing way of 12 equal parts, each one of 30 degrees. Whatever the reason, the unfamiliar constellation represents a man wrestling a serpent, dividing the snake’s body in two parts.

As such, Ophiuchus is considered a healer of men, a doctor of medicine, or a scientist who seeks higher education and enlightenment.  He’s also an interpreter of dreams, favoured by his father and other authority figures, and expected to achieve a high position in life.

Not too shabby, eh?

If you’re still not sure that your personality fits your new star sign, of course, it doesn’t matter too much; after all, there’s nobody to stop you reading your old horoscope.

As NASA themselves explain, no one has shown that astrology can be used to predict the future or describe what people are like based only on their birth date.”

They add that the zodiac is “not science” and that it simply offers comfort in a similar manner to “reading fantasy stories”.

This article was originally published in 2016, but has been updated throughout to ensure all information is correct.