Former prime minister Scott Morrison let the cat out of the bag on his refugee policy on the day of the federal election. For almost a decade, when critics suggested his policies on stopping the boats and offshore detention were taken to extremes as a way of wedging the ALP and playing to the far right, he insisted his sole concern was keeping our borders safe. Yet on election day in May, it has now been confirmed, Morrison used border policy to play the most cynical and hypocritical politics.

He had for almost a decade followed a strict policy of refusing to give out timely information on Operation Sovereign Borders and his tactics to turn back boats carrying asylum seekers. But a report by Home Affairs Department secretary Michael Pezzullo on Friday confirmed that Morrison’s office pressured the department to leak to selected journalists the story of an ongoing turn-back of a boat from Sri Lanka. 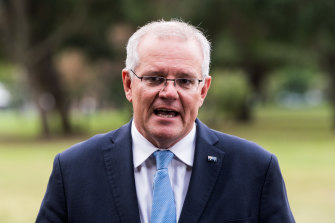 The Liberal Party then sent text messages to voters as they went to the polls in the federal election and Morrison called a press conference claiming the boat was a harbinger of what would happen if Labor won.

The tawdry scheme broke the caretaker convention which restricts what governments can ask of public servants during elections, and by publishing information about an operation while it was ongoing, the government also could have jeopardised the operation and endangered lives. It seems Morrison only kept “on-water matters” secret when it suited him.

The incident is an unprincipled coda to Morrison’s prime ministership, but the broader question is whether the Coalition was being equally cynical and political in other aspects of its border policies.

There is no question that Australia must maintain the essential policy of turning back the boats and deterring new boat arrivals, but the Morrison government’s stance in regard to the tens of thousands of asylum seekers who reached Australia before that policy was imposed has been unnecessarily cruel. They have been trapped in limbo either in offshore detention, in detention in Australia or on temporary protection visas here.

The Coalition insisted that showing compassion would invite a new wave of boat arrivals. This argument was always questionable. Many saw it as an example of the Coalition government’s wedge politics, painting any expression of compassion as a vote for people smugglers.

For instance, the Coalition tried to block sick refugees and asylum seekers from coming to Australia from Manus Island and Nauru for medical treatment. When it was forced to bring them here, the government kept them locked up in hotels for years, rather than release them into the community. When it finally did release people, it was without any explanation or apparent plan.

The hotel policy was cruel and also expensive. A court challenge to this practice by Kurdish refugee Mostafa Azimitabar heard last week that the government was spending $3 million a month on one of dozens of hotels used for immigration detention.

With his decision to allow the Nadesalingam family (formerly known as the Murugappans) to return to their home in Biloela, Queensland, while they await the outcome of an appeal over their asylum claim, Prime Minister Anthony Albanese signalled he is planning to end this performative cruelty. He has also promised to offer permanent visas to 19,000 people already recognised as refugees but who have lived in limbo for years on temporary visas with limited rights.

It is time for Australia to move beyond the hyper-partisan debate over refugees and formulate policies that deter new boat arrivals while showing compassion to those who have come here looking for safety.

Gay Alcorn sends a newsletter to subscribers each week. Sign up to receive her Note from the Editor.