As billions of taxpayer dollars are spent on the recovery from the pandemic, scrutiny on how the government spends that money will slowly increase with the Auditor-General receiving more funds.

The budget contained an extra $61.5 million over four years for the Australian National Audit Office, broadly in line with what Auditor-General Grant Hehir asked for amid dire warnings about his ability to maintain scrutiny of government programs. 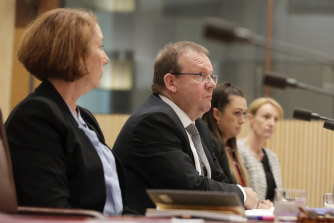 Auditor-General Grant Hehir, centre, will be able to add 52 staff to the audit office after receiving a funding increase.Credit:Alex Ellinghausen

The extra money will allow him to take on 52 new staff over the coming year and gradually examine more government programs.

The audit office has become the default Commonwealth integrity watchdog with recent investigations uncovering scandals including the sports rorts grants and the $33 million purchase of land near Western Sydney airport later valued at just $3 million.

Mr Hehir warned the Parliament the cuts had squeezed his staff so much he had to slash the number of performance audits – the checks on how government programs are working and whether taxpayer money is being used appropriately – from the historical average of 48 down to 36. The performance audit team had lost 20 staff over the past year.

He also warned that auditors were tolerating “uncomfortable” risks in financial statements as they became more complex and numerous.

Mr Hehir asked the government to give him an extra $41.4 million over four years to deal with existing cost pressures and allow the ANAO to return to 48 audits a year.

He also asked for another $30.7 million over five years to do new mandated audits of departmental performance statements.

Its chair, Liberal MP Lucy Wicks, said it was important that funding increase as soon as possible and urged the government to add more beyond this year’s budget.

“The committee considers that there are opportunities to provide for a more sustainable, ongoing funding model to avoid regular returns to the government,” she said.

“We’ve had eight years of cut after cut to the auditor-general’s budget,” he said. “It’s outrageous that we had to reach a crisis situation with public and media outcry for the government to act.”