All Australian troops in Afghanistan are set to leave the country by September after United States President Joe Biden announced an end to the 20-year war.

The US President decided to leave American troops in Afghanistan beyond the May 1 deadline negotiated between the Taliban and the Trump administration, but has instead set the 20th anniversary of the September 11 terror attacks as the new withdrawal date. 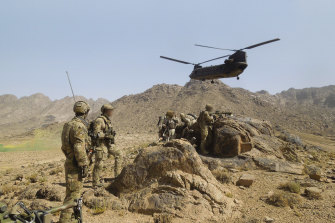 Australia currently only has about 80 soldiers left in Afghanistan, according to the Australian Defence Force’s website.

A Defence spokesperson said any decisions around Australia’s contribution in Afghanistan “will be made in close coordination with the government of Afghanistan, the United States and our other partners”.

“Australia does not comment on coalition partner involvement in Afghanistan, or matters related to the decisions of other governments,” the Defence spokesperson said.

Senior government sources confirmed Australia would pull out its troops along with the US, and could do so earlier than the September deadline.

Michael Shoebridge, director of the Australian Strategic Policy Institute’s defence program, said Australia had clearly made a decision to withdraw from the campaign.

“Everybody else is going to go. Biden has done what both Obama and Trump wanted to do – and that’s get a plan for a total US and partner withdrawal from Afghanistan,” he said.

Mr Shoebridge said Mr Biden’s announcement was an “emphatic statement” of the US’s re-ordering its priorities to Asia to deal with a rising and more assertive China.

“Trump was doing a unilateral approach, while Obama kept taking advice that it had to be conditions-based.

“You can’t say you are shifting priorities, without stopping doing something. This is Biden saying the 9/11 counter-terrorism era is over, and the era of strategic competition is here. So he is actually putting flesh on the bones of what he has been saying his priorities are.”

Mr Shoebridge said the early phase of the Afghanistan conflict was worth it because the Taliban was giving shelter to Al-Qaeda which was clearly the start of a new global terrorist phenomenon. But he said there was “mission-shift” and it became unclear what the objective was in staying in the country.

“The Afghanistan objectives became very mixed – was it about counter-terrorism, or creating a political future in Afghanistan to ensure it was free from the Taliban, or was it a broader nation-building mission? The mission became very muddy over time.”

Announcing his plan in a speech at the White House speech on Wednesday, Mr Biden said there was little justification for the US staying in Afghanistan, adding it was time to end the “forever war”.

“I am now the fourth American president to preside over an American troop presence in Afghanistan. Two Republicans. Two Democrats,” Mr Biden said.

Prime Minister Scott Morrison on Wednesday confirmed Australia had been discussing plans to withdraw from Afghanistan with allies including the US.

“Without going into national security matters you can be assured that the Australian government has been working closely with our American partners and allies on these issues,” Mr Morrison said.