A devoted mother who has been fighting for 15 years to have her autistic son released from hospital has told of her joy that he is finally coming home – and claimed asking for support was ‘the worst mistake she ever made’.

Despite never having committed a crime, Ryan Addison, 32, has been detained in mental health units since 2006, alongside some of the most dangerous criminals in the country, after being voluntarily admitted.

In desperation, his devoted mother Sharon Clarke, originally from Hull but now living in Doncaster, turned to lawyers to look into his treatment.

In May 2019 Health Secretary Matt Hancock announced an independent review of patients in segregation and the care they received.

Sharon is now celebrating after Ryan was allowed home for the first time in over a decade to celebrate his birthday. He will also be moving into his own accommodation later this year. 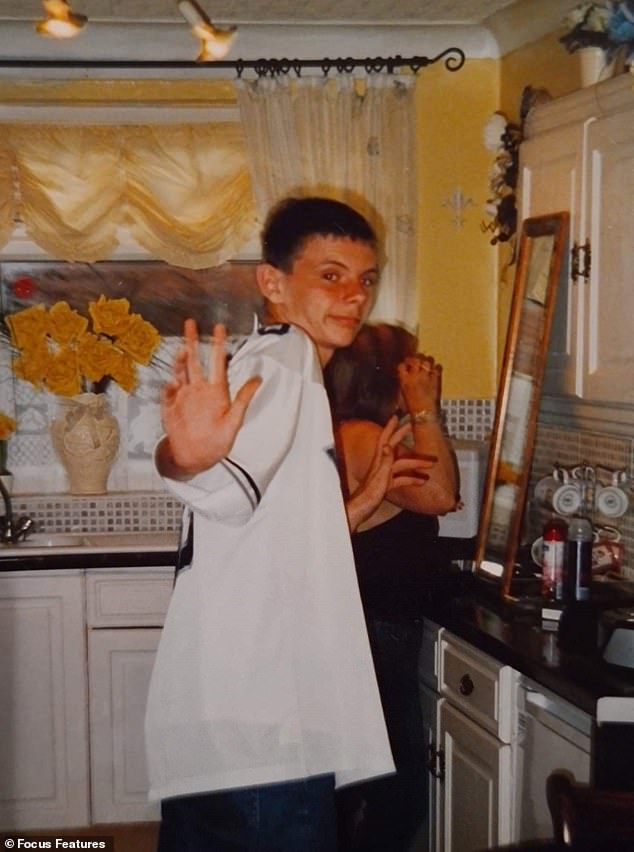 Despite have never committed a crime, Ryan Addison, 32, has been detained in mental health units since 2006. He is pictured at the age of 17 before being voluntarily admitted into a psychiatric unit 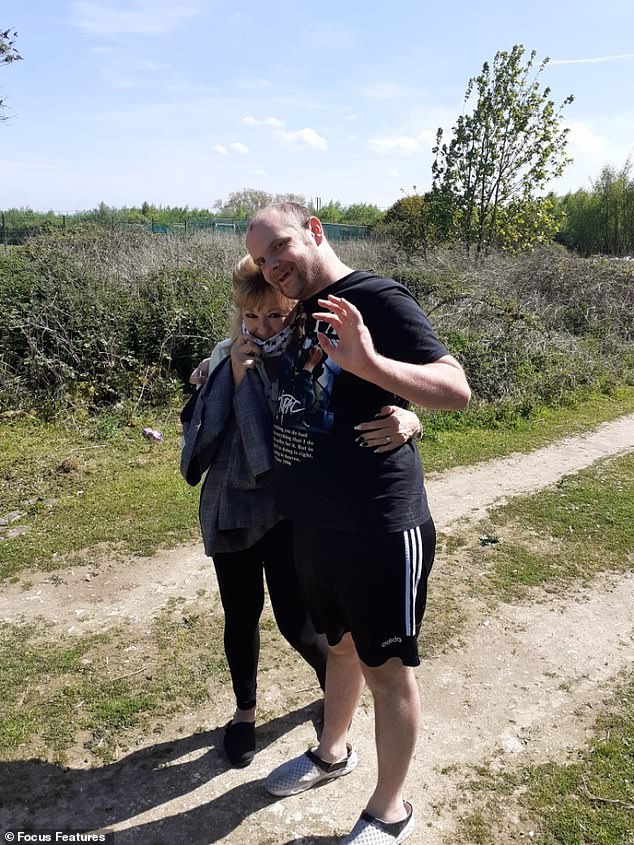 Ryan’s mother Sharon Clarke, 62, has been fighting to have her autistic son released from hospital. The mother and son are pictured celebrating Ryan’s 32nd birthday this year

But his story, coming on the 10th anniversary of the Winterbourne View scandal, which exposed physical and psychological abuse suffered by people with learning difficulties, raises many concerning questions.

Sharon believes that if it were not for her constant campaigning, her son would have been left in the Humber Unit in Hull for years to come.

Mother of three Sharon, 62, told FEMAIL: ‘Ryan became depressed as a teenager. Naively, I thought that by seeking medical help, he’d get the support he needed.

‘In fact, it was the worst mistake I ever made. I wish I’d never made that call because it triggered the start of a 15-year battle to bring my son back home.’

As a child, Ryan was affectionate and mischievous, and reached all his expected milestones. He was inquisitive and loved to see how things worked. 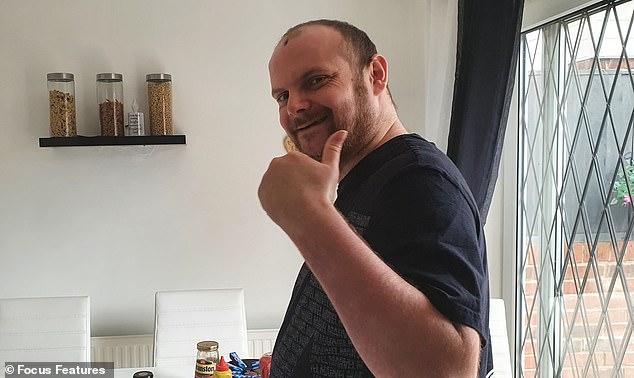 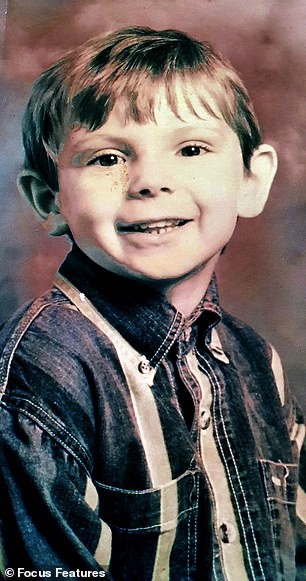 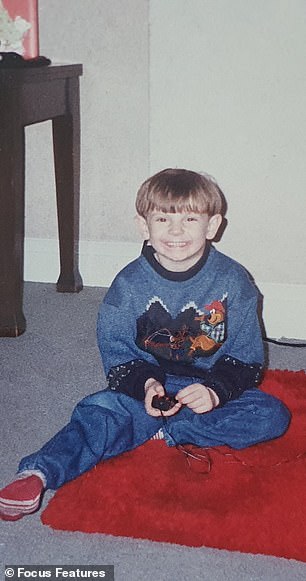 Ryan, pictured left at four, right at six, was an affectionate and mischievous child, and reached all his expected milestones

Sharon said: ‘He was a really caring boy. He had a little friend who was physically disabled, and he really looked after her. He loved animals too.’

But she soon noticed Ryan relied heavily on routine and had a habit of flapping his hands.

Sharon recallss: ‘We walked to school, and if I deviated at all from our usual route, he would throw a tantrum. I just thought he was being difficult.

‘He found it difficult to understand the concept of things happening in the future; if we were planning a holiday, he couldn’t wait. Again, he’d throw a tantrum. But I thought he’d grow out of it.

‘He was the baby of the family, and his two older sisters made a fuss of him, so I thought he was a bit spoilt.’ 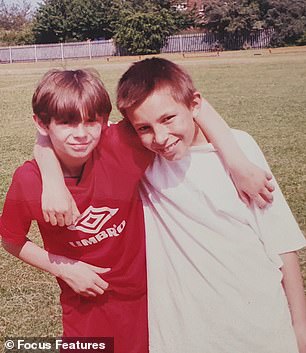 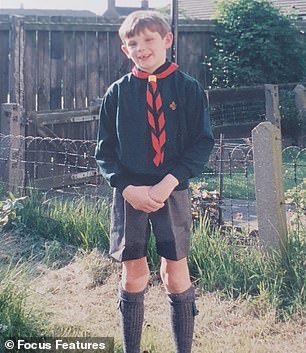 As he grew older, Ryan struggled with friendships, particularly in large groups, but he had best friends and attended mainstream schools and there were no concerns about his development. Left, Ryan at 11 with best pal Jozzy. Right, Ryan at age eight 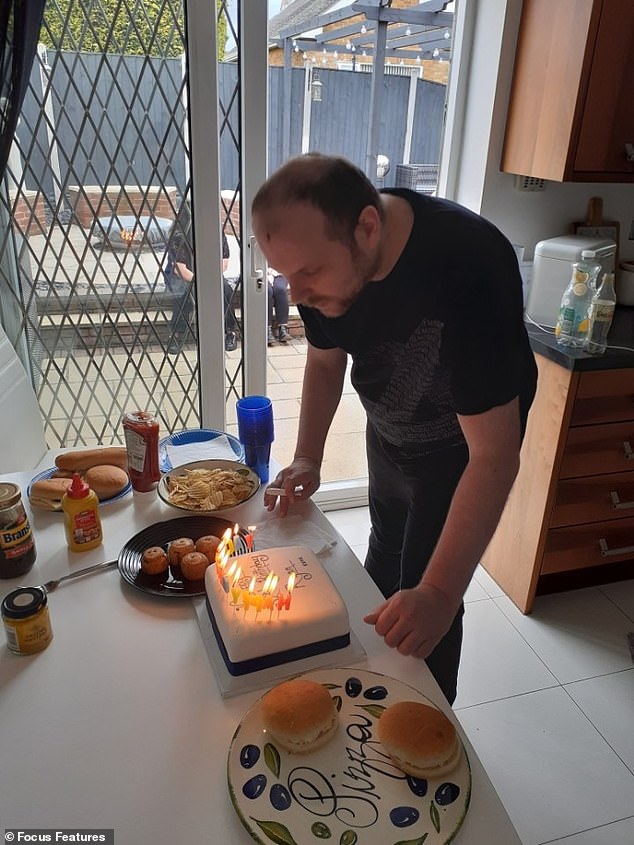 Last month, Ryan was allowed home for the first time in years to celebrate his 32nd birthday. He is pictured blowing out his candles at the celebration

As he grew older, Ryan struggled with friendships, particularly in large groups, but he had best friends, Jozzy and Leslie. He attended mainstream schools and there were no concerns about his development.

At 16, Ryan began experiencing anxiety. Sharon explained: ‘At Christmas, Ryan burst into tears at the sight of wrapped presents, because he was frightened of surprises. He wasn’t coping too well.

‘We saw the GP and Ryan was referred for counselling through the community mental health team.’

In 2006, aged 17, Ryan split with his girlfriend of 18 months and tried to slit his wrists in the family bathroom. His wounds were superficial, but Sharon called the Crisis Team and pleaded for help. Ryan was voluntarily admitted into a psychiatric unit. 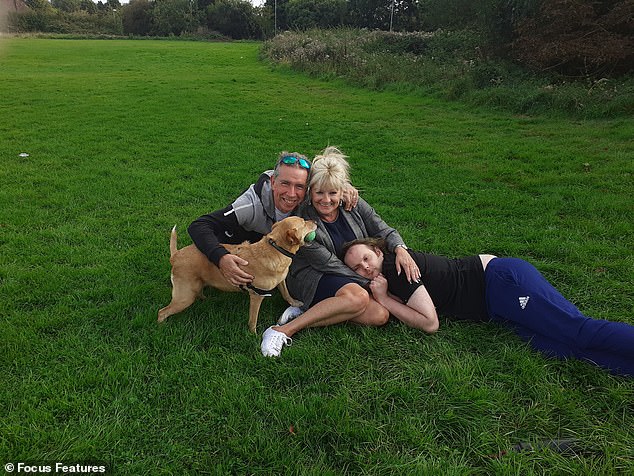 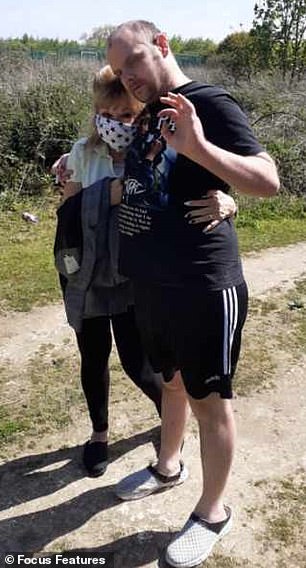 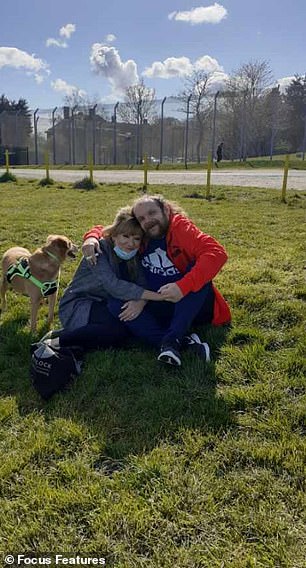 Sharon, pictured celebrating her son’s 32nd birthday, says that it ‘won’t be easy’ when Ryan goes into supported living, but insists that she ‘just can’t wait’ 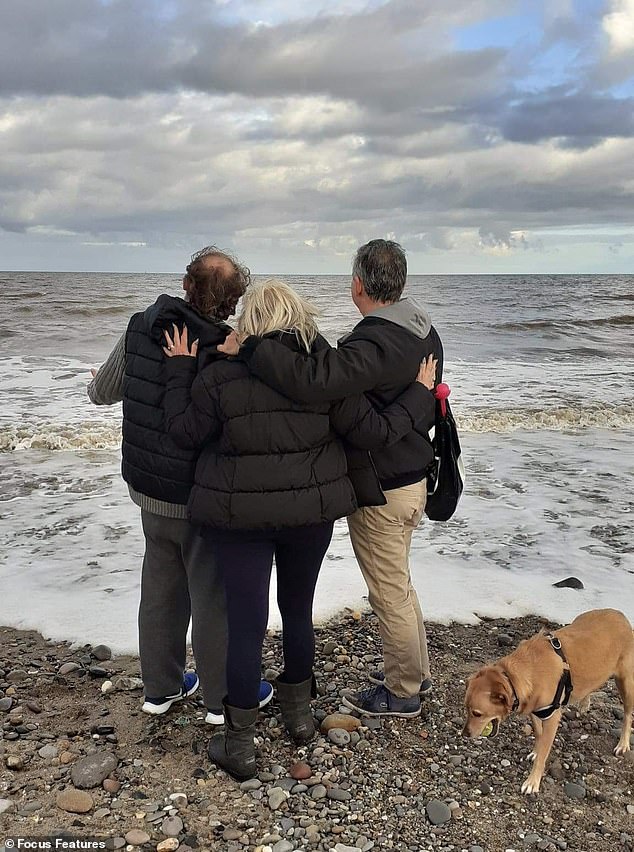 ‘It’s near our family home so I will be able to support him and see him every day. It’s like a dream come true’, says Sharon. She is pictured with Peter and Ryan on his 32nd birthday

Sharon says: ‘Naively, I thought that by calling the Crisis Team I’d be able to get the support he needed. In fact, it was the worst mistake I ever made.

‘I wish I’d never made that call because it triggered the start of a 15 year battle to bring my son back home.’

Ryan spent six months in a residential unit. Sharon said: ‘At the time, I thought he was in the best place. I was worried about Ryan and I wanted him to get better. I thought it was the right thing for him to stay in there. I know now how wrong that was.’

The Winterbourne View home in Gloucestershire was shut and staff were jailed after years of systematic abuse which saw vulnerable patients beaten, humiliated and force-fed drugs.

The authorities had repeatedly failed to act on warnings about ‘inhumane and hate-fuelled treatment’ of vulnerable patients with mental health problems.

Panorama sent in an undercover journalist who filmed staff slapping residents and pulling their hair, soaking them in water, trapping them under chairs and taunting and swearing at them. The programme decided to film covertly after being approached by a former nurse at the hospital who was deeply concerned about the behaviour of some of its support workers.

Posing as a care worker, reporter Joe Casey recorded footage of residents being slapped, soaked in water, trapped under chairs, taunted, sworn at and having their hair pulled and eyes poked. 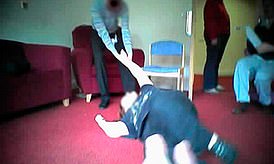 Staff laughed as one victim had soap squirted in her face and mouth wash forced into her eyes.

Nine support workers and two nurses operated in ‘groups’, humiliating the young adult patients who they regarded as ‘playthings’.

Castlebeck Care, the owner of the 26-bed hospital with a turnover of £3.7million, was paid an average of £3,500 a week for each patient. Arrests were made only after video of mistreatment was broadcast by the BBC programme in May 2011.

Six members of staff were jailed for their part in the institutional abuse and given sentences ranging from two years to six months, while another five workers escaped with suspended sentences.

Judge Neil Ford QC, the Recorder of Bristol, described Winterbourne View as an ‘institution in which systematic abuse’ of vulnerable people took place.

He said: ‘The hospital was run with a view to profit and with a scandalous lack of regard to the interests of its residents and staff. A culture of ill-treatment developed and, as is often the case, cruelty bred cruelty. This culture corrupted and debased, to varying degrees, the defendants.’

The home at Hambrook, South Gloucestershire, was closed in the wake of the scandal and the judge praised the TV investigator for stopping ‘systematic abuse’.

Sharon says: ‘I started to get worried, and I kept asking for Ryan to come home. The staff told me he was in the best place and that he was progressing well. He was diagnosed with schizophrenia – which later changed – and given anti-psychotic medication. He lost 18 teeth due to the medication.

‘He became very depressed when his medication was changed, and that was the trigger for his next move.’

Ryan, who also has mild learning difficulties, was then sectioned without his family’s knowledge and moved to various forensic psychiatric units. He was housed alongside dangerous criminals, despite having never committed a crime.

One of the units, in Manchester, was a two-hour drive from Sharon’s home.

She says: ‘The first time I visited, I was horrified. It was like going into a prison. I couldn’t take my mobile phone in or my handbag.

‘I never missed a visit, and my whole life revolved around trying to get Ryan home. I wasn’t allowed to see where he ate or slept. All the visits had to be in a social room.

‘My older daughters settled down and had families. It felt like Ryan was frozen in time, locked away, for no reason at all. I became very frightened for him.

‘Ryan was understandably anxious and tearful. It broke my heart each time I saw him. He became increasingly withdrawn and quiet.’

Five years ago, Ryan was moved into another secure unit in Hull, East Yorkshire, where Sharon says he spent some time in segregation.

Sharon says: ‘For me, the segregation was completely inhuman. It was the equivalent of solitary confinement.

‘When I arrived for visits, having made a long journey, I was told the visit had been unexpectedly cancelled. The system turned on me.’

Sharon became so concerned about Ryan’s situation – and the lack of communication from the hospital – that she sought legal action.

In 2018, at the age of 28, his diagnosis of schizophrenia was changed to autism. Sharon has since received support from the National Autistic Society.

Last month, Ryan was allowed home for the first time in years, to celebrate his 32nd birthday.

Sharon says: ‘I haven’t seen Ryan on his birthday for years. It was so emotional. Ryan was stunned when he saw our Alexa smart speaker– he was blown away by the technology.

‘We’ve been told Ryan will be released later this year into supported living. It won’t be easy because he has become totally institutionalised, but I just can’t wait.

‘It’s near our family home so I will be able to support him and see him every day. It’s like a dream come true.

‘I do understand that serious offenders need treatment, but non-offenders should not be locked up alongside them. Ryan’s only “crime” is to be autistic and there are others suffering, all around the country, just like him.

‘My son has spent half of his life locked up in hospital – for no reason at all. But now, he finally has a future to look forward to.’

The Humber Teaching NHS Foundation Trust said last year it is working on providing Ryan with a suitable care package.

A spokesman said: ‘Providing the best possible care and experience for our patients is at the heart of all we do.

‘We aim to ensure we are able to provide Ryan with a future place in the community, and level of care, which is suitable for him. Above all, we want him to live a full and active life out of hospital.

‘The recommendations of all Independent Care and Treatment Reviews are implemented as appropriate and changes required are made in a timely way to address any issues raised.’