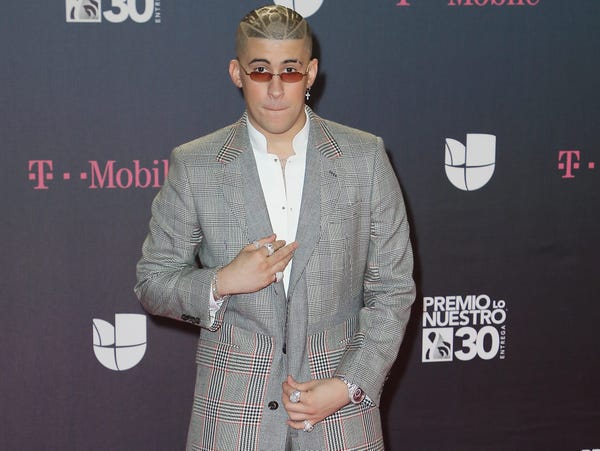 Bad Bunny's collaboration with Crocs sold out within 30 minutes after launching on Tuesday.

The Puerto Rican rapper and singer partnered with Crocs to launch a pair of glow-in-the-dark clogs in two different colors, as well as Jibbitz charms inspired by his most recent album, "YHLQMDLG," which was released in February.

The acronym stands for "Yo hago lo que me da la gana," which is Spanish for "I Do Whatever I Want."

We appreciate everyone SHOWING UP today and congrats to those that scored a pair. For those who didn't, stay tuned for many more surprises to come in Croctober 🔥 P.S. We don't like bots either, which is why we use a combination of a queuing system and other fraud protection measures to protect against them. @badbunnypr

The limited-edition clogs retailed for $60 and were available starting Tuesday at 12 p.m. ET on Croc's website and FinishLine.

At the time of writing, the clogs had sold out, and FinishLine's website appeared to be down. Just a few minutes after launching, Crocs let fans know by adding a note to its Instagram post captions: "UPDATE: This collaboration has sold out. Thank you!"

The brand also updated its Bad BunnyXCrocs webpage to announce that the shoes were no longer available.

Representatives for Crocs and FinishLine did not immediately respond to Insider's requests for comment.

Fans of Bad Bunny shared their reactions to the rapper's Crocs designs via Twitter, with some tweeting how excited they were to get in the virtual line to purchase the shoes.

Minutes later, fans took to Twitter again to express disappointment that the clogs had sold out.

In a press release shared with Insider, Bad Bunny expressed his love of Crocs shoes.

"I believe in being true and not placing limitations on myself, which is also something Crocs represents, and this is the message I always want to make sure I send out to my fans," he stated.

"As a longtime fan, creating my own design for Crocs was a lot of fun. I hope they inspire others to have their own fun with their personal style and wearing what makes them happy," the musician added.