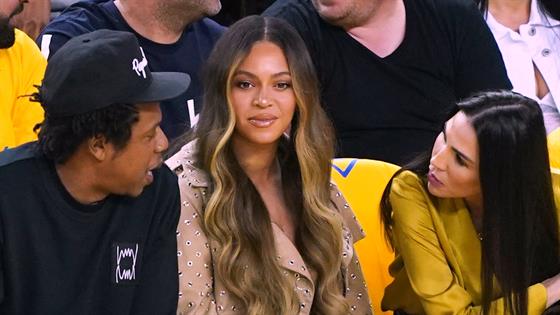 Hold up, Beyhive! It’s time to let up on your sting.

As fans are well aware, Beyoncé made headlines yesterday after she was caught giving the wife of the Golden State Warriors owner some serious side-eye for leaning over her at Wednesday’s game to talk to Jay-Z The woman, Nicole Curran, soon felt the wrath of the singer’s fans, who were quick to defend their queen. Now, Beyoncé’s publicist, Yvette Noel-Schure, is speaking out about the hate.

“I am looking back today at the start of The OTRII tour, one year ago,” she wrote alongside a photo of Bey and Jay from the concert series. “It was a place of joy, unimaginable entertainment from two of the best performers in the world, and a place of love. Every single day on that tour I saw love. Which is why I also want to speak here to the beautiful BeyHiVE. I know your love runs deep but that love has to be given to every human. It will bring no joy to the person you love so much if you spew hate in her name. We love you.”

Curran, who has reportedly received death threats over the incident and deleted her Instagram account, also addressed Beyoncé’s fan base on Thursday and assured them she meant no harm.

“Listen Beehive,” she commented on a picture, according to The Shade Room. “I respect Queen B. I love her! I talked to her husband twice tonight. First, to take a drink order for them both when they arrived as they were our guests. Second, to explain why I gave his wife a rose from a fan. All of this has been taken out of context. I am a happily married woman. Telling me to kill myself?????? Somehow I don’t think she would support this.”

In addition, she posted a picture of herself in which she appears to be fixing the “Formation” artist’s hair.

“We should all help and support each other,” she captioned the shot.

Curran also opened up about the hate she has received during an interview with ESPN.

Now, it looks Beyoncé wants to put an end to all the drama.