The NSW Land and Environment Court has upheld a decision by the state’s Independent Planning Commission to reject a controversial coal mine planned for rich farmland north-west of Sydney.

Korean energy giant KEPCO had been seeking to overturn the decision in September 2019 to reject a proposed coal mine for the Bylong Valley because of “long-lasting environmental, agricultural and heritage impacts”. 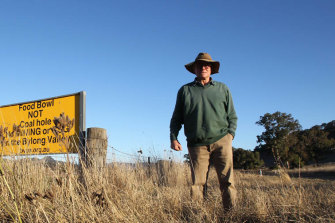 Third-generation farmer Peter Grieve, whose farm is in the Bylong Valley, is among those opposed to plans for a coal mine in his region.Credit:Peter Rae

The court’s decision to dismiss the appeal was welcomed by farmers and other groups opposed to a new open-cut mine in the farming region near Mudgee.

The Bylong Valley Protection Alliance – set up by the local community – had to step in to defend the decision in court after the commission opted not to back its own verdict.

“This court decision reaffirms what we locals always knew – that the IPC was right when it ruled the agricultural values of this valley are too precious to sacrifice for the sake of a temporary, destructive coal mine,” Phillip Kennedy, the alliance’s president, said.

“The soils in this valley are classed as the top 3.5 per cent in the state. There’s no way it should ever have been made available for mining by the government.”

A spokesman for KEPCO Bylong said the company was “very disappointed that the court did not find in favour of the project and the strong case it made for overturning the refusal by the [IPC].”

“KEPCO will now take some time to review the decision of the court and decide the future direction of the project,” he said.

The IPC rejected the mine despite the prospect of $290 million in royalties and an even larger economic impact on the region.

“The project is not in the public interest because it is contrary to the principles of ESD [ecologically sustainable development] – namely intergenerational equity because the predicted economic benefits would accrue to the present generation but the long-term environmental, heritage and agricultural costs will be borne by the future generations,” the commission said in a statement in September 2019.

The commission’s detailed reasons also cited the likelihood of “long-term declines in groundwater over prolonged dry periods”, with a drawdown in groundwater reaching as much as nine metres in one area.

Rana Koroglu, managing lawyer for the Environmental Defenders Office in NSW which acted for the alliance, said the local community had fought for five years to save their valley.

“The community provided robust scientific evidence to the IPC on the detrimental environmental, social and economic impacts of the proposal to build a new coal mine in a highly productive agricultural area,” she said.

Mr Kennedy said the NSW Berejiklian should permanently bar mining in the Bylong Valley, and protect its farming through legislation.

“We also call on KEPCO to sell the 30,000 acres it bought in the valley back to the people so this region can once again be the strong farming community it used to be,” he said.

Catch all the day’s breaking news

At the end of each day, we’ll send you the most important breaking news headlines, evening entertainment ideas and a long read to enjoy.  Sign up here.

Most Viewed in Environment