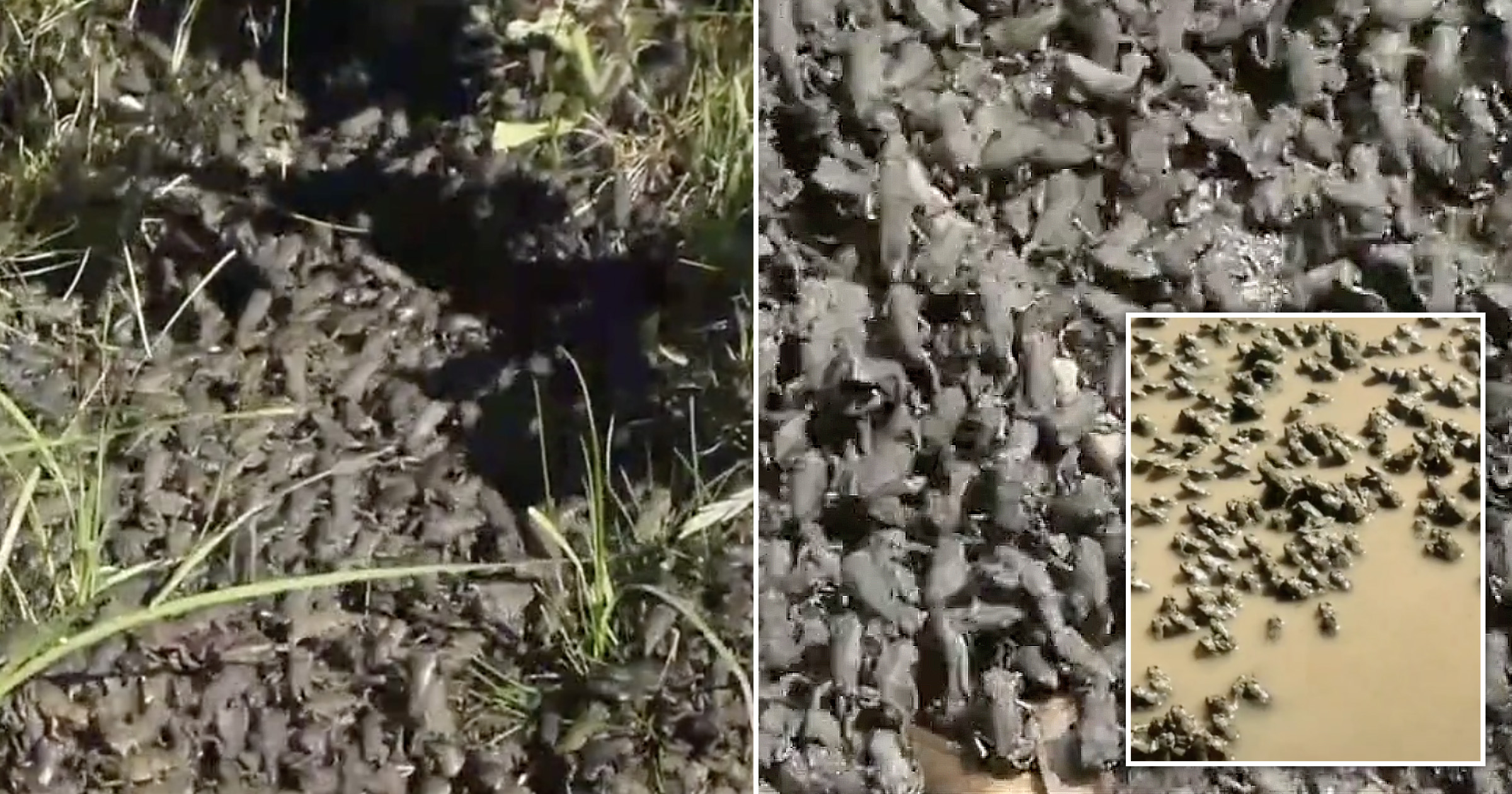 Filling your back garden to the brim with adorable frogs may sound great in theory – but in reality, it’s more harmful than you might think.

Recently, TikTok user Thinfrog revealed he had started building a ‘frog army’ in his back garden. He estimates that he has rescued 1.4million tadpoles from ponds in his local area that have dried up, housing them in a paddling pool.

Since then, Thinfrog has posted footage showing floods and floods of tiny frogs hopping around.

‘This is the biggest frog army ever, but I kind of regret this now because nobody can go in the garden,’ he said in one clip.

It isn’t just his garden this ‘frog army’ is said to have spread to. In another video, he says the fleet of amphibians had started to spread to other peoples’ gardens, with the invasion even leading to one neighbour moving away, he claimed in a now-deleted video.

With 1.9million followers, and 19million cumulative likes across his social media page, Thinfrog has caused a stir with his ‘frog army’ – but he’s not the only creator to mass-breed frogs like this.

The tag #frogarmy has over 400million views on TikTok, and countless amateur frog enthusiasts have been scooping thousands of tadpoles into backyard swimming pools and makeshift ponds since as far back as 2021.

With the ‘frog army’ trend gaining more traction online, some experts are concerned about the trend’s wider implications.

Dawood Qureshi, a marine biologist and researcher for BBC Wildlife tells Metro.co.uk that mass-breeding frogs like this can have several ‘adverse effects’.

‘Breeding that many frogs is definitely not good for the environment,’ she says.

‘It can cause an influx in frogs that wouldn’t normally survive in this environment, and that can have adverse effects such as too many predators of various insect species being released without many natural limits, which then decreases numbers of insects and can in turn have a negative impact on important processes such as pollination — a process that ensures food plants are growing and thriving.’

According to Dawood, an infestation of frogs like this ‘could also cause pest control to be called’, and lead to ‘collateral damage’ of other dead animals in the same habitat like rodents, hedgehogs, and foxes.

‘This, of course, ruins the food chain even further,’ she adds.

An especially vocal critic of Thinfrog is TikToker Froggie Biologist, an environmental consultant and qualified biologist.

In one video, which has amassed nearly 2million views, he warned that the frogs could be an ‘invasive species,’ which means that, if they’re in an area that’s not native to them, they have the potential to cause damage to other wildlife and natural resources in that area.

Ecologist Naomi Davis added in a statement to Metro.co.uk that the ‘frog army’ trend was ‘massively irresponsible from an ecological perspective’.

According to Naomi, some problems that can arise from breeding frogs in this way include the ‘potential cross-contamination of frog populations and water courses, inappropriate holding and release methods, and a complete lack of bio-safety.’

But is the ‘frog army’ even real?

Despite how widespread Thinfrog’s account has become, there’s evidence to suggest that his 1.4million ‘frog army’ is fake.

For one, that many tadpoles surviving into froglets isn’t likely.

‘The majority of these frogs will just starve to death because the habitat is not adapted for a “release” on that sort of scale,’ Naomi explains.

‘But in a moment of recognising that we all share one failing environment, the amphibian anarchy hits a bit closer to home. All are invited to participate. It impacts all of us.’

Thinfrog did not respond to Metro.co.uk’s request for comment, but we’ll update this article if he does.