The federal government is considering granting international travellers and returning Australians who can prove they have been vaccinated against coronavirus special entry into the country but experts are warning hotel quarantine arrangements may need to be in place for years.

The World Health Organisation's experts say people who have been vaccinated would still need to take the same precautions as now – including quarantine arrangements – until a level of herd immunity is achieved. 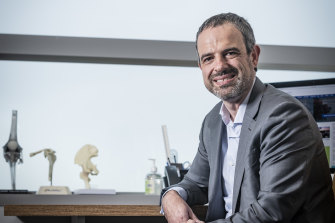 AMA president Omar Khorshid says governments will have to decide what level of population immunity coronavirus they want before opening up international borders. Credit:Tony McDonough

The federal Department of Health said it was not yet clear whether two of the main vaccines to be used in Australia, AstraZeneca and Pfizer, will prevent coronavirus being transmitted to others, although they are effective at reducing the severity of the disease.

Australian Medical Association president Omar Khorshid said it was clear Australia's quarantine arrangements were here to stay "until we have at least all of our vulnerable population vaccinated and possibly the entire population".

Governments would have to decide what level of immunity was needed before they reopened the international borders but with the virus expected to become endemic – that is, circulating all the time – Australia had to learn to live with it.

"At some point you've got to open up and accept that it is going to come through the population and just make sure that the vaccines have been distributed," Dr Khorshid said. "There is no doubt these vaccines are not the silver bullet for our borders and we're going to see quarantine stay in place for many months to come … if the government decides it wants the whole population vaccinated before we open up."

The federal government is aiming to start its vaccination program in March and have population-wide coverage by the end of October, although some people may not be able to receive vaccines because of pre-existing conditions.

The federal Department of Health said mandatory hotel quarantine was a key pillar of keeping the virus at bay in Australia and was still considered the best way to deal with people arriving from overseas.

"The Australian government is considering mechanisms for recognising an international immunisation certificate for COVID-19 and potential alternate entry and quarantine arrangements for returning Australians who may have been vaccinated if it is safe to do so," a department spokesman said.

The federal government determines the numbers of people who are allowed into Australia but the state governments are in charge of health-related quarantine procedures.

NSW Premier Gladys Berejiklian said she was not comfortable with having anyone coming from overseas not going through the 14-day quarantine system.

"Until such time that everybody is vaccinated … we have to keep all of our settings in place, including, fundamentally, our quarantine system," she said.

A spokesperson for the Victorian health department said hotel quarantine would continue to limit the possibility of the virus spreading in that state.

Adam Kamradt-Scott, a University of Sydney expert in the spread and control of infectious diseases, said Australia would likely need some type of hotel quarantine system for years to come.

He said danger spots would remain as wealthy countries such as Australia bought up limited supplies of vaccines using advance-purchase agreements, leaving poorer nations without any access.

There was also a possibility the vaccines may not deliver ongoing immunity, meaning people would need regular doses, similar to the flu shot, and making the campaign to provide worldwide coverage even harder.

"At this point in time, I would be [expecting] we are going to be living with the virus at least for the next five years, and it may never go away," Associate Professor Kamradt-Scott said.

"I suspect that we are going to have to have some form of hotel quarantine system in place for probably at least the next two years, if not longer. We may then also have to have restrictions on Australians going overseas and coming back."

A Qantas spokesman said hotel quarantine arrangements would be required until there was an effective vaccine rollout, "which is why we don't expect our international flights to resume in any real size until the second half of 2021".