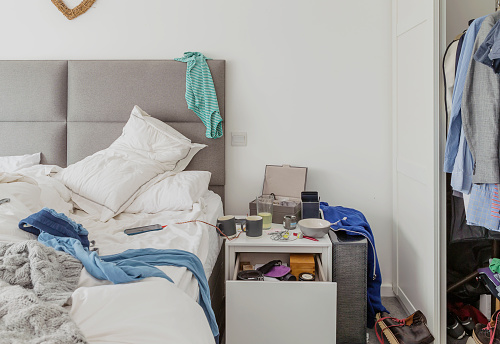 Does walking into a bedroom where you can’t see the floor set alarm bells off in your head?

You’re not the only one.

In fact, according to new data, 91% of UK women have confessed to having at least one ‘ick’ about a potential love interest’s bedroom.

Experts at Pizuna Linens conducted a survey of single women in the UK and found the top five common bedroom icks.

Coming in as the most popular one is unclean bed sheets – with 81% of women saying it would turn them off from a potential love interest.

A dirty bedroom and a messy bedroom came in at second and third, respectively – with 77% of women not being able to get past dirt while 58% couldn’t stand the mess.

Two other common icks included keeping the curtains closed all day and an unmade bed.

While mess can be easily fixed, almost half of women said that this ick would prevent them from visiting their love interest’s home for a second time.

About 32% stated they would only visit again if the issue was corrected.

Surprisingly, when asked if their own bedroom was ever in the same state as what they described as being icks, more than a third of respondents (36%) admitted that it was.

But it’s not all doom and gloom, as respondents were also asked to describe their top turn-ons when it comes to bedrooms.

What’s more, two fifths (41%) stated that clean bedsheets were appealing to them.

Aureen Chinchpure, brand communications manager at Pizuna Linens, commented: ‘It’s clear that the state of a potential love interest’s bedroom is of the highest importance among single women.

‘From an unmade bed to a lack of light, there are many potential areas of the bedroom that could turn out to be an ick.

‘It’s interesting to see that some participants admitted to having these habits as well, showing that no one is perfect when it comes to maintaining a clean and tidy bedroom.

‘On top of the advice that the team has included on maintaining an attractive bedroom, it’s vital that you regularly change and clean your bedlinen.

‘Not only will this help your room to be more appealing, it’s also important for your health and sleep quality.’

Rush Hour Crush – love (well, lust) is all around us

Tell us about your Rush Hour Crush by submitting them here, and you could see your message published on the site.