Home » Lifestyle » Google Salary-Sharing Spreadsheets Are All The Rage. Here’s What You Should Know.

“What’s the real value of my work?” It’s a question many of us wonder privately when negotiating salaries. Now, that information is becoming more public.

Workers across a number of industries are creating their own widely shared salary databases, with employees anonymously entering their earnings for all to see. In 2019, there were organized efforts to capture industry-wide salary information for arts and museum workers, media workers, baristas in different cities, workers at Jewish nonprofits, academics, design interns, workers in publishing, staff at creative agencies, and paralegals, just to name a few.

Adding salary info to these lists usually works like this: Through a Google Form, individuals enter information anonymously about their salary and organization, usually with the option to include years of experience, geographic location, race, gender and sexual orientation, as well as industry-specific information such as awards, worker injuries incurred or billable hours.

Responses then appear in a Google spreadsheet that is usually “view only,” so readers cannot edit or delete responses.

You may be one of the growing number of people anonymously scrolling through such a salary spreadsheet and considering adding your voice. Here are a few considerations you should make before you share. 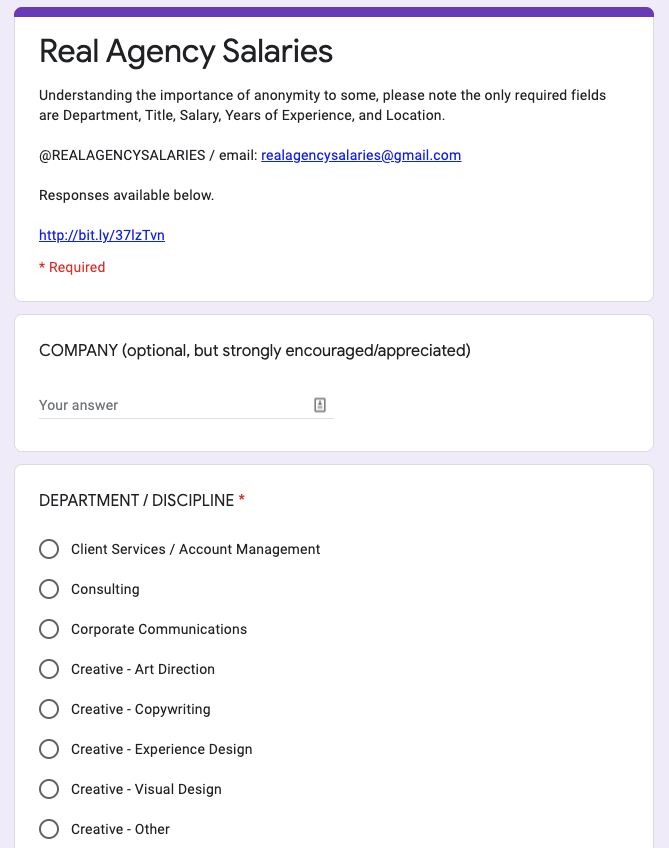 People are often advised to share their salaries with co-workers they know. Such whisper networks are valuable, but they can leave people out ― like workers just starting their careers.

They can also be limited by the constraints of a given field, as a spokesperson for the group that crowdsourced the salaries of arts and museum staff told HuffPost.

“Word-of-mouth in these fields is very limited, because many of these jobs are quite isolated geographically and because the field lacks standardized job titles and pay bands,” said a representative of Arts and Museum Transparency, who asked to remain anonymous. “Even in a major city where there are several institutions to compare positions directly, pay can vary wildly.”

If you are moving for a job, for example, you may lack insider information about the industry standard in your new hometown. That’s when a salary spreadsheet can help, said Cole Habersham, an account manager who is the founder of the spreadsheet Real Agency Salaries. Habersham cited a woman who was relocating to New York City from another country and used Real Agency Salaries to find out what copywriters there earned. The woman had a general sense of pay thanks to the website Glassdoor, “but she was able to find the exact agency that she was interviewing at,” Habersham said.

Glassdoor is one of several third-party businesses designed to publicly share employee salaries and company reviews, but it doesn’t display the gender or race of users next to self-reported information. On the spreadsheets, that information can provide important context for who is getting paid what.

“For women and people of color, which is the core audience that we had in mind when we created this spreadsheet, that information is particularly helpful, and it helps you understand what you’re making compared to your straight white male peers,” Habersham said.

Are There Risks To Participating In Salary Spreadsheets?

You may worry about getting into trouble if you share your salary on a public spreadsheet. And that’s an understandable concern. Erica Joy, a former Google employee, said she maintained a salary spreadsheet during her time at the tech company and faced retaliation when her manager rejected peer bonuses.

But discussing wages is allowed and protected in the U.S. for people who are employees protected under The National Labor Relations Act. The NLRA allows employees “to engage in other concerted activities for the purpose of collective bargaining or other mutual aid or protection.”

On its website, the National Labor Relations Board said this kind of “protection extends to certain work-related conversations conducted on social media.” The NLRA, however, does not cover every worker: Public-sector employees, agricultural and domestic workers, and independent contractors are not included, for example.

In other words, even if your employer publishes policies prohibiting you from sharing your salary, you have every right to do it ― or to participate in a salary-sharing spreadsheet ― if you’re an employee covered by the NLRA.

“People who are employees, treated as employees, have been able to assert their right as employees. In circulating this spreadsheet, they are acting concertedly, they are joining with their co-workers to say we think pay transparency is important,” said Sharon Block, executive director of the Labor and Worklife Program at Harvard Law School. “They cannot be fired for that. The law says they have a right to act concertedly.”

“Even if your employer publishes policies prohibiting you from sharing your salary, you have every right to do it … if you’re an employee covered by the National Labor Relations Act.”

But for people who are not covered under the NLRA, there is more risk. “If your rights aren’t protected by the National Labor Relations Act, technically an employer could say, ‘We don’t like this behavior, we don’t care that you’re doing it with other people, we are going to retaliate against you for it,’” Block said.

Anonymity has been helpful for people sharing through Google spreadsheets. “On our spreadsheets, we allowed submitters to be as specific or as vague as they wanted to be. This was important in a field with such small and specialized subfields,” said the Arts and Museum Transparency spokesperson.

How To Read And Interpret A Salary Spreadsheet

Keep in mind that working conditions and salary information are self-reported on these spreadsheets, so they cannot be verified.

As a reader, you’ll also face a technological constraint in that you can’t edit a locked Google spreadsheet to suit your own needs. “It’s kind of an overwhelming amount to scroll through,” Habersham said. He noted that this is why his group, Real Agency Salaries, is working to scale up from a Google spreadsheet to a salary compensation platform.

In the meantime, several organizers of salary transparency spreadsheets gave tips on how to apply what you learn from a spreadsheet.

Analyze the salary ranges. “Take it as an estimate and look at a range,” Habersham said. “If you’re looking at the general range and trying to find that happy medium, I think that’s where you’re better equipped to make an informed decision.”

Go in with a specific question. You can simply browse, or you can go in with a question about work you want answered, said the Arts and Museum Transparency group. “Depending on the data provided, that might be: How does an assistant curator’s position in Boston compare to an assistant curator position in Dallas? How does pay at a mid-size institution compare to a major one?” the spokesperson said.

To uncover pay bias, look beyond people like yourself. “If you’re in any of the statistically lesser-paid categories, you want to be looking at data without those labels on it,” said Rachel Kennedy, an art director and co-lead of Real Agency Salaries. “You really want to be looking at the data from a holistic point of view, versus looking at if I’m a woman, just the women, because obviously that will give me a skewed number.” She advises looking at people who are the highest-paid on the sheet.

There Are Other Benefits Beyond Salary Information

When you are in control of what is put into a salary database, you get to decide what variables are relevant to your employment circumstances ― which may differ from what an employer’s pay survey thinks is relevant. The spreadsheet for baristas in Philadelphia allows workers to share what kind of injuries they have experienced on the job, for example.

This is the kind of information that supports more than individual wins like a salary raise. When you take one kind of united action with your colleagues, it can inspire you to take others. “In submitting your own info, you volunteer to be a little vulnerable for the greater good, just like thousands of other workers in your field did,” said the Arts and Museum Transparency spokesperson. “They see you and you see them. It’s powerful and can be a major step towards bridging isolation and transforming the field through unionization and other acts of solidarity.”

Plus, talking online can normalize talking about it in person.

“Writing down your salary on a Google spreadsheet is the first step. And then maybe after you do that, you’ll be happy to talk to the person next to you about it,” Kennedy said.